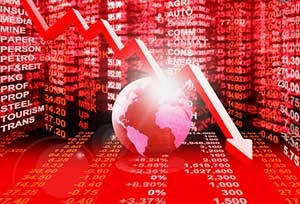 This is part of a larger trend that Money Morning Global Credit Strategist Michael Lewitt has said could lead to a stock market crash in 2016.

Here's what every single investor needs to know now…

The Reserve Bank of Australia (RBA) trimmed its cash rate by 0.25% to 1.50% today. It was the bank's first cut since May. The move is in response to record-low inflation and a slowing jobs market.

Australia's policymakers are concerned about the effects low inflation will have on wages and price-setting behaviors of businesses and households.

The RBA did not rule out further easing in the coming months, which only adds to the fears of a potential 2016 stock market crash.

Australia isn't the only nation turning to aggressive easing measures. Right now, there is a troubling trend among big banks around the world that could lead us to the next major stock market crash…

Big Banks Around the World Are Making a Grave Mistake

The government will allocate money to infrastructure projects for things like upgrading ports to accommodate foreign cruise ships and building food-processing facilities to increase exports of farm products. The package also aims to provide more help to Japanese citizens who say they haven't felt any benefits from more than three years under Mr. Abe's growth program dubbed "Abenomics."

Japan's government will hand out cash payments of 15,000 yen ($147) each to 22 million low-income people. It will also bring more people into a public-pension system by easing admission conditions based on premium payments. More college scholarships will also be offered.

An aggressive monetary move from Japan has been expected for weeks. Japan's stimulus today comes just days after the Bank of Japan eased monetary policy and announced plans to review its monetary stimulus program in September.

Today's rate cut from the RBA was also widely expected. So, market reaction to both was muted.

But investors should be worried. Today's moves from the RBA and Japan are more major warning signs and symptoms of a larger global concern.

Italy's banks are in serious trouble, and the Eurozone is on fragile ground after the UK's vote on June 23 to leave the European Union.

The Bank of England is expected this week to cut interest rates for the first time since the financial crisis and lower its UK growth forecasts by the biggest margin on record in the wake of Brexit.

Further easing is also expected from the European Central Bank in the coming weeks.

The ECB was the first major monetary institution to venture into negative rates in 2014. The ECB cut rates again in March and now charges banks 0.4% to hold their cash overnight.

Denmark, Norway, Sweden, and Switzerland all have negative interest rates.

In 2015, U.S. Federal Reserve Chair Janet Yellen sent a tremor through markets when she said a change in circumstances could put negative rates on the table in the United States.

"All this was done in the name of stimulating growth, but all it did was suffocate growth," Lewitt continues. "Now central banks have no cards left to play. This is the terminal stage of monetary policy."