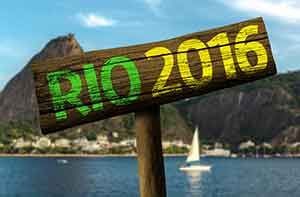 Already the global sports event has been plagued by controversy - toilets are blocked up in many of the competitors' dorms, sewage and trash continue to contaminate Rio's bay, and the threat of the Zika virus remains an ever-present concern.

Editor's Note: Combatting the Zika virus is expected to cost the United States an astounding $3.5 billion. Here's a breakdown of the numbers...

But if stock market history has taught us anything, it's that no matter how dire the surroundings may be, markets love the Olympics.

Here's a deeper look at how the market has performed amid the Olympics over the years, even in the worst of times...

There have been 26 Summer Olympic Games since 1900, with three canceled due to world wars.

The average rate of return for the DJIA during each was 4% from the opening ceremonies to the closing ceremonies. Pretty impressive, considering each Games lasts an average of only two weeks.

Some of the more notable years include: 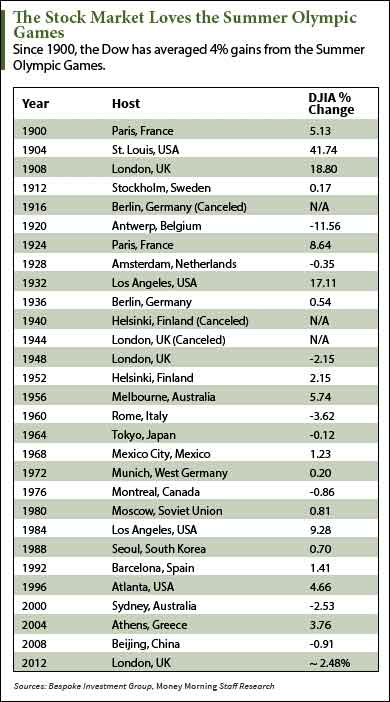 There are two main factors that contribute to market optimism surrounding the worldwide athletic event. They are:

In fact, some investors even take positions in companies affiliated with the Games ahead of time to net hefty profits...

Corporate Sponsors Have Never Lost at the Summer Olympic Games

One contributor to Olympic market optimism is corporate sponsors, such as Nike Inc. (NYSE: NKE) and The Coca-Cola Co. (NYSE: KO).

Since 1984, Nike has been a sponsor of the worldwide games and has boasted an average gain of 6.4%.

The Rio 2016 Olympic Games mark 88 years of partnership between The Coca-Cola Co., the International Olympic Committee, and the Olympic Movement.

In the past 28 years of that partnership (since 1988), Coke stock has realized gains in five of the seven games that took place. Most notably during the 1992 Barcelona Summer Games, when the stock rose 11% in just 12 days, from around $100 per share to $113.

A general feeling of optimism also contributes significantly to market surges amid the Summer Olympics.

This is happening right now in Brazil in particular, despite the country's ongoing economic and political woes. The Brazilian stock market started to see significant gains over the past month, and analysts expect the good times to continue through the games...

Market Optimism Against a Devastating Backdrop

"There is increasing optimism about Brazil's outlook right now, probably due to a combination of higher risks in the global economy that makes Brazil look relatively better, but also due to the signals so far from the new administration," said Arthur Carvalho, an economist at Morgan Stanley (NYSE: MS), in a July 8 report.

The International Monetary Fund (IMF) said on July 27 that it expects Brazil's economic growth to recover 0.5% in 2017 from a contraction of 3.3% this year. Carvalho was even more bullish and projected the Latin American country's GDP to grow 0.9% next year.

But any increase matters. Especially ahead of the Olympic Games in Rio, as morale in the Latin American country has been at an all-time low thanks to a 9.23% inflation rate and interest rates at a whopping 14.25%.

Up Next: Here are five easy-to-own stocks to buy today in order to achieve financial freedom for the rest of your life...