That's why Moors just recommended an oil exchange-traded fund (ETF) whose top four holdings are projected to return a combined 51.1% in the next 12 months.

Before we get to that oil fund, here's exactly how far crude oil prices have fallen in recent months… 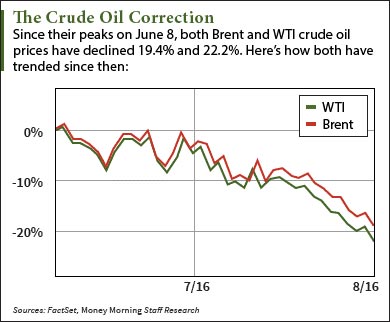 But WTI crude oil prices have dropped 22.2% since their June 8 highs. Since that peak was just short of two months ago, the drop technically constitutes a correction rather than a bear market. The latter has to be a decline of 20% or more over at least two months.

Take on Wall Street and Win: It's no secret the Wall Street system is rigged. But outsiders have taken on the system and won. Here's how they did it – and how you can do it, too…

Moors – a 40-year veteran of the oil and gas industry – says these bearish estimates are wrong because prices aren't falling due to supply and demand. They're falling because of "bandwagon" trading activity.

In other words, the presumption of the oil traders is causing the sell-off rather than oil itself. Traders have been pulling prices lower more aggressively than normal supply and demand factors can.

But Moors sees crude oil prices leveling off from here thanks to the drop-off in U.S. output…

Most producers right now get their output from "drilled but uncompleted" (DUC) wells, which is a well not drilled to peak output level. These are used to recover supply without drilling new wells that can cost millions of dollars to operate and maintain.

Editor's Note: One of the countless consequences of the Brexit vote is surging natural gas prices. But the worst has yet to come. Here's when the crisis could boil over…

Although they bring more supply online, DUCs don't recover as much supply as new wells. That means they represent gradually falling supply, which will boost prices by the end of 2016.

And Moors advises investing in oil ETFs to bank profits from this WTI crude oil price rebound. They don't require buying futures or specific oil stocks, which are usually riskier. 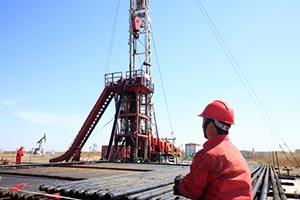 The VanEck ETF follows the MVIS U.S. Listed Oil Services 25 Index, which tracks 25 of the biggest U.S. oil field services (OFS) firms. These are companies that offer exploration and production services without actually producing oil themselves.

Many of the firms held in the fund are the biggest OFS providers in the world and boast market caps over $100 billion. These include Halliburton Co. (NYSE: HAL) and Schlumberger Ltd. (NYSE: SLB).

OIH is perfect for the current price environment since it doesn't hold small oil stocks. Bigger OFS firms are safer investments because they have more capital to get them through the ongoing debt crisis bankrupting smaller firms.

"A rule to follow when looking at an oil ETF when prices are this low is to avoid ETFs holding a lot of smaller firms," Moors said last month. "These companies can be risky as the debt crisis in the energy sector continues to unfold."

Next Up: This Trillion-Dollar Time Bomb Could Ruin Energy Infrastructure Forever