Once again this year, many healthcare insurers are requesting steep increases in the cost of Obamacare plans they offer on exchanges.

With 12.7 million Americans having purchased exchange-based plans under the Affordable Care Act (ACA) so far, the steady rate increases we've been seeing every year will have a national impact. 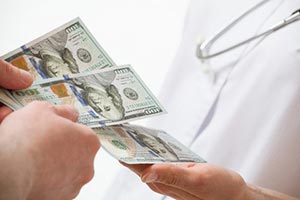 And this year the proposed Obamacare plan rate increases are higher than ever.

Right now the national average of the requested rate increases is 22.77%, according to data compiled by Charles Gaba on his ACASignups.net website. Gaba is a website developer who started compiling data on Obamacare out of a desire to track the running progress of the healthcare law.

Because Gaba's data is weighted by the number of customers each insurer has, it gives a more accurate picture of the impact of the Obamacare plan rate hikes.

Gaba's projection is based on the requests from the insurance companies, which are subject to approval by each state and/or the Department of Health and Human Services (HHS). Many of the larger rate requests later get reduced.

Last year Gaba projected an average rate hike of between 12% and 13%. The actual increase for 2016 – based on the approved increases – was 11.6%. The "effective" rate increase, which accounts for people switching to cheaper plans, was about 8%.

Don't Miss: The main problem with our do-nothing Congress isn't what you think. Here's the shocking truth about what lawmakers really do all day…

For 2017 Gaba suspects the average of approved Obamacare plan rate increases to land at about 18%, with plan shopping reducing the effective increase to about 14% — a jump of six percentage points from last year.

But the rate requests fall into a huge range, with the desired increases on some plans exceeding 60%.

There's also a lot of variation among individual states. The highest request in Gaba's data so far (13 states haven't yet posted their information) is Tennessee, with a weighted increase of 56%. Arizona (53.1%) and Oklahoma (51%) aren't far behind.

However, because of Obamacare's heavy subsidies of the premiums, relatively few of those on plans with steep rate hikes will feel the pinch. According to the Department of Health and Human Services (HHS), 83% of the enrollees in healthcare plans offered through Obamacare exchanges receive subsidies.

Who Really Pays for the Obamacare Plan Rate Increases

The easiest way to pay for the rising costs of Obamacare is simply to ramp up deficit spending accordingly. With the national debt at $19.4 trillion and climbing, it's not hard to imagine Washington choosing this option.

Anything that drives the United States deeper in debt is bad for the country, as it shortens the amount of time we have before that debt bomb goes off.

But lawmakers do have a second option…

Since the ACA law specified a series of taxes to offset the costs of the program, increasing the tax burden is a distinct possibility.

Read More: How Obamacare Will Gut Muni Bonds (Especially in These 7 States)

ACA taxes supposedly are aimed at corporations and the rich. But the stealthy nature of several of these taxes means the middle class will get stuck paying a significant chunk of them.

We could even see a combination of both as the issue of paying for Obamacare's rate increases grows more acute over the next few years.

Back in March, the Congressional Budget Office (CBO) raised the projected 10-year cost of Obamacare by $136 billion to $1.34 trillion.

The CBO said it expects premiums "to rise more rapidly over the 2017-2021 period" as the ACA's reinsurance provision (which reimbursed health insurers for their losses on Obamacare plans) phases out and the insurers adjust to the market.

Back in April, UnitedHealth Group Inc. (NYSE: UNH), the nation's largest health insurer, announced it would withdraw from nearly all of the Obamacare exchanges in 2017. Last month another top health insurer, Humana Inc. (NYSE: HUM), said it planned to drop out of at least eight of 19 marketplaces for 2017.

And just today (Tuesday), Aetna Inc. (NYSE: AET) announced it is backing off plans to expand its offerings on the exchanges in 2017 while "undertaking a complete evaluation" of its Obamacare business.

All three insurers pointed to millions of dollars in losses on their Obamacare plans.

Other big insurers also are having trouble making money on exchange-based plans. Cigna Corp. (NYSE: CI) has said it has lost money on Obamacare plans every year. Anthem Inc. (NYSE: ANTM), which had made a profit in earlier years, is projecting a loss for 2016.

Meanwhile, the nearly two dozen government sponsored co-ops, intended to be a low-cost option to the for-profit insurers, have fared even worse. All but seven of the original 23 have shut down, the victims of unsustainable losses.

With the rates on too many Obamacare plans insufficient to cover the costs, years of steep rate increases are just about inevitable.

And one way or another, it's the American taxpayer who will pay the price.

Up Next: "We Have Insurance, but We Can't Afford to Use It" – Paying the monthly premium is only part of the true cost of many Obamacare plans…

So what is your solution? We already know the problem.

President Obama is unconcerned about the increases. He has free health care for life. Perhaps as many as half of his supporters are unconcerned. They pay nothing. Why should the opinion of the rest of US matter ? We are only the ones paying for it.