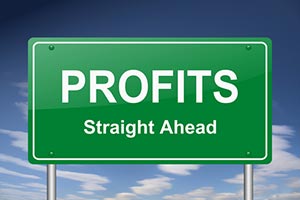 Historically, the stock market has been flat during the summer months. Since 1950, the Dow Jones Industrial Average has an average return of just 0.3% from May to October, according to the Stock Trader's Almanac.

But Money Morning's goal is to make investing profitable, no matter what the market is doing. That's why we're bringing our readers three of the best stocks to buy in August for long-term growth. And all three are in the tech industry.

"Part of knowing how to beat the market means knowing where the money will flow," Fitz-Gerald said.

And in their last quarterly earnings reports, the companies behind our three favorite stocks to buy had revenue of $6.44 billion, $17.5 billion, and $30.4 billion, respectively.

While each of these stocks is trading near 52-week highs, they all still have double-digit upside.

And because of how well these companies did in Q2, this might be the last time you see these stocks trading at these prices ever again.

The Best Stocks to Buy in the Tech Industry Today

Before Facebook Inc. (Nasdaq: FB) was launched in 2004, social networks were viewed as just a fad. Social media site Friendster once had a valuation of $53 million. Friendster shut down in 2015.

But CEO Mark Zuckerberg turned his dorm-room creation into a business worth $353 billion today.

And Zuckerberg's next big bet is in virtual reality (VR).

"After games, we're going to make Oculus a platform for many other experiences," Zuckerberg stated in a 2014 Facebook post. "Imagine enjoying a courtside seat at a game, studying in a classroom of students and teachers all over the world, or consulting with a doctor face-to-face – just by putting on goggles in your home."

Oculus will be a massive revenue source. By 2020, market firm Tractice projects sales from VR head-mounted displays, accessories, and content will reach $21.8 billion.

But those estimates may be too conservative.

Money Morning Director of Tech & Venture Capital Michael A. Robinson believes Facebook stock will trade for $250 by 2020. That's a potential profit of 101%.

It's also a good time to consider buying Facebook because it has beaten earnings expectations for three straight quarters. Facebook crushed earnings per share (EPS) and revenue estimates in Q2 of $0.82 and $6.02 billion, reporting $0.97 and $6.44 billion. 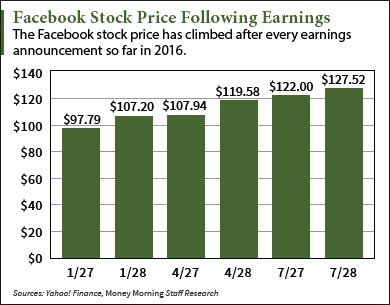 And there will be even more gains in the future…

FactSet has a price target of $934.51 for GOOGL stock. From today's opening price of $797.33, that's a potential profit of 17.2%. Money Morning Technical Trading Specialist D.R. Barton calls GOOGL a "legacy stock." That means it's a stock you want to buy and hold forever.

That's because of Alphabet's current and future profitability…

The tech giant is still the most dominant search engine on the planet and still appeals to advertisers. In its Q2 2016 earnings report, website revenue was $15.4 billion. That's a 24% gain year over year.

But what's really exciting is Alphabet's future revenue in its "Other Bets" sector.

Alphabet is working on:

Fitz-Gerald states that Fiber could end up as a competitor for Comcast Corp. (Nasdaq: CMST), Google's self-driving cars could challenge Tesla Motors Inc. (Nasdaq: TSLA), and the artificial intelligence program could become a standalone network.

Editor's Note: The best dividend stocks continue to raise their payouts. The best of the best do so for 50 years in a row… like these "dividend kings"…

But nearing $800 per share, it's true that GOOGL stock appears expensive.

Fitz-Gerald wants you to focus on the profitability of GOOGL stock, though, and not today's price.

"Some people gripe that at $780 a share, it's too expensive," Fitz-Gerald said. "Yet, there's no reason you can't buy a couple of shares at a time and tuck them away for a rainy day."

Amazon.com Inc. (Nasdaq: AMZN) started out as just a bookseller in 1995.

Today, Amazon accounts for 50% of all sales growth in the U.S. e-commerce market. It now does everything from selling groceries to streaming original television programming.

That's because of Amazon's dominate position in the emerging Internet of Things (IoT) market.

The IoT is a system designed to connect all electronic devices via the Internet. Currently, there are some very exciting real-life examples of IoT technology being used:

This market is still developing. But by 2022, Cisco Systems Inc. (Nasdaq: CSCO) projects the IoT industry will report $14.4 trillion in sales.

Amazon has entered this lucrative market with Amazon Web Service (AWS) IoT. AWS was launched in October 2015. It allows users to connect devices to cloud-based apps and interact with other users.

The Bottom Line: The three best tech stocks to buy in August are Facebook, Alphabet, and Amazon. According to FactSet estimates, all of these stocks are currently trading for less than what they should be. From today's opening prices, you could make profits of 23% on Facebook, 17% on Alphabet, and 15% on Amazon.

can CMCSA be bought as an option?