Access Your Profit Alerts
Sign Up for Money Morning and get your free report:
"The Best Stocks to Buy Now"
How to Buy Bitcoin
Twitter
Stocks: MOVE
View Comments

The mid-July, post Brexit run-up has given way to a mild pullback and… wait for it… another sideways box.

For more than two weeks, the S&P 500 has been virtually stuck in an amazing, maddening range of less than 1%.

This is an almost unheard-of level of inaction.

In fact, I went back through 10 years of data and could not find any other occurrences of a two-week range that was this tight.

This is really strange. But the good news is, it can't last.

Here's what I think will happen…

The Markets Are at a Dead Calm, but Only for Now

To see how unusual this is, all we have to do is look at the data on this chart I drew at the end of last week to see how exceptionally quiet this market action has been. Check out the Bollinger bands, in particular, the dotted line sandwiched between two solids. They're moving closer to the dotted average, which denotes very low volatility, in this case barely 4.5% over the past three weeks: 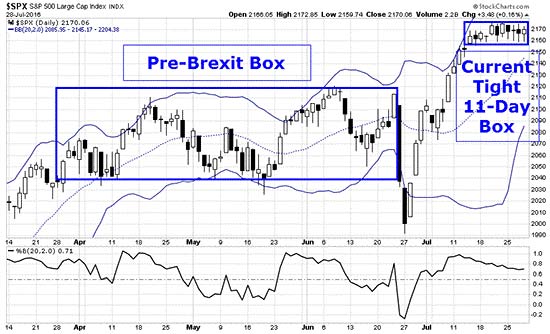 The laws of probability say that we can't keep this tight, "nowhere" market for much longer.

I'd be very surprised if we were through with the general upward thrust of the past few weeks.

As I said last week – market strength usually leads to more market strength, and this pattern is setting up like a classic "Edwards and Magee" continuation flag.

If you haven't had the chance to pick this classic up, I highly recommend that you do.

Of the many patterns they identified, one segment of the book is dedicated to continuation patterns – configurations that show up during established trends and traditionally lead to an extension of the trend. And in the chart above, the current setup is a classic.

I said it last week and I'll say it again.

From here, the market needs to get some relief from its overbought condition. This can happen in two ways:

However, I'm still expecting a modest (profitable) pullback before it heads upward once again. Usually, August is a more volatile month on the markets, but I don't think that will be the case for most of this month.

Just like a high-jumper at the upcoming Olympics, sometimes the market has to bend its knees before it jumps higher.

Here's What Will Move These Markets Higher

Right now, there are only so many catalysts in play that have the potential, at least, to snap these markets out of their pattern and send the bulls out once again…

Considering all this, I think we can look for some kind of break in this "tightness" in the next week or so, and I'll be watching closely. It's a safe bet that there will be some market indecision before the new direction becomes obvious, but I think it will be "up." And to new highs, at that.

Up Next: How to Make Money in Tight Markets

Profit opportunities in tight markets like this can be scarce, but our Bill Patalon has found a "door," something called " Public Law 94-29" that opens up the potential to earn $4,000 a month – or more. Click here for his research…

If you don't want an octogenarian to tell you the same thing twice, then don't invite the same comment twice. Idiot.

At the end of your sentence, did you really sign your name as…"Idiot"?

ahahahahaaa…it is implied I guess!!