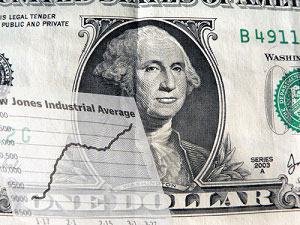 This morning, the Bank of England (BoE) cut interest rates by 25 basis points and boosted its quantitative easing program by roughly 60 billion pounds. This boosts its stimulus efforts to 435 billion pounds.

Of course, this is just more insanity from the central bank.

The BoE is doing the exact same thing we’ve seen from the Federal Reserve, the Bank of Japan, and the European Central Bank, but they’re hoping to get a different result.

Dow Jones futures projected a 38-point gain on news that the BoE has slashed interest rates and hiked its stimulus program.

According to the U.S. Labor Department, weekly jobless claims totaled 269,000. That’s slightly higher than the 265,000 forecast by economists. Today’s report is just a prelude for tomorrow’s big jobs report. The Labor Department will announce the U.S. unemployment rates for July and the number of jobs created in the country.

All of these stories shine the spotlight back on the U.S. Federal Reserve. Yesterday, Chicago Federal Reserve President Charles Evans said that the central bank could be ready for one rate hike in 2016. But the markets largely do not anticipate a rate hike. The Fed continues to tease a rate hike, but it’s beyond evident that our central bankers are in uncharted territories and don’t know what they are doing. When did the Federal Reserve go wrong?

The 2016 Summer Olympic Games kick off Friday, Aug. 5, in Rio de Janeiro, Brazil. Already, the headlines have centered on the Zika virus, potential terror plots, and filthy water. These Summer Games could be a serious challenge for Brazil to maintain. The Games are already under pressure due to a series of strange events long before tomorrow’s launch. Here are the top five unusual incidents ahead of the 2016 Summer Olympics.

Now here’s your list of top stocks to watch in today’s market, plus today’s economic calendar:

Don’t Miss: The best dividend stocks continue to raise their payouts. The best of the best do so for 50 years in a row… like these “dividend kings”…

17012 Reads
These 3 High-Yield REITs Pay 8%, 10%, and 12% Dividends
REITs produce gobs of cash from rent and other fees generated from properties including office buildings, storage units, multifamily units, and more.