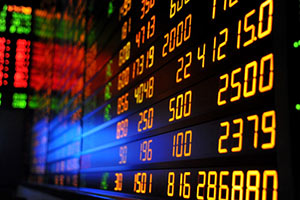 Dow Jones Industrial Average News, 8/4/16 – The U.S. Federal Reserve likely will not raise interest rates in 2016. Even though Chicago Fed Reserve Bank President Charles Evans said yesterday that the door was open… it has just slammed shut. In the last three days, central banks around the globe have announced significant stimulus efforts to boost struggling economic growth. The latest culprit: the Bank of England.

This morning, the BOE announced major easing measures that it hopes will boost growth. But the central bank is just the latest to test economic theory and hope for a much different result than what we've experienced over the last seven years. With foreign currencies in a race to the bottom, foreign banks are tying the Federal Reserve's hands. According to CME FedWatch – a tool that measures market expectations for future rate hikes – the probability of a rate hike in December now sits at just 34.4%. The index doesn't see the odds above 50% until well into the third quarter of 2017.

While the Bank of England dominated headlines on Thursday, a number of other key stories and profit opportunities likely slipped under the radar.

The ongoing downward pressure of central banks has to be a burden on Federal Reserve Chair Janet Yellen. One has to wonder if she will remain the head of the central bank after the 2016 election. Our Global Credit Strategist Shah Gilani said that he would want former FDIC Chair Sheila Bair in charge of the Federal Reserve given her reform goals and credentials. Though he admits this appointment is very unlikely, Shah explains what must be done and the challenges ahead for the next Fed chairperson.

Oil prices pushed higher today, fueled by news of a modest decline in domestic crude and byproduct inventories around the nation. Crude oil prices have declined sharply over the last two months as investors worry about rising U.S. supply. Our Global Energy Strategist Dr. Kent Moors has explained that this decline has also been driven by short sellers. Given that crude oil has floated around $40, it's clear that short sellers are taking profits. That, Moors explains, will help establish range-bound prices in the near future.

Here are the three best stocks to own as we enter this period of range-bound oil.