If negative-interest-rate policies (NIRP) sound like some kind of esoteric, unknowable concept, that's not by accident.

It's exactly what central bankers would like you to think.

In fact, it's very simple. Instead of being paid to lend money, negative rates mean it costs you to lend. It's like the laws of physics have been turned upside down, as though gravity began to push rather than pull.

This "Bizarro finance" underlying NIRP couldn't exist without fiat money and central bankers hell-bent on destroying its value. I first mentioned this last year, when I recommended a negative rate protective profit play that's since gone on to do better than double the markets' return. At that point, negative rates were already eating into Europeans' savings.

The situation has only gotten worse in the meantime, with trillions more in sovereign debt under negative rates, and as you'll see, more banks "offering" their depositors a negative rate.

That's right: NIRP could be the next hot European import, and the results could be devastating to the unprepared. But it will also work to turbocharge that protective profit play I told you about…

Savers Are Being Punished All Over the World

Back in March last year I told you about a Danish student, Ida Mottelson, who was working towards her master's degree in health sciences.

As it were, her bank told her she would have to pay a 0.5% fee to leave her funds on deposit. Ms. Mottelson was not happy.

Here's how rates have looked to European and Japanese "savers" over the past several years. The change has been dramatic. 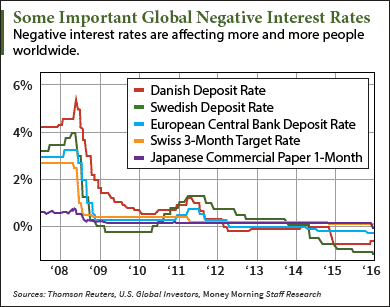 It seems that was only the beginning…

Just a few days ago, British bank NatWest, a subsidiary of taxpayer-owned Royal Bank of Scotland, warned business customers it "may have to charge to accept deposits."

This was the first sign of introducing negative rates in the United Kingdom, where NatWest has 850,000 business customers.

The bank indicated it had no plans to charge personal account holders… for now.

The trouble is, it's not going to stop with NatWest and the UK, or even in Europe.

ABN Amro bank of the Netherlands is a large institution with an international footprint.

It announced it could begin as soon as October passing on negative interest rates to its customers. According to the website www.nltimes.nl:

"From October 1, the Dutch bank is adjusting its conditions to state that the bank can give negative interest rates to account holders with a business checking or savings account, ANP reports.

According to ABN Amro, this conditions adjustment is to make sure the bank is able to respond to 'exceptional market conditions,' if necessary. The adjustment does not mean that the bank will immediately start charging customers a negative interest rate. The bank does not know when or if it will happen. 'Should it occur, we will strive to spare customers with a restricted balance as much as possible.'"

Interestingly, like Royal Bank of Scotland, ABN Amro is also government-owned and government-administered. Its CEO is Gerrit Zalm, the former Dutch finance minister.

American depositors (and their deposits) aren't on the chopping block yet, but the idea is being kicked around "mainstream" circles…

The Fed Is Attempting to Make NIRP Sound Normal

Fed Chair Janet Yellen has been subtly gravitating towards "normalizing" the idea, which has been appearing more and more frequently in the media echo chamber.

When the United States heads into its next recession, odds are negative rates will be on the table to help fight back.

Just think for a moment what kind of reaction from the masses negative rates on personal "savings" accounts would prompt.

We could be in for a good, old-fashioned "run on the bank" as depositors decide enough is enough. Of course, if fees are relatively small, like 0.5%, many may just accept that versus the inconvenience of withdrawing cash and having to stash it.

But many are likely to look at alternatives. And when money in the bank comes with a cost, savers will search even harder for yield.

And these shares will look even better…

This Fund Is Likely In for Another Round of Gains

Back in March 2015, I recommended the Nuveen AMT-Free Municipal Income Fund (NYSE: NEA). It's paid a tidy 9.6% since then, easily beating the Dow Jones Industrials and S&P 500.

At the time, I described it thus:

This is a closed-end fund holding an array of municipal bonds and currently yields an attractive tax-free 5.95% dividend. Given that this payout is tax-free, it's the equivalent of earning 8.5% for an investor in a 30% tax bracket. What's even better is buyers get a bit of a safety cushion, since the fund's currently trading at an 8.1% discount to its net asset value (NAV).

The broader bond market isn't necessarily a good bet right now, but if you look, there are bond ETFs that are downright attractive and more than worth buying.

There's no maturity to worry about, and these funds are far, far more liquid than bonds, even in tight markets. They're diversified, and they pay you each month.

Historically, municipal bonds have been relatively safe, with defaults only a very small fraction of those typical of investment-grade corporate bonds.

NEA could make sense for at least a portion of your cash allocation, which can compensate for the lack of yield on straight bank deposits.

Remember, when the masses start to realize holding a bank balance in their "savings" account is a liability, they're going to look for other options. Given the gains in NEA since March 2015, I'd say that's already begun.

Now's the time to look for alternatives, before NIRP becomes a North American reality.

How to Get Even More NIRP Gains: Shah Gilani has developed an easy trade that could bring you even more gains when it's time for Janet Yellen to pull the trigger on NIRP. It's really easy to make, and it's the perfect pairing with Peter's NEA recommendation. Click here to get Shah's "Sub-Zero" negative-interest-rate briefing, and you'll get his Insights & Indictments service, too, at no charge.