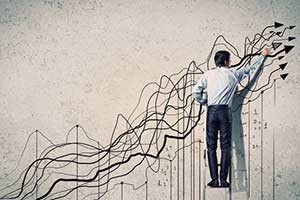 Dow Jones Industrial Average News, 8/05/2016: Friday morning will be all about jobs.

This morning, the U.S. Labor Department announced the July unemployment rate held steady at 4.9%. This morning's jobs report indicates that the United States saw an increase in 255,000 jobs last month, easily surpassing the economist expectations of 180,000.

Despite the positive report, the nation is still experiencing lackluster economic growth. CNBC reports that GDP growth over the first half of 2016 sat at roughly 1%.

Now, let's get to today's top stock market news, stocks to watch, ways to profit, and economic calendar for Aug. 5, 2016.

Dow Jones futures projected a 42-point increase after the positive jobs report. Gold prices and silver prices were down slightly but remained steady after the monthly jobs update.

Today's jobs report puts the Federal Reserve in focus this morning. The ongoing downward pressure of central banks has to be a burden on Federal Reserve Chair Janet Yellen. One has to wonder if she will remain the head of the central bank after the 2016 election. Our Global Credit Strategist Shah Gilani said that he would want former FDIC Chair Sheila Bair in charge of the Federal Reserve given her reform goals and credentials. Though he admits this appointment is very unlikely, Shah explains what must be done and the challenges ahead for the next Fed chairperson.

Crude oil prices were sliding this morning. As our Global Energy Strategist Dr. Kent Moors has explained, prices have faced downward pressure due to ongoing short sellers in the commodities markets. With short selling on the decline, we are about to enter a period of "range-bound" oil prices, which can be very profitable for the savvy investor.

This morning, WTI crude was off 0.6%, while Brent crude prices fell 0.6%. This afternoon, domestic oil production will be in focus after Baker Hughes Inc. (NYSE: BHI) announces its weekly rig count. Expect some sharp upward movement if we see a decline in domestic rigs.