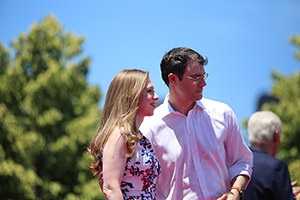 Mezvinsky is a hedge fund manager who opened a division in his fund in 2014 that lost millions of dollars...

But before we get into the details, here's Mezvinsky's background...

Who Is Chelsea Clinton's Husband?

Mezvinsky first met Chelsea in 1993 when the two were teenagers at a Democratic political retreat in Hilton Head, South Carolina, according to U.S. Weekly. They became friends and Mezvinsky, who attended Stanford, gave her a campus tour when she was deciding which college to attend in 1997.

But the duo didn't form a romantic relationship until much later...

After ending her relationship with writer Ian Klaus in 2005, Chelsea dated Mezvinsky. They became engaged in November 2009 and married in July 2010.

Because hedge funds are private investment groups, they don't have to reveal their financial transactions. But according to The New York Times, Eaglevale raised $25 million to buy Greek bank stocks and government debt.

You see, Mezvinsky believed that the Greek economy would recover from an economic crisis that started in 2009. The crisis had been so bad that Greece was forced to request two bailouts between 2010 and 2012 worth $316 billion. But the outlook was better in 2014, as the government predicted a structural surplus.

Indeed, Greece's economy looked like it was recovering in 2014 -- but Eaglevale made a classic mistake...

Chelsea Clinton's husband forgot the old adage and bought into the height of the recovery.

Instead of buying low and selling high, Mezvinsky was forced to do the opposite. The Greek economy collapsed further after Mezvinsky's investments, becoming the first developed country that was unable to make an International Monetary Fund (IMF) payment for its debt in 2015.

In March 2016, Eaglevale closed down the Hellenic fund.

The chart below shows the MSCI Greece Index, which tracks the performance of the Greek economy. The green arrow shows roughly where Eaglevale bought Greek bonds and debt... and the red arrow shows where it was forced to sell:

The hedge fund lost 90% of its clients' money, which would be roughly $22.5 million if $25 million were invested.

Up Next: These Billionaires Are Trying to Stop Trump at All Costs

Will Hillary Clinton rely on her son-in-law for her economic policies? Let us know on Twitter @moneymorning and on Facebook.

Keep me informed on the Mezvinsky cretin so I can short his next buys.

I recently read that Chelsey and hubby just bought the largest luxury condo in all of New York City! I wonder how such a bad investment manager and the daughter of public servants can afford that.