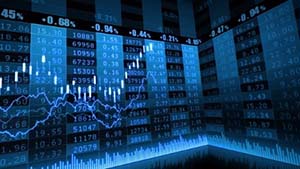 On Tuesday, the Dow Jones Industrial Average and the S&P 500 finished flat after early intraday gains.

Traders continued to eye oil prices, which remain stubbornly low due to ongoing concerns about a global supply glut.

But while investors watched commodity prices, a number of different profit opportunities emerged for savvy investors. Before we get to those stories, check out the results for the Dow Jones, S&P 500, and Nasdaq:

The Dow Jones Industrial Average eked out gains on Tuesday, adding three points on the day.

Meanwhile, the Nasdaq and S&P 500 were holding on in the final minutes of trading to finish the day in the green. One thing is certain: There is little fear out there right now. The CBOE Volatility Index (VIX) – which is widely considered to be the market's fear gauge – is trading at its lowest levels of the year. Today, the VIX sat at 11.6.

Crude oil prices were falling as concerns about global oversupply again reemerged. WTI crude was off 0.8%, while Brent crude prices fell 1.1%. Falling prices have boosted speculation that the Organization of Petroleum Exporting Countries (OPEC) will reduce production. The global oil cartel has announced plans to meet in September.

Meanwhile, investors await tomorrow's critical update on crude inventories from the U.S. Energy Information Administration. Shares of Exxon Mobil Corp. (NYSE: XOM) and Chevron Corp. (NYSE: CVX) were both up 0.1% on the day.

On the deal front, shares of Monster Worldwide Inc. (NYSE: MWW) rallied more than 22% this morning on news that the human resources giant will be purchased by Randstad Holdings for $429 million. The deal is worth $3.40 per share, but that is far less than the $90 per share that MWW stock traded at during the dot-com bubble years.

Now, let's look at the day's biggest stock movers and your stock insight of the day.

Up Next: There is a groundbreaking new technology that's revolutionizing the biotech industry and leading to the creation of a new field worth $25 billion. Money Morning Director of Tech & Venture Capital Michael A. Robinson has found the best way to tap into this exciting new field. Not only is this one of the best biotech stocks to buy in bioelectronics, but it's also tapping into another $200 billion industry… Here it is.