While most voters will have the option of casting a ballot for the two main third-party candidates, neither has much chance of winning any electoral votes, much less the 270 required to win the White House.

That’s because the American electoral system is rigged in multiple ways to discriminate against third-party candidates such as Libertarian Gary Johnson or Green Party candidate Jill Stein. 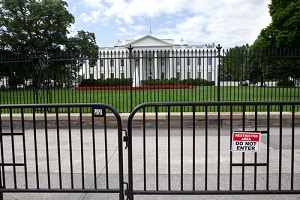 That’s just fine with the Democrats and Republicans. They may dislike each other but they’re happy with a system in which they have just one opponent to beat.

But for American voters, the barriers set before third-party candidates effectively limit who can win, even if they manage to get listed on the ballot.

That’s especially frustrating this year, with both Hillary Clinton and Donald Trump actively disliked by majorities of the electorate.

Only 17% of voters view Libertarian Gary Johnson unfavorably — but 44% said they’ve never heard of him. That’s a big reason why Johnson is stuck at 12% in the poll, far behind the 44% for Clinton and the 35% for Trump.

Exposed: The real reason Congress gets nothing done isn’t partisan gridlock. It’s that the primary duty of our elected representatives is no longer making laws – it’s this…

And the way the system is rigged, the odds are about zero that either Johnson or Stein ever will be able to get any significant traction in the polls.

So how did we end up with a system that shortchanges third-party candidates as well as the American electorate?

Part of the blame can be laid at the feet of the Founding Fathers, but the two major parties also have done whatever they can to sabotage third-party candidates…

Let’s start with the U.S. electoral system, particularly as it pertains to the election of a president.

Ironically, the Founding Fathers were wary of political parties in general, much less a two-party system.

“There is nothing which I dread so much as a division of the republic into two great parties, each arranged under its leader, and concerting measures in opposition to each other,” wrote John Adams, America’s second president, in 1780. “This, in my humble apprehension, is to be dreaded as the greatest political evil under our Constitution.”

And yet the Constitution practically guarantees such a result.

The key element has to do with the structure. In U.S. elections, individual candidates run for each office; the person who gets the most votes wins. This directly leads to a two-party system, something called “Duverger’s Law,” named after the French sociologist who first described it in the 1950s.

The law suggests that in a U.S.-style system, the fewer the number of parties, the greater the odds of winning. That encourages political forces to gravitate into just two camps.

Voter behavior also contributes to the dominance of just two parties; few wish to vote for third parties that stand no chance of winning any representation.

Third parties face an extra hurdle in U.S. presidential elections via the Electoral College, which requires candidates to win the majority of the votes in a state to earn its electoral votes.

In 1992, Ross Perot won an impressive 18.9% of the popular vote, but no states and thus zero electoral votes.

In countries that have multiple parties, voters cast ballots for parties, not individuals. Each party that gets enough votes to earn seats then assigns those seats to members. The number of seats each party gets depends on the percentage of votes they earn. So voting for a third party (or a fourth or a fifth) can result in increased representation for that party, even if it only wins 5% of the total.

The leader of the party with the most votes typically becomes the head of state, rather than standing for election against other individuals as occurs in the United States.

So the absence of proportional voting is the biggest obstacle third-party candidates face in the U.S. – but it’s not the only one.

Over time, the two-party system has developed a range of strategies designed to strengthen their choke-hold on the U.S. political system…

One way the major parties have stacked the deck against any third-party challengers is through ballot access restrictions. To run for president, a third-party candidate must apply to get on the ballot in each of the 50 states and the District of Columbia.

The cumbersome process has meant that third-party presidential candidates rarely appear on the ballot in every state. So far this year, the Libertarian Party has achieved ballot access in 38 states, the Green Party just 24.

Another tool is by limiting the exposure third-party candidates can get via presidential debates. The Democrats and Republicans ensured control of this in 1987 when they created the Commission on Presidential Debates.

In 2000, the CPD set a requirement that a candidate reach 15% in five national polls to be included in a debate.

Even that hasn’t satisfied the Big Two. In 2012, Green Party candidate Jill Stein was arrested and handcuffed to a chair for eight hours just for trying to enter the grounds of a presidential debate at Hofstra University.

Each major party is eligible for money from the Presidential Election Campaign Fund, paid for by a check-off box on IRS tax returns, after they’ve been officially nominated. Third parties can only get this funding after the election is over, and only then if they receive at least 5% of the vote.

In 2012, the major parties both received more than $100 million each in such “public funds.”

Finally, there’s the issue of media coverage. Mainstream media tend to focus mostly on the major-party candidates, treating third-party candidates as eccentrics who have no chance.

This a system that demands change, but is rigged to maintain the status quo.

Unless American voters do something radical – like vote for third-party candidates instead of the subpar offerings from the two major parties – they won’t get better choices for president.

When Robber Barons Bought a President: The rapid increase of big money spending on political campaigns politics in recent years has raised concerns that the rich are “buying” elections. It’s a valid concern because it’s happened before – 120 years ago…