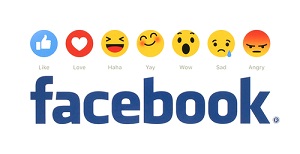 Under the impressive leadership of CEO Mark Zuckerberg, the Facebook stock price has climbed 229% since its 2012 IPO. But we're looking at the future when considering if FB stock is a solid investment.

And we discovered a billion-dollar trend that will fuel FB stock price growth over the next two years. Because of this trend and Zuckerberg's leadership, Money Morning projects the Facebook Inc. (Nasdaq: FB) stock price will trade for $250 per share by 2020. That's a gain of 99% from today's opening price of $125.34.

Today, we are going to show our subscribers this billion-dollar trend. But first, we wanted to make sure our Money Morning readers know why the Facebook stock price has soared 7% in the last month.

The biggest reason for the FB stock climb this month is Facebook's last earnings report.

And outside of Facebook, user growth for its other services was equally impressive.

In 2012, Facebook purchased picture app Instagram for $1 billion in cash and stock. It had just 30 million total users at the time of the purchase. Today, Instagram has over 500 million MAUs.

While all of those numbers have given the Facebook stock price a 7% bump this month, we found one trend that will cause FB shares to soar. In fact, we see it climbing 99% by 2020 because of this billion-dollar trend.

And the following chart shows you everything you need to know… 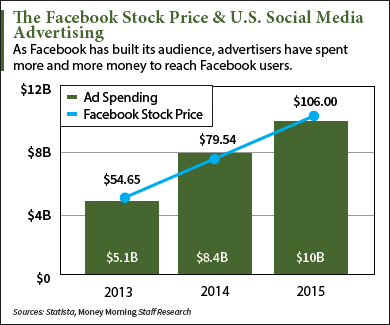 From 2013-2015, social media ad spending in the United States has increased from $5.1 billion to $10 billion per year, according to research site Statista. That's a 96% increase.

From 2016 to 2018, Statista projects social media ad spending in the United States will increase by another 28%.

Traditionally, advertisers relied on formats like television, radio, and newspapers for marketing. But advertising on these platforms isn't as powerful as it once was:

Television, radio, and newspaper user bases have declined, limiting the impact of ads on those platforms.

But Facebook's user growth is thriving, and users are spending massive amounts of time on Facebook. As of Q1, Facebook users spent an average of 50 minutes a day on the platform.

That's plenty of time for advertisers to have their ads seen.

COO Sheryl Sandberg stated in the Q2 2016 earnings call that the company has worked hard to make advertising for businesses as easy as possible.

Plenty of analysts see Facebook stock climbing because of Facebook's large and engaged audience. FactSet has a price target of $153.14 for FB stock. That's a potential profit of 22.17% from today's opening price of $125.34.

But Money Morning Director of Tech & Venture Capital Michael A. Robinson has an even bolder prediction…