The Disney stock price today (Wednesday) is climbing after earnings, and today's news reinforces what we have been saying about Disney stock in 2016. It has numerous catalysts that make it a great long-term investment. 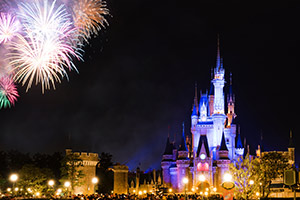 Before we get into why we are bullish on the Disney stock price today, here are the must-know details from yesterday's earnings report...

Editor's Note: The Internet of Things will revolutionize the way we live. And five companies will be at the center of this $6 trillion revolution...

Operating income for Disney's studio segment came in at $766 million. That easily beat the $720.7 million analysts expected. The company said operating income was boosted by the success of its films "Captain America: Civil War" and "Finding Dory."

CEO Bob Iger said in a statement the company's results show the company has a diverse business model.

And strong Q3 results aren't the only reason the Disney stock price today is higher...

The company also announced it is taking a minority stake in BAMTech, which will be separated from Major League Baseball's digital arm as part of the deal. Disney will pay $1 billion in two installments for the stake. It has an option to acquire majority ownership in the future.

BAMTech will work with ESPN to launch a direct-to-consumer, subscription streaming service. It will feature live sporting events at the regional, national, and international levels. However, current content on ESPN's linear networks will not be part of the service.

Disney said its ability to stream live sports and live programming is a competitive advantage and necessary in today's world. Live TV, and particularly sports, is one of the biggest draws for traditional television. Disney's cable network revenue grew 1% to $2.09 billion in Q3, thanks in large part to growth at ESPN.

While these quarterly numbers are obviously bullish for the Disney stock price today, we're taking a longer view at the stock.

The first major catalyst for the Disney stock price today is the company's film division.

The next installation in the Star Wars universe, "Star Wars: Rogue One," will be released on Dec. 12. "Rogue One" is the company's first standalone Star Wars movie. Disney believes the excitement is comparable to "The Force Awakens" based on trailer views. Another major release this year is Marvel's "Dr. Strange."

Success with its animated movies is Disney stock's second huge catalyst. "Finding Dory" was Pixar's biggest opening movie in its storied history. The film made $135 million in its opening weekend and has grossed $422.5 million in the United States as of July.

The third catalyst for Disney stock is theme park growth both here and abroad. Its $5.5 billion Shanghai resort, which opened on June 16, is the largest yet for Disney. Since its opening, Shanghai Disney has had over 1 million guests. Disney said it sees plenty of room to expand the Shanghai Disney resort.

A number of analysts are also bullish on the Disney stock price today...

Editor's Note: Voters who don't like Trump and Clinton are seeking a third candidate. Most people don't realize it, but they already have one...