Dow Jones Industrial Average News, Aug. 10, 2016: Not even the magic of Walt Disney Co. (NYSE: DIS) could save the markets from a sharp downturn today (Wednesday, Aug. 10). Falling oil prices and energy stocks continue to pull down the broader markets. While six of the major S&P 500 sectors traded lower today, a number of profit opportunities slipped under the radar.

Before we get to those breakout opportunities, check out the results for the Dow Jones, S&P 500, and Nasdaq… 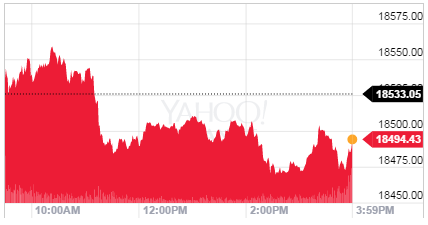 Editor’s Note: The Internet of Things will create a massive $6 trillion market. These five stocks will be the best way to make money from this lucrative market…

Gold prices were climbing higher on weaker than expected economic data. Prices pushed past $1,350 per ounce as investors continue to weigh the ongoing actions of central banks around the globe and expectations for an interest rate hike in 2016. Here’s a more detailed recent price overview.

Crude oil prices fell after government data indicated a surprise increase in U.S. oil supplies and a boost in Saudi output brought new concerns about a global glut. WTI crude was off 2.5% to $41.71, while Brent crude prices dropped 2.1% to $44.05. The U.S. Energy Information Administration announced U.S. crude inventories increased by 1.1 million barrels last week. The government agency did announce a large drawdown in gasoline inventories. Across the globe, Saudi Arabia is pumping oil at record levels. The Kingdom produced more than 10.67 million barrels per day in July.

Falling prices has boosted speculation that OPEC will reduce production. The global oil cartel has announced plans to meet in September. We’ve seen this drama before. Last year, Saudi Arabia was working to lead an agreement among OPEC producers to lower its production targets. However, Iran – a growing political threat to Saudi Arabia in the region – has refused to cut its production as the nation returns to the global oil markets. Iran had been prevented from bringing crude to the global markets due to economic sanctions related to its nuclear program.

Of course, the big news today was out of China about Tesla Motors Inc. (Nasdaq: TSLA). Reports said a driver got into a one-person crash after using the vehicle’s autopilot mode. This is the first known vehicle accident for the company in China. The driver said the salesperson at Tesla told him the vehicle was “self driving,” implying that it didn’t require human intervention.

Don’t Miss This Opportunity: Famous investors like Warren Buffett and Jim Rogers have taken on Wall Street corruption – and won. Here’s how they did it – and how you can do it, too…

Up Next: There is a groundbreaking new technology that's revolutionizing the biotech industry and leading to the creation of a new field worth $25 billion. Money Morning Director of Tech & Venture Capital Michael A. Robinson has found the best way to tap this exciting new field. Not only is this one of the best biotech stocks to buy in bioelectronics, but it's also tapping into another $200 billion industry… Here it is.