We're in the midst of a very profitable moment for dealmaking, especially in the technology sector. The three hottest M&A transactions of the past three months were worth $33.8 billion – a fraction of the $2 trillion in deals announced this year.

Companies like Microsoft Corp. (Nasdaq: MSFT) and Verizon Communications Inc. (NYSE: VZ) are going out and buying firms like Yahoo!, Fleetmatics, and LinkedIn because they offer the irresistible promise of massive growth without the long, drawn-out process (and even higher price tag) of R&D, where there are no guarantees of success.

So you can see why deals are appealing to these huge, cash-flush companies.

But these deals are a great thing for investors, too. Deals can be some of the biggest profit catalysts on the market, in many cases doubling investors' money as the ink dries.

Then again, there are some unique challenges for investors looking to play these profitable special events: Pinpointing when those deals will happen – and who will be doing the buying – is a must.

You don't need to be able to tell the future, though – I'm going to tell you how you can make an "end run" around that particular challenge.

All you have to do is grab the investment I'm going to share with you, sit back, and bank the profits…

Tech Deals Are the Richest, Most Frequent 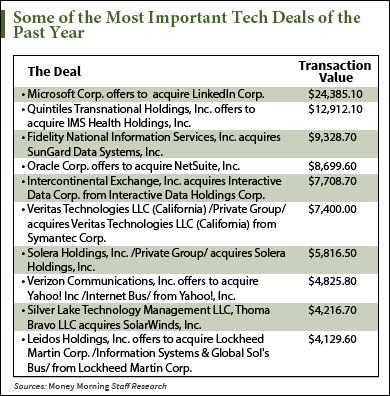 Japan's SoftBank Group Corp. (OTCMKTS: SFTBF), a web and telecom conglomerate with ties to China, recently decided to buy UK chipmaker ARM Holdings Plc. (Nasdaq ADR: ARMH). SoftBank made the $32 billion move to expand into the Internet of Everything and plans to produce 1 trillion ARM chips in the next 20 years.

Of course, many tech mergers still come about because the buying firm wants to take out overlapping products from a competitor and lower costs. That was a big driver behind the $14.8 billion bid Analog Devices Inc. (NYSE: ADI) made for rival Linear Technology Corp. (Nasdaq: LLTC).

Around the world, bankers have been keeping busy helping firms tie the knot. And those bankers are naturally busiest with acquisitive tech firms on the lookout for the strongest growth they can buy.

According to Dealogic, global technology acquisitions thus far in 2016 have surpassed $400 billion, up 27% from the same period last year. We're within striking distance of the all-time record set last year.

It's been a key theme for investors going back since 2000, and it will remain a key theme in coming decades as long as young, innovative firms pioneer new technologies that the big firms must control.

That's why I think tech investors ought to own the Technology Select SPDR ETF (NYSE: XLK).

Strictly speaking, XLK is not focused on M&A.

Instead, it covers the entire tech sector – and so this exchange-traded fund (ETF) benefits greatly from ongoing, accelerating high-dollar buyouts and lucrative tech trends.

XLK wisely avoids focusing on just one area of tech. The portfolio has stakes in the top firms in the S&P 500 in areas like hardware, storage, telecom equipment and services, cloud computing, semiconductors, mobile software, and Internet software and services.

In this $12.5 billion fund, you'll find the firms I've so far mentioned: Microsoft, Oracle, Analog Devices, and Linear Technology are all there. And so are many other leading tech firms, including Apple Inc. (Nasdaq: AAPL) and Intel Corp. (Nasdaq: INTC).

Buy the Biggest Buyers All at Once

While this fund gives us broad and deep exposure to key tech niches, so do many of the firms in the fund themselves. They've built solid growth platforms from scratch, aided by a steady slate of acquisitions.

Cisco Systems Inc. (Nasdaq: CSCO) has parlayed its first-mover advantage in the network equipment segment into many more fields. And it's done so with an exhaustive list of acquisitions. Cisco prefers to focus on smaller, private tech firms, continually looking to build an edge in hot new growth categories. For example, just in 2016 so far, Cisco has made three cloud-centric buyouts with CliQr Technologies Inc., Synata Inc., and CloudLock Inc.

Broadcom Ltd. (Nasdaq: AVGO) has used M&A to build one of the broadest sets of computer chips that underpin the current explosion in wireless data communications. Broadcom avoids small "tuck-in" acquisitions and looks for targets that can add at least $1.5 billion in sales. The firm is even open to $10 billion deals – if they meet the criteria. Each deal must provide access to a new segment of the $335 billion global chip market.

Western Digital Corp. (NYSE: WDC) could have stood idly by as its core hard-disc memory market slowly gave way to more advanced flash-based drives. Instead, Western Digital used its massive levels of profits to acquire flash memory leader SanDisk Corp. (Nasdaq: SNDK) in early 2016 for $16 billion. That move boosted Western Digital's sales base from $13 billion to more than $17 billion. With more than $8 billion in cash in the bank, this firm has plenty of money to invest in its growth or to find other great buyouts.

Cognizant Technology Solutions Corp. (Nasdaq: CTSH) is a master of this craft. While the IT services leader has steadily added market share with its own strong offerings, it has also used M&A to boost sales. We're talking a sevenfold increase from $2 billion back in 2007 to today's sales of nearly $14 billion. The firm prefers to make smaller moves that largely fly under the radar and bulk up from there.

As you can see, M&A is great news for buyers, sellers – and investors. It's a clear path to growth for many firms, especially those that do it right.

And XLK offers us a great way to play this trend. At the same time, we also profit from the fast growth and high profit margins the tech industry provides.

Trading at just $47, this is a well-run ETF. It has a cost ratio of just 0.15% and a four-star rating from Morningstar – meaning it meets all three tests in my "ETF Profit Screen."

Plus, you get a solid track record with this broad-based ETF. Over the past two years, XLK has gained 22.5%. Over the same period, the S&P 500 is up 14.3%, meaning this tech ETF beats the broader market by more than 57%.

In other words, this is the type of tech investment that can give your portfolio much more than just a solid base.

It stands to benefit from both the tech sector's organic and M&A growth for several years to come and offers a stable, cost-effective vehicle that's tough to beat.

Developing Tech Story: Doctors have discovered a method of switching off pain, anywhere in your body, almost instantly. It's non-invasive, drug-free, and has no dangerous side effects. For patients suffering any kind of pain, the benefits are clear. But there's a twist in the story: It's also about to set off a period of "economic nirvana."  Click here to continue reading…

I switched over to the neural and VPU pitch, and..well I'll cautiously read your postings to keep up with tech progress.

Thanx and be well