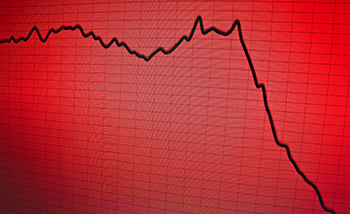 We just received the biggest 2016 stock market crash warning sign we've seen all year. And it came from one of the most legendary investors in the world.

On Monday, Aug. 8, Marc Faber – the famed Swiss investor and author of the "Gloom, Boom & Doom Report" – told CNBC stocks will fall much lower this year.

Editor's Note: Most people associate the Bill Clinton years as a booming era for the economy. But that couldn't be further from the truth. Here's why…

Faber has been bearish on stocks since the market crawled out of the recession in October 2009. At the time, he warned that U.S. stocks were "very overbought."

When asked why a 2016 stock market crash will happen, Faber said the rally hasn't been driven by "genuine" buying. In other words, the only things causing the rally are stock buybacks, takeovers, and M&A activity.

But these are just a few reasons why we're headed for a 2016 stock market crash.

3 Reasons We Could See a 2016 Stock Market Crash

Three factors that will cause the stock market crash are negative interest rates, the U.S. Federal Reserve's faulty economic data, and declining earnings.

According to Lewitt, it's impossible for the economy to grow when banks use negative interest rates. He says negative rates are nothing more than a means of destroying capital.

"After years of fiscal and monetary policies that failed to create sustainable economic growth, investors should take whatever profits they earned from central bank profligacy and prepare for a much tougher period ahead," Lewitt said back in May.

Statements and support from central banks is what keeps pushing the stock market higher. But Money Morning Technical Trading Specialist D.R. Barton said the Federal Reserve is coming out with fewer and fewer good economic data to keep the momentum going.

He thinks markets will move a couple of percentage points higher, but that's probably all they can muster.

"Before we go much higher, and given all the 'wandering' we've endured, the next downward elevator the market catches will deliver a ride as deep and violent as the post-Brexit vote plunge we saw in late June," Barton said on Aug. 9.

Money Morning Capital Wave Strategist Shah Gilani says stocks are being "pumped up on the tune being played by central banks." When that artificial rally happens, it's only a matter of time before it all comes crashing down.

In other words, it's not a question of if a 2016 stock market crash will happen. It's a matter of when it will – and Gilani warns we're getting close to the "when" point.

Up Next: Make Money During Any Market Crash with Just One Number