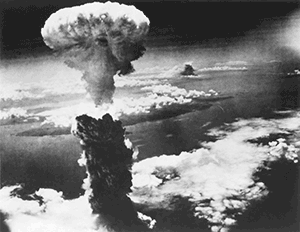 A mushroom cloud caused by the nuclear bomb dropped on Nagasaki, Japan, Aug. 9, 1945.

The UK's new Prime Minister Theresa May shocked the world on July 29 when she abruptly ordered a last-minute halt to the $26 billion Hinkley Point nuclear power plant's construction.

The plant, located in Somerset, England, was heralded as the biggest construction site in all of Europe, according to BBC on July 26. It would have the capacity to deliver 7% of the UK's electricity.

Furthermore, the huge project was expected to provide Brits with 25,000 more jobs and a subsequent economic stimulus.

But May said she has concerns about national security – most notably involving Beijing and recent news of China's nuclear espionage plot, which was revealed in April by the U.S. Department of Justice (DOJ)…

Don't Miss: China is actually killing the U.S. on trade. Here's a look at the massive imbalance…

Ho was arrested on April 14 on suspicion of providing China with U.S. nuclear secrets as far back as 1997.

He also just happened to be a senior adviser for CGNPC at the time, a Chinese government-backed nuclear power agency that has a 33% stake in Hinkley Point's production.

So, in spite of the Sino-UK deal struck in October 2015 to build the power plant and give Beijing a stronger foothold on Western development, Prime Minister May intervened.

At least until more information is known about the Chinese nuclear espionage plot that actually started on U.S. soil…

China's Nuclear Espionage Plans Were Carried Out by One Man

Here in the States, Allen Ho stands accused of enticing American nuclear experts to pass sensitive information on to Beijing by paying them bribes.

His access to such experts came via his position as a dual Chinese/American energy consultant for various public utilities firms in both the East and the West.

In short, this means Ho was charged with espionage because he provided China with U.S. nuclear secrets on foreign soil (from within the UK, in this case). If convicted, he faces a maximum life sentence and a $250,000 fine for this charge.

Had Ho given over the exact same material to Beijing but had done so from within the United States, he would be subject to a 10-year maximum prison sentence.

And the particular material in question refers to enriched uranium and plutonium for fuel in nuclear reactors.

But Ho's attorney claimed prosecutors are using "novel and untested legal theories" in order to charge his client because the statute has never been employed in its "prior half-century of existence," reported The Wall Street Journal on June 10.

Furthermore, Ho's lawyer argued, his client "has no expertise or experience in the development or production of 'special nuclear material'" — referring to the aforementioned enriched uranium and plutonium.

Charged alongside the 66-year-old energy consultant was the Chinese government-backed energy company, CGNPC.

A "guilty" verdict against the firm could have monumental global consequences, especially when it comes to trade…

According to the 17-page indictment brought forth by the DOJ, CGNPC also allegedly conspired to commit nuclear espionage. The company purportedly facilitated the travel of the U.S.-based experts to China and offered payments to them in exchange for their services.

Such accusations against CGNPC essentially make the entire Chinese regime liable, because the nation oversees its operations.

And this fact, in turn, makes the UK's hesitancy to continue with Hinkley Point's production a delicate issue.

Enough to warrant a warning from China's ambassador to Britain, Liu Xiaoming.

In an opinion piece for The Financial Times issued Aug. 9, Xiaoming claimed the cancellation of the plant could affect trade with Britain's second-largest trading partner outside Europe.

"The China-UK relationship is at a crucial historical juncture," Xiaoming warned.

The message was clear: Abandon Hinkley Point and you'll pay a steep price.

Up Next: Just a month after The Hague Tribunal invalidated China's vast territorial claims in the South China Sea, a new front line in that vast disputed area has started to emerge. Here's how the international row is spilling over into cyberspace…

What do you think about this recently exposed Chinese nuclear espionage plot? Should Hinkley Point continue being built? Tell us on Twitter @moneymorning or on Facebook.