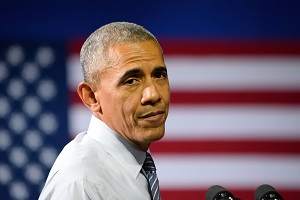 At a rally on June 1 in Elkhart, Indiana, President Barack Obama proclaimed that, finally, the economy was helping ordinary Americans.

"Wages are actually growing at a rate of about 3% so far this year," he declared. "That's the good news. Working Americans are finally getting a little bigger piece of the pie. But we've got to accelerate that."

The POTUS' 3% average wage growth has likewise been touted by several economically oriented outlets in recent months (The Financial Times and Forbes on May 5, Jared Bernstein's blog On the Economy on May 26, etc.). Among these outlets, the Federal Reserve Bank of Atlanta has emerged as the new go-to source for accurate wage growth data because it focuses on the continuously fully employed, who are likely to do a better job of gauging labor market strength.

Don't Miss: Your retirement investment advisor is about to become your fiduciary – whether you like it or not. Thanks, Obama…

But there's one big problem with the Atlanta Fed being the new favored source for wage growth:

You see, the Atlanta Fed still gets its numbers from the old wage growth source, the Bureau of Labor Statistics (BLS). (The more widely known monthly "jobs report" from the BLS contains the labor report, by the way.)

The problem with the BLS' labor report is it's constantly being revised, sometimes with massive changes (as is the jobs report).

In fact, every time a labor report is released, a benchmark revision date is given as well to alert the public that the numbers are subject to change.

For example, on June 7, the BLS released Q1 (January through March 2016) compensation numbers that came out to an astounding 4.2% increase. The institution had previously reported a 0.5% increase in the fourth quarter of 2015.

You may be thinking, "Well, that's great! Wage growth was much higher than anyone expected!"

That's exactly what economists thought, too. According to CFO.com on May 4, economists were expecting a somewhat-hawkish 3.3% average rise for Q1 at best, which would make more sense given the Atlanta Fed's findings.

However, the BLS revealed on Tuesday (Aug. 9) that its 4.2% wage growth figure was way off.

We'll have to just wait and see if the Atlanta Fed's wage growth tracker updates with that latest bit of information.

Because it wasn't just a small calculation error on the Bureau's part this time; it was massive — and the BLS tried to bury its revised findings as quickly and quietly as it could…

Deep in the trenches of the BLS' updated report, the Bureau admitted that Q1 wage growth figure had not been 4.2%, as it had previously claimed.

Compensation also fell another 1.4% in the second quarter of 2016, from April to June, the report read.

That's a near 2% drop in wages since December 2015 — making the term "wage growth" oxymoronic.

When the Atlanta Fed does update its tracker, it might want to fill President Obama in on these massive miscalculations as well.

Besides, even if wages were growing, the numbers would just provide further evidence that the United States is still stuck in a roller coaster of paltry percentage gains and falls anyway.

Of course, that's not what the mainstream media wants you to know…

How to Read the Government's Wage Growth Data

Always with a grain of salt…

Money Morning's own Global Credit Strategist Michael Lewitt has long been skeptic of the optimistic sunglasses the mainstream media tries to put over the public's eyes with the jobs and labor reports.

"[The media] continue to downplay negative economic news and tout the least sign of economic growth as a boom," Lewitt recently told readers on Aug. 7.

"Ignoring seasonal adjustments, which apparently strain the intellects of so-called financial journalists who demonstrate an ignorance of both finance and journalism, CNBC treated the [July 2016] jobs report as a blockbuster, which it certainly was not," Lewitt explained. "Two hundred thousand jobs a month in an economy with over 300 million people is pathetic, particularly when only 150,000 of those jobs are coming from the private sector."

And not only does the mainstream media issue the jobs report with happy glasses on, but it does so with an irresponsibly narrow gaze as well.

For example, if you look at U.S. wage growth numbers from about 1985 onward, you'll notice that the numbers have been bobbing between 2% to 4%. 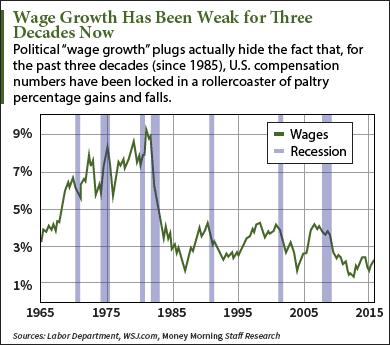 We're still in the era of wage stagnation.

So no matter what the politicians and the mainstream media might tout, until wage growth breaks that 4% annual threshold and keeps rising, their optimism is just wishful thinking.

Up Next: Investing is on the verge of changing forever — and for everyone involved, from JPMorgan on down to individual investors. Here's what you need to know before the shifting starts…