Well... no. According to the Financial Times, Fidelity Investments, the $2.2 trillion asset manager, up and walked out of a Dimon-led effort to codify some best practices for American boardrooms.

So it seems some of finance's heaviest hitters are divided on the subject of good governance.

And in it we have a clue as to just what it is that has these titans of finance so divided...

What's more, if these guidelines are widely adopted, investing will change, for everyone from JPMorgan on down to individual investors.

And most likely not at all for the better...

Here's What Has These Kingpins All Fired Up 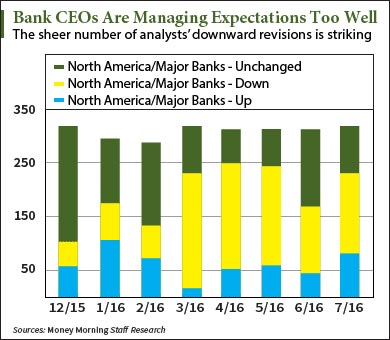 The most unnerving paragraph in "Commonsense Principles" isn't found in the guidelines themselves.

There are plenty of "universal" commonsense suggestions discussed in the paper, but as usual, several controversial aspects of the initiative are found in between the actual proposed guidelines.

Particularly this: "Our financial markets have become too obsessed with quarterly earnings forecasts. Companies should not feel obligated to provide earnings guidance - and should do so only if they believe that providing such guidance is beneficial to shareholders."
The group's positions on earnings guidance by management and quarterly earnings reporting are two volatile issues that need a more thorough airing - and not just on page B8 of The Wall Street Journal.

Because, when the white paper says, "Our financial markets have become too obsessed with quarterly earnings forecasts," it really means, "quarterly reporting should be done away with."

For the most part, the members of the panel think it's a good idea to follow the European Union's model and have public companies report earnings only twice a year.

Even the United Kingdom, which had required quarterly earnings filings, changed to the EU model in 2015, though companies are free to issue quarterly reports at their choosing.

For the most part the group feels excessive reliance on quarterly reporting drives short-term thinking on the part of investors, and just as importantly, on the part of managers who try to meet short-term earnings expectations to the detriment of focusing on long-term business planning.

How could that be a bad thing? These financiers want all investors to think long term, focus on the big picture, and invest for the future.

No. Just look again at who's doing the suggesting...

There's No Way These CEOs Deserve Any Slack

Coming from Jamie Dimon, backed as he is by the other big banks that agree quarterly filings are a regulatory burden and focus investors' attention on short horizons, questioning quarterly reporting requirements is a little frightening.

On second thought, Jamie Dimon leading the banks' charge for less transparency into their earnings is actually very frightening.

Especially given how important banks are to the economy; they can make or break it. Banks have a history of accounting irregularities, excessive leverage, derivatives, and trading-related exposure - to say nothing of outright criminal behavior.

None of these are "long-term" business issues... but they've contributed to banks' volatility for a long time.

Big banks, in particular, are prone to short-term market fluctuations impacting equities, fixed-income investments, currencies and commodities, and investment banking revenue, as well as up and down economic conditions, not because they have to produce quarterly earnings, but because that's what affects their earnings on an almost daily basis.

Well-known CLSA analyst Mike Mayo said of governance principles and reduced earnings reporting, "Enough banks have performed poorly for a long time," at the same time pointing out that the average bank stock is back to where it was two decades ago. He emphasized, "They should be on a short leash."

The other principle, the one that Jamie Dimon singled out, that "companies should not feel obligated to provide earnings guidance - and should do so only if they believe that providing such guidance is beneficial to shareholders," is equally problematic.

Earnings guidance isn't mandatory, though it is a preferred tool of corporate managers seeking to manage the share price of their stock.

Again, banks are a prime example.

There Are Different, Competing Agendas at Work

Prior to Citigroup Inc. (NYSE: C) releasing its second-quarter earnings, CEO Michael Corbat - in public forums where he was questioned about the bank's trading and investment banking revenue - talked down expectations on account of tough market conditions.

Not surprisingly, the analyst community knocked down their earnings forecasts, such that no one who knew better was surprised at all a few weeks later, when Citi's Q2 earnings came out and beat consensus earnings estimates by 12%.

What I call a "well-managed beat" ended up being one of many for big banks, almost all of which beat consensus estimates.

The managed earnings game, where analysts estimates are mostly "walked down" prior to earnings releases, is becoming more - not less - prevalent.

After the "Commonsense Principles" were released, Warren Buffett said on CNBC, "Guidance can lead to a lot of malpractice. It doesn't have to, but I think if the CEO goes out and says, 'We're going to earn $1.06 next quarter,' I think that if they're going to come in at $1.04, there's a lot of attempts to find a couple extra pennies some places."

Now, if the definition of "good governance" means corporations shouldn't try to manipulate how investors react to earnings (which is to say, bid up share prices) when they beat walked-down consensus estimates, then Jamie Dimon and crew have that one right.

There really is no reason management should interfere with analysts' estimates. Perhaps if they provided steady-state information to the analyst community and didn't juggle non-GAAP accounting practices, analysts' models would be better, and companies could be better judged on how they perform relative to effectively monitored and measured baselines.

There's just no consensus on what "commonsense principles" are.

For example, some investment professionals (like myself) advocate for standardized GAAP quarterly earnings reporting. That's no regulatory burden, because these companies are collecting that data on a daily basis, anyway.

On the other hand, for motives we can really only hope are genuine, critics of quarterly earnings reporting, notably, Democratic presidential nominee Hillary Clinton, insist that, "American business needs to break free from the tyranny of today's earnings report so they can do what they do best: innovate, invest, and build tomorrow's prosperity."

But for the sake of fairness, I think for now it's best that we shine as bright and harsh a light as possible on the inner workings of the country's biggest banks. As the history of their activities shows, to play it any other way would be inviting trouble - big trouble - for every investor, not to mention the wider economy.

In June I told you Britain would exit the EU, bringing global markets to their knees (what a profitable ride that was). Now "Part II" begins - as the "Brexit" frenzy spreads to France (Frexit), Denmark (Dexit), even Texas (Texit)... and investors can make massive gains with a simple trade technique. Here's the deal...

Quarterly reports and all the rest are reports to owners and would-be owners of stock and debt instruments in a company. I know of no one that buys into even a hot dog stand without looking at the books. What one chooses to do with the information is the individual's responsibility. Robotic computer trading is the problem here. The computer reacts to numbers. Some individuals see a failing company as an opportunity, some see it as a disaster. That's human nature. Nobody has figured how to program into a computer. Artificial Intelligence or not.

It's time for the government to step in and clamp down on the crazy casino otherwise known as Wall Street. The financial sector in the US is out of control and it should be cut down to size. Requiring corporations to report earnings every six months seems like a good idea. Perfectly reasonable. But Wall Street insiders seem to be discombobulating about it.