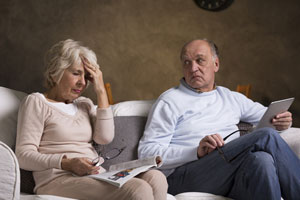 The 2008 stock market crash wiped out $10.2 trillion in Americans' wealth in one year alone. But the damage went beyond money, as many Americans lost their jobs, homes, and retirement savings.

Those days may seem far behind us today. The Dow Jones Industrial Average, Nasdaq, and S&P 500 are at all-time highs. And the U.S. Labor Department announced on Aug. 1 that 255,000 jobs were created in July. That crushed expectations of 180,000.

But just like in 2008, there are stock market crash triggers the mainstream media and U.S. Federal Reserve are choosing to ignore.

We don't want Money Morning readers to be taken by surprise, again.

That's why today, we're sharing three must-know investment strategies ahead of a potential stock market crash. Not only will these protect your money, they'll help you profit, too.

But first, Money Morning wanted to make sure our readers knew the two biggest triggers for a 2016 stock market crash.

In theory, negative interest rates are supposed to encourage spending. Banks are charged to deposit money with a central bank. To avoid the charges, banks are encouraged to loan out more money. The more money that is loaned, the more that will be spent, and an economy can grow.

This policy only works if people actually spend more money. According to The Wall Street Journal, residents in Denmark, Switzerland, and Sweden (all countries with negative rates) are saving the most money since 1995.

This will eventually cause some of the biggest economies that use NIRP, like Japan and Germany, to stop growing. And because negative rates are such extreme policies to begin with, there is little else policymakers can do to stimulate an economy if a NIRP fails.

The second trigger is the Fed running out of positive economic data to share to prop up the markets.

Here's some of the negative data the Fed is choosing to ignore:

When the Fed is forced to admit the economy is weak, the markets will plummet.

"Before we go much higher, and given all the 'wandering' we've endured, the next downward elevator the market catches will deliver a ride as deep and violent as the post-Brexit vote plunge we saw in late June," Money Moring Technical Trading Specialist D.R. Barton said on Aug. 9.

It's no longer a question of if a stock market crash will happen – it's when. But with these three investment strategies, you can still make money when others panic…

One of the worst mistakes an investor can make during volatile times is panicking and leaving the markets.

When there is a good investment opportunity, you should make it. Over time, long-term gains from strong companies will outweigh short-term sell-offs.

"Let's say you have $100,000 in the market and in normal times limit any position to 5% of your capital," Money Morning Director of Tech & Venture Capital Michael A. Robinson said. "If your risk worries are rising, you might cut that position-sizing figure in half to 2.5%, or $2,500."

By reducing your stake, you won't miss the potential upside when the market inevitably recovers.

Take Facebook Inc. (Nasdaq: FB), for instance. It wasn't a company that was dragged down by the markets in 2016.

As long as it's a good company, you should not be afraid to invest in it. You don't have to completely pull out of the markets, just use less money than you normally do to invest. That limits your down 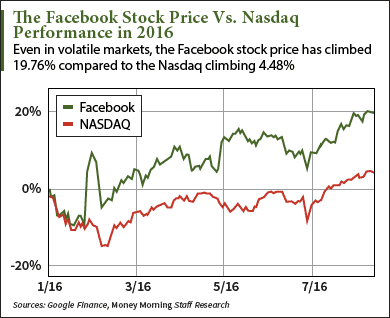 Editor's Note: Find out more about the billion-dollar trend that will send FB stock to $250 per share.

And the Brexit shows exactly why investors shouldn't panic. After massive sell-offs, the Dow quickly climbed within a week back to the levels it was trading at before Brexit.

"If you want to reduce your exposure, that's fine, but don't cash out altogether," Robinson said.

You see, nearly 70% of investors in 2015 lost money, according to CNN. Part of that is because retail investors try to time the market.

And when investors time the market, two things happen:

Instead of panicking and removing all your money, keep some of it in the markets to make sure you get the profits when stocks rebound.

"When you are up 100% on a stock, sell half," Robinson said. "That way you recoup your entire investment and are 'playing on the house's money,' as we like to say. "

Of course, you don't have to sell exactly half of your shares when you're up 100%.

The amount you do sell all depends on your risk level and overall investment strategy.

But whatever your comfort level is, this strategy allows you to cash in your profits and use "house money" to keep profiting.

Finding the best stocks to provide these types of gains, though, is difficult. But Robinson has one that is already up 11.7% since he recommended it in April.

To protect your portfolio from losses, Robinson recommends setting a stop-loss of no more than 20%. That way if a stock price collapses in a day, your money is pulled out before it can fall any further than 20%.

If you're trying to protect your gains, set a "trailing stop." It's hard to know when a stock price has peaked, and many investors lose money because they don't cash in their gains.

When you set a "trailing stop," though, you will always make a profit when a stock price climbs.

The Bottom Line: Dangerous policies like negative interest rates and the Fed running out of positive economic data for the U.S. are two triggers for a stock market crash. But with Michael Robinson's stock market crash investment strategies, you can still make money even when the markets are volatile. The three strategies are: make smaller investments, invest with the "house's money," and stay in the markets.