With the U.S. corporate tax rate at 35% - the highest in the world - hundreds of U.S. companies have piled up billions of foreign-earned profits in overseas tax havens.

As long as they don't bring the money home, they can avoid paying Uncle Sam.

According to a study last year by the Citizens for Tax Justice, nearly three out of four companies in the Fortune 500, or at least 358 companies, use tax havens. As of 2015, these companies were holding about $2.2 trillion in offshore accounts. 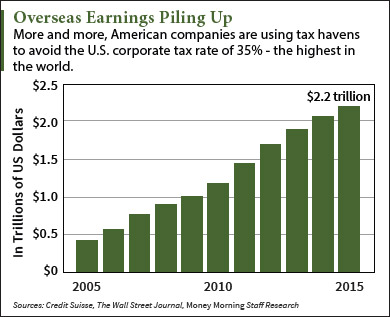 The Citizens for Tax Justice report estimated that if that money were to be brought home to the United States, it would generate more than $620 billion in tax revenue. That's more than enough to cover every bit of the $600 billion the U.S. Department of Defense spent in fiscal year 2015.

And while the use of tax havens is common among multinational corporations, the bulk of the money held in them belongs to just 30 companies.

Take a look at this chart from cost information website Howmuch.net: 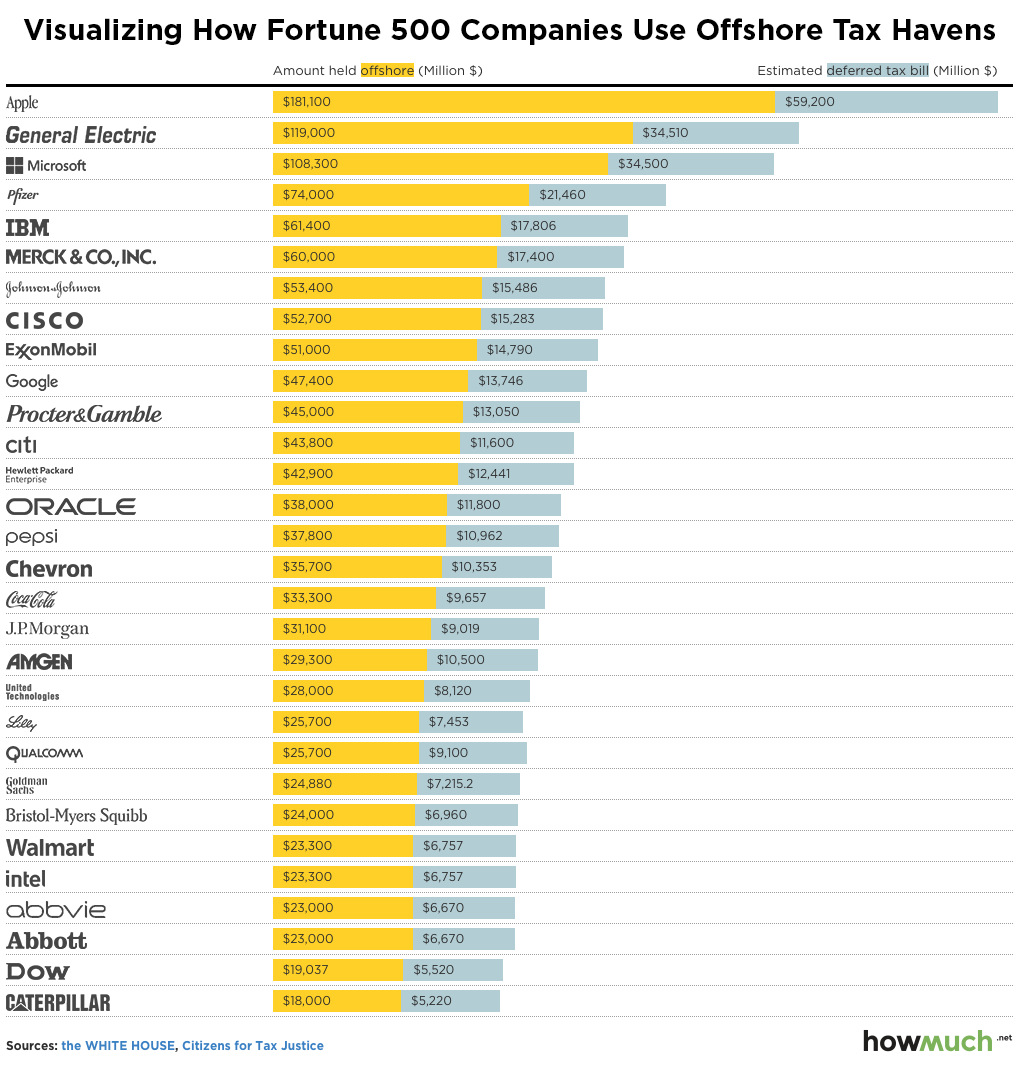 You'll recognize a lot of the names here, starting with the company at the top - Apple Inc. (Nasdaq: AAPL). Apple's $181.1 billion in foreign-held cash would result in a $59.2 billion tax bill if all of it were brought home.

These days Apple generates about 63% of its profits from overseas operations. To avoid that nasty tax bill, the tech giant funnels most of those foreign earnings to its Ireland-based subsidiaries, where they can sit untaxed indefinitely.

Ireland is one of the world's favorite tax havens because of its low 12.5% corporate tax rate and laws that make it easy to pay even less.

Nobel Prize-winning economist Joseph Stiglitz recently characterized Apple's arrangement, and those of other tax haven aristocrats, as a "fraud" in an appearance last month on Bloomberg TV.

In a recent Washington Post interview, Cook defended the use of tax havens. But he also made a suggestion that would do away with them...

Let's be clear: What Apple and the other multinational corporations do is what they're allowed to do - which Cook pointed out.

"The tax law right now says we can keep that in Ireland or we can bring it back. And when we bring it back, we will pay 35% federal tax and then a weighted average across the states that we're in, which is about 5%, so think of it as 40%. We've said at 40%, we're not going to bring it back until there's a fair rate," Cook told The Washington Post. "It is legal to do. It is the current tax law."

In fact, CEOs like Cook have a fiduciary obligation to avoid taxes by any legal means at their disposal. To do otherwise would be a breach of their responsibilities to shareholders.

While politicians like to lay the blame for the widespread use of tax havens on America's CEOs, the lawmakers themselves are the real culprit.

Don't Miss: The main problem with our do-nothing Congress isn't what you think. Here's the shocking truth about what lawmakers really do all day...

"Everybody's screaming and yelling about companies like Apple doing this, but the reality is that they're doing exactly what Congress put in place - the Foreign Direct Investment Act, tax incentives. There's hundreds of billions of dollars incentivizing companies like Apple to keep their money over there," said Money Morning Chief Investment Strategist Keith Fitz-Gerald in an appearance on FOX Business program "Varney & Co." on Monday.

Instead of attacking U.S. companies, the lawmakers in Washington should try doing their jobs and get to work on serious corporate tax reform.

Cook helpfully made a few suggestions...

Cook told The Washington Post he thinks "it's in the best interest of the U.S. to have corporate tax reform" even though it would result in Apple paying more taxes.

Cook said he'd prefer to bring Apple's foreign profits back home, provided Washington creates a fair system. And if that happens, Apple wouldn't be the only company to do so. Surprisingly, Cook is hopeful such changes are on the horizon.

"There's a difference of view with different people about how to fix it, but I think everybody agrees the current system isn't working. So I'm optimistic that, in 2017, there will be some sort of corporate tax reform," Cook said, suggesting the proceeds be used to invest in the nation's crumbling infrastructure.

This much is for sure: America is long past due for an overhaul of its corporate tax system. Tax havens are just one symptom of a bigger problem. For example, a recent study by the Government Accountability Office found that two out of three U.S. corporations pay no federal income tax whatsoever...