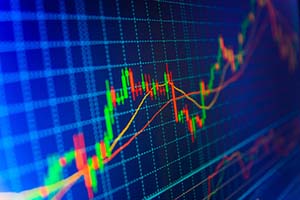 The report indicated that some policymakers believe a rate hike may be needed soon. Overall, the policymakers seemed content with the U.S. economic outlook and the ongoing improvements in the domestic labor market. They seem ready, however, to exercise caution in the event that the labor market or inflation cool.

With most analysts overly focused on the timing of the next interest rate hike, investors may have missed a number of different profit opportunities that emerged in today's afternoon trading session.

Before we get to the breakout possibilities, check out the results for the Dow Jones Industrial Average, S&P 500, and Nasdaq:

The Dow Jones Industrial Average added 15 points despite weak earnings reports and outlooks from retailers Target Corp. (NYSE: TGT) and Lowe's Companies Inc. (NYSE: LOW). Shares of both companies were off more than 6.5% on the day.

Meanwhile it was a busy day on the earnings front. Shares of Urban Outfitters Inc. (Nasdaq: URBN) rallied more than 18% after the retailer beat Wall Street earnings and revenue. The firm reported an adjusted EPS of $0.66, besting expectations of $0.55. The firm also easily beat revenue forecasts of $885.6 million.

Crude oil prices were ticking higher on Wednesday as traders weighed rumors about production levels of the world's largest producers. New reports from Saudi Arabia indicate that the country could boost crude production to record levels in August. The nation could soon overtake Russia as the world's largest oil producer. With concerns about a global glut swelling, OPEC members are expected to debate a production freeze to support crude prices.

Money Morning Global Energy Strategist Dr. Kent Moors has told energy traders to not expect a production freeze due to Saudi Arabia's standing as the cartel's largest producer. As Moors explained last week, Saudi Arabia has burned too many bridges with its own cartel members to get a deal done. Here is Kent's full prediction for OPEC's September meeting.

The big news today was again in the health insurance industry. This week, Aetna Inc. (NYSE: AET) announced that it will exit Obamacare exchanges in 11 of 15 states, citing rising costs and the company's inability to run a profit through the public-private system for health insurance. But a report by the Huffington Post today indicates that there is another reason why Aetna decided to exit the healthcare exchanges. A letter obtained by the news outlet indicates that Aetna executives wrote a letter to the Department of Justice threatening this exit if the federal agency didn't approve its merger with Humana Inc. (NYSE: HUM). The DoJ has publicly opposed mergers between Aetna and Humana and another deal between Anthem Inc. (NYSE: ANTM) and Cigna Inc. (NYSE: CI). Shares of AET stock added 1% today.

Up Next: One of the best stocks to buy today is up an incredible 228% since we first recommended it, and that's just the start of this stock's long-term gains. In fact, we see this stock doubling again… Click here to read all about it.