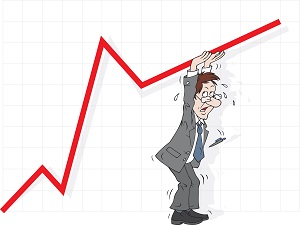 Not so fast. The U.S. economy actually lost 1.03 million jobs in July, according to the Bureau of Labor Statistics. That 255,000 number celebrated by the financial news media was actually the result of generous "seasonal adjustments."

It's not the first time the BLS has pulled something like this. In fact, seasonal adjustments are included in every jobs report, and there's a major problem with the way they are calculated.

We'll look at this problem in just a moment. But before we do, let's look at what seasonal adjustments actually are...

What Are the BLS' "Seasonal Adjustments"?

Before 1959, the BLS used to only include raw job additions in its monthly reports. But this method made the job market look pretty awful sometimes.

The raw reports didn't account for seasonal changes in unemployment, like going back to school in the summer, getting laid off after Christmas, weather patterns, or extended holidays.

The BLS now accounts for those cyclical layoff periods with so-called seasonal adjustments.

To understand how these adjustments are used, let's take a closer look at July's jobs report...

Looking at data from the BLS, we see that the total number of non-seasonally adjusted jobs we had in July were roughly 144 million. In June, we added 145 million. That's where we got the 1.03 million jobs lost in July. Keep in mind, this is the raw number -- it isn't seasonally adjusted.

The BLS conveniently labelled the 1.03 million jobs lost in July as part-time, or chalked them up to people leaving their summer gigs to go back to school -- so they simply did away with them altogether.

Compared to July 2015, this July's jobs report got an extra 5% boost in seasonal adjustments. If the BLS has used that same 1.22 million adjustment they used in July 2015, it would have shown 65,000 fewer new jobs last month.

And that's especially concerning, because evidence shows seasonal adjustments have a major flaw...

The Major Weakness with Seasonal Adjustments

Government statistic agencies like the BLS use seasonal adjustments indiscriminately.

And a federal probe found just that...

On July 29, after an extensive investigation by statisticians, the Bureau of Economic Analysis announced that its measures for seasonal fluctuations of GDP aren't fully successful.

The probe found evidence that residual seasonal adjustments carried over into the BEA's quarterly data for GDP. In other words, seasonal adjustments for one quarter of GDP might carry over to another. In response to the probe, the BEA said it will start publishing non-seasonally adjusted GDP estimates in 2018.

The BEA uses the same type of seasonal adjustments that the BLS does, only with GDP instead of employment. While a probe hasn't been launched into the BLS's statistical practices, one can only wonder what such an investigation would find...

Many have guessed why the BLS would make July's jobs report look better than it should.

"The gimmicked, headline payroll gain of 255,000 more realistically should have come in below zero, net of built-in upside biases," said John Williams, a seasoned economist and founder of shadowstats.com.

Some say it's to help Democratic nominee Hillary Clinton in November, since a bad economy would only benefit Republican nominee Donald Trump.

Others say it's to keep the stock market afloat. Indeed, the Dow Jones Industrial Average added 191 points and the S&P 500 added 18 points after the jobs report was posted. And the markets have since surged to all-time highs.

Besides monthly job additions, the BLS also has another sneaky statistic that isn't what it seems.

And it's just as fabricated as the number of jobs "added" each month...

This BLS Statistic Is Just as Misleading as Monthly Jobs Additions

The unemployment rate is one of the most disingenuous statistics being fed to Americans. It's included at the top of every monthly jobs report. The current unemployment rate for July was 4.9%. That means that nearly 95% of Americans have jobs or are retired, right?

The real "unemployment rate" for July is 23.0%, according to Williams. His unemployment rate (blue line below) accounts for the underemployed, discouraged workers, and the long-term unemployed. You can find a more detailed explanation about his methodology here.

It stands at 62.8%, which is about 4% lower on average than it was during the Great Recession. That means that nearly 40% of Americans don't have jobs or are retired.

"The hard truth is millions of American families are living paycheck to paycheck," said Money Morning Chief Investment Strategist Keith Fitz-Gerald on April 19. "The economic 'recovery' that the Fed and legions of economists are so proud of having engineered doesn't exist - and hasn't for a very long time."

The Bottom Line: Jobs reports are artificially inflated via seasonal adjustments. Unfortunately, they are one of the measures the Fed uses to judge economic activity. Doubly wrong -- not only are they inflated; they're also based on a manufacturing economy that we enjoyed more than 100 years ago.

"They simply don't reflect the services-based system we live in presently," Fitz-Gerald said.

Here's the real state of American prosperity -- and what you can do to ensure you're not left behind...

Up Next: The main problem with our do-nothing Congress isn't what you think. Here's the shocking truth about what lawmakers really do all day...