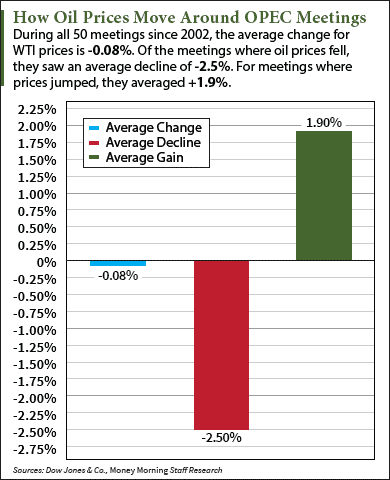 The crude oil price today (Thursday, Aug. 18) jumped to its highest level since July 1 on hopes the world's biggest oil producers will agree to cap output at next month's OPEC meeting.

Since the Doha meeting in April, every OPEC meeting has had a huge effect on oil prices. Since 2002, prices have averaged a 0.08% decline on the day of an OPEC meeting. On the days when prices fell, they fell by an average of 2.5%. Those losses are especially notable this year as every 2016 OPEC meeting has ended with no agreed change in output.

Don't Miss This: Famous investors like Buffett and Templeton got to where they are by beating Wall Street at its own game. Their victory made them wealthy – and you can do it, too…

Money Morning Global Energy Strategist Dr. Kent Moors believes the September OPEC meeting will also end without a change in output. Although the meeting will focus on its own members, it really revolves around one non-OPEC country with one of the most powerful positions in the energy market right now.

Before we get into this country's influence, here's more on the sharp rise in the crude oil price today…

Why the Oil Price Today Is Rallying from OPEC News

At 10:20 a.m., the West Texas Intermediate (WTI) crude oil price today was up 2% and trading at $47.74 a barrel. According to FactSet Research Systems Inc. (NYSE: FDS), that's the highest price for a front-end futures contract since July 1 nearly seven weeks ago. Futures for September delivery have gained 14.8% so far this month.

The Brent crude oil price today also moved higher this morning. The global benchmark – which is priced in London – jumped 1% to a seven-week high of $50.33 a barrel. Futures for October delivery are now up 18.5% in August.

The boost in the oil price today comes ahead of the OPEC meeting on Sept. 26-28, where investors hope the cartel will agree on an output cap. Despite oil prices rising for four straight sessions, officials from many OPEC countries have said they don't expect an agreement on output next month. On Monday, Aug. 15, Nigeria's oil minister said the 14-member cartel likely won't reach a deal next month.

For over a year now, many OPEC countries have teetered on the brink of collapse due to low oil prices. In Venezuela, oil exports make up roughly 95% of its export revenue and 25% of its GDP. The oil price crash contracted Venezuela's economy by 5% last year. As of June, it's expected to shrink another 8% by the end of 2016.

In other words, Venezuela needs oil at $180 a barrel to recover from its current financial meltdown and nationwide food shortage. Other countries like Nigeria, Algeria, and Libya require a minimum oil price of $120 to balance their budgets.

Editor's Note: We may not think about it, but our energy infrastructure is paramount to our way of life. And there's a $53 trillion problem with it that could send us back to the Stone Age…

As long as the Saudis have competition, they'll keep pumping at record levels. That will keep making smaller OPEC members poorer.

"Saudi Arabia and the rest of OPEC will never cap the oil it moves into the global market without having an assurance that producers not in the cartel would be doing the same," Moors said on Aug. 15.

Although the United States has grown into a dominant oil player, Russia has long been OPEC's primary opponent.

You see, the Saudis have tried to join forces with Russia's energy industry for years. That's because the Kingdom wants a piece of Russia's 256 billion barrels of oil reserves. In fact, Russia joining OPEC would boost the cartel's global market share by a whopping 33%.

But Russia and Saudi Arabia always clash because both refuse to be the first one to cut output. The conflict first came to prominence in November 2014. That was when Russia turned down Saudi Arabia's request to lower output. Since Russia decided to defend its share of the oil market, the Saudis and OPEC followed suit by keeping daily output steady at 30 million barrels.

"Russia has declared it will not agree to a cap, preferring to maximize exports in a barrel-by-barrel contest with OPEC," Moors said. "At the Doha meeting, Russians thought they would have an agreement for a cap only to find Saudi Arabia sabotaging the talks at the eleventh hour."

In other words, every OPEC meeting has been more futile than the last. Until there's a firm indication one party will lower output, neither will change their policy. That means the September OPEC meeting will likely end with no accord among members.

With that outcome in mind, Moors expects oil prices to remain range-bound through the end of 2016. This range-bound price environment means oil has bottomed and stabilized in the $40 range. Despite short-term drops, oil prices have nowhere to go but up as the IEA expects Q4 demand to hit 96.9 million barrels a day. That's up 2.3% from the 2015 annual average.

Next Up: This Ongoing War Is the Real Reason Behind Low Oil Prices

Alex McGuire covers the energy market for Money Morning. Follow him on Twitter for constant updates on oil prices and OPEC.