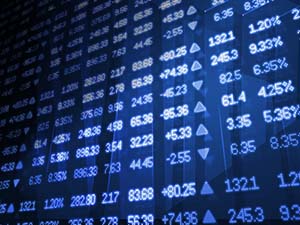 The Dow Jones Industrial Average today slipped more than 40 points as the schizophrenic messages from the Federal Reserve have traders now believing that an interest rate hike is certainly possible in the coming months.

On Thursday, San Francisco Federal Reserve Bank President John Williams showed his support for a rate hike during a speech. According to the CME FedWatch, the probability of an interest rate hike sits at 18% for September. The odds of a rate hike in December sit at 43%.

The FOMC meeting minutes – released on Wednesday – suggested an interest rate increase is possible as early as September. But with voting members decidedly divided, when will the next rate hike actually happen? We dive deeper into that topic, right here.

The Dow dropped 45 points, weighed down by energy stocks and utilities stocks. The energy sector was sliding after Brent crude oil hit an eight-week high. Shares of Chevron Corp. (NYSE: CVX) fell more than 1.1%, while shares of Exxon Mobil Corp. (NYSE: XOM) were off 1% on the day.

Crude oil prices were sliding from eight-week highs as investors continue to speculate on the possibility of a production freeze by global producers. Next month, members of OPEC will meet in Algeria to discuss the possibility of efforts to reduce oil output in order to boost prices. Despite ongoing optimism for a deal, Money Morning Global Energy Strategist Dr. Kent Moors argues that a deal is not imminent.

Money Morning is offering a stock warning for shareholders of shares of Twilio Inc. (NYSE: TWLO). The Twilio stock price is up nearly 300% over the last two months and could see an unexpected drop after Dec. 20, 2016. And we found one important reason why it could fall after that date.

Olympic men's swimming has ended. And unless Michael Phelps changes his mind again, Aug. 13 was the last time you'll see him compete. While Phelps was a big winner at his fifth and final Olympics, he also helped unleash big gains for three stocks. Tom Gentile offers his insight on the Olympics' three biggest winners and what investors should do next.