Editor's Note: Michael's presentation tonight at 8 p.m. is going to show you the huge profits to be had in "punishing" Wall Street for its greed and stupidity. But before tonight's main event, he wanted to show you exactly how lucrative this can be. His readers made 277% and 148% on the same day swatting Deutsche Bank on the nose, and he's looking at a similar setup on this American bank. Here's Michael…

Deutsche Bank (NYSE: DB) stock is barely off 30-year lows, and it spent a great deal of this late summer frantically unloading some of its multibillion-dollar derivatives book. It's too late for Deutsche Bank, but that hasn't stopped it from trying.

Another troubled Eurozone bank, Credit Suisse Group AG (NYSE ADR: CS), has been doing the same with its derivatives.

But if you thought these bad banks would have any trouble unloading their toxic "weapons of financial mass destruction," you'd be wrong.

In a breathtakingly stupid move, one American bank has been on a derivatives shopping spree, eagerly buying up these insanely risky instruments just as fast as Deutsche Bank and Credit Suisse can sell them.

Like a kind of Mayflower, full to bursting with toxic stupidity and risk, these ticking time bombs are heading across the Atlantic.

And that means there's another huge opportunity waiting for you…

What Citigroup Failed to Learn in 2008

Citigroup Inc. (NYSE: C) already nearly destroyed itself with derivatives during the 2008 crisis, requiring the biggest taxpayer bailout in history in order to stay afloat.

Strangely, it didn't learn its lesson the first time its stock fell below $1.

As rival banks see the writing on the wall and scramble to get rid of their derivatives, Citi is now cheerfully snapping up billions of dollars' worth.

Several weeks ago, Credit Suisse prudently sold $380 billion of derivatives to Citi, thereby reducing its own leverage exposure by $5 billion. Last year, Deutsche Bank palmed off $250 billion of credit default swaps on (guess who?) Citi, and is in talks to get rid of even more.

The result is that Citi now holds the most derivatives of any of its U.S. rivals. That's a staggering total exposure of nearly $56 trillion, according to the OCC's latest report, shown here: 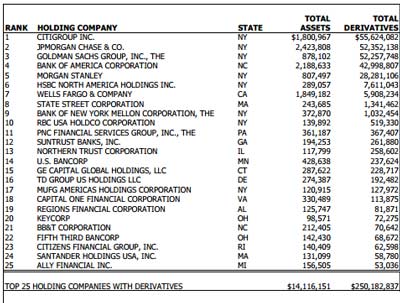 If only this were some sort of massive, momentary lapse of institutional sanity. Bizarrely, this is a strategy that Citi has been pursuing for some time.

Three years ago, the bank separated its derivatives and cash traders and created dedicated derivatives teams – including a "risk optimization" team led by Vikram Prasad, who explains, "You can't have every trader obsessing over every capital measure. By giving that responsibility to a dedicated team, we're using our resources in a more efficient way."

While acknowledging derivatives are so risky as to require a large stable of dedicated handlers, Citi continues amassing and championing them. "We consider single-name CDSs to be an integral part of our overall credit business," says Brian Archer, Citi's New York head of global credit trading. "A large number of our biggest clients still want to trade the product and use it to move risk. We have the appropriate resources in place to service that demand."

In other words, Citi is playing with dynamite – and it's proud of it.

Never, Ever Play with Derivatives Dynamite

There are numerous reasons why Citigroup's derivatives stockpile is likely to blow up in its face. I've detailed many of them in investor opportunity briefings, here and here.

In fact, our current $650 trillion derivatives market is a nightmare scenario waiting to happen.

First problem: the size. It's 36 times the size of the U.S. GDP and over eight times larger than the world GDP – the entire global output of the entire world in a year.

Second problem: the interconnectedness. Every derivative contract involves two parties that agree to make certain payments to each other. But if one party is unable or unwilling to live up to its agreement and make those payments, the other party is left holding the bag and nursing a big loss.

In a crisis, this can leave a volume of broken contracts that will overwhelm these institutions and render them instantly insolvent.

American International Group Inc. (NYSE: AIG) almost blew up because it wrote too many derivatives contracts on collateralized bond obligations that held billions of dollars of subprime mortgages. AIG couldn't meet its obligations, leaving thousands of counterparties around the world at risk of loss.

This is why the U.S. government had to step in and bail out AIG (and Citigroup, which seems to have forgotten this part of its history) – to save those other counterparties from massive losses that would have destroyed the financial system.

Derivatives are opaque, difficult‐to‐price instruments from which Wall Street earns large profits. Wall Street is not a public utility – it is a profit-seeking engine whose primary purpose is to generate money for itself.

The more complex and opaque the instrument, the easier it is for Wall Street to fool investors (even supposedly "smart money" investors like hedge funds and large institutions) and mark up these instruments to earn outsized profits from selling and trading them.

Wall Street's limitless greed and disregard for risk has created a complex monster that it simply doesn't understand. It can't control this monster for much longer.

Citigroup certainly won't be able to.

How to Profit When Citigroup Goes Bust

The global financial system remains grotesquely overleveraged and unprepared for another crisis. Banks like Deutsche Bank and Citigroup are at the epicenter of this weakness.

Members who are following along have already made 277% or more on my Deutsche Bank trade – and you still have a chance to profit. I think the embattled, derivative-ridden monster is headed down to $5, and you can get my latest put recommendations here.

When the next market dislocation arrives, as it inevitably will, these derivatives will again earn their reputation as "weapons of mass financial destruction." If counterparties are unwilling or unable to perform, all bets will be off.

The definition of insanity is doing the same thing over and over and expecting a different result. The first time Citigroup tangled with the derivatives monster during the 2008 crisis, its stock plunged to a low of $0.97.

In the grip of some bottomless stupidity I can't fathom, it's expecting a different result this time around.

So, in order to profit when (not if) this stock collapses, I recommend some long-dated puts.

Derivat Ives in general are fine untill you come to the CDS which is truly the 'tail that wags the dog'. As a regulator Iwould seek to limit the CDS market to the size of the underlying issue to make it a true 'credit protection/hedge' vehicle and not one of pure speculation that can be used as a weapon of mass destruction as was the case with Lehman.

I couldn't agree more. It's like you said, it's not if, but when this financial destruction will happen. The holding companies and banks, should have learned their lesson, from the 2008 disaster, but they have not.

If I didn't know 3+4=7, I shouldn't be in the market. Thanks, I believe Citibank is in for a hard lesson. I am buying 2018 Puts as suggested. I'm pretty certain they won't expire before I make a bundle on some Wall Street numbskulls.

Why wouldn't they keep doing this, it doesn't cost them a thing. When it goes belly up again, they will be bailed out with our children's futures and be able to keep their golden parachutes. Why hasn't anyone gone postal on these people? Hopefully soon.

Precisely… they DID learn their lesson & once AGAIN are applying it. Wallow in these markets, make alot of money, get outrageous bonuses, have it all blow up, stick the losses to their shareholders & the bailout to the taxpayers (including the next 3 generations), "retire" with huge severance packages, & never worry about going to jail despite perpetrating once AGAIN, one of the largest thefts in history.
Lesson learned, & being applied… AGAIN. puke, on them & THEIR next 3 gens

PS: like the "postal" idea…seems that is the only way to stop the injustice & get a little justice. Of course they WILL learn about karma, if not now, then on the other side. (Thank you, Universe)

If your commentary is correct what are the regulators doing to quell this potential nightmare?

Regulators … hahahahaha. That's a good one.

The "regulators" are busy watching YouTube while they wait for their job offers from … wait for it … the banks they pretend to "regulate."

The "Regulators are doing nothing as usual or it would not have gone this far. There are NO "Regulators", only titles. They have the money and the power and as someone else said they DID learn their lesson and they liked what they learned!

You mentioned to buy long dated Puts for Citibank,Could you please tell us How long?
Jay Bihari

In Holland we had a public discussion why Bankers had to be paid so much. "You need the top" it was said. Now we see what the 'top' has accomplised: citigroup once >500$ 8 Y later <$50 worth.
Deutsche Bank from $ 150 down to $12
I would rather see people with Down Syndrome in the board, they would do better. These greedy Ceo's are worse than criminals for the investors. We should short them in stead of the stocks.

Mr. Levitt, this morning I receive an email from you stating "When I turned on my TV this morning, I saw something out of a horror movie..
Thousands of rioters in Charlotte, North Carolina looting stores, vandalizing cars, and attacking people.
My blood began to boil…"
Well sir by all media accounts I read and saw there were hundreds of peaceful protesters in Charlotte, North Carolina last night. However I do agree with you in that "This misinformation is LITERALLY wreaking havoc on our country. Every single day."

Perhaps the W.F. scandal is also a scam? As in; W.F. could be first in banks to go? Perhaps? A sound reasoning scandal, for sure. Who could doubt that 24 million bogus accounts were created ( the greater the numbers, the more believable?) by employees, no less. And, naughty as these employees have been, and as organized as things may appear, what gives anyone a notion these are crafty and some how related accounts? Anyways? Heck NO! This is, plain and simple, a bank collapse. Disguise these happenings as you must. There apparently are more, and then more, and then,,,,,,heck, you get the picture.