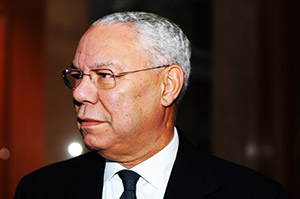 Last Thursday (Aug. 19), The New York Times reported that Democratic presidential nominee Hillary Clinton had told FBI investigators in early July that it was Powell who suggested she use her personal email account during her tenure as secretary of state.

Allegedly, he'd bestowed the former first lady with such advice at a dinner hosted by Madeleine Albright in 2009.

This has been Clinton's tactic during the entirety of the email debacle -- to argue that her predecessors engaged in similar practices.

However, one distinction between Powell's and Clinton's misuse of personal email accounts is this: During his time as secretary of state, Powell sent just two correspondences that were retroactively marked as classified.

Powell's office responded Thursday evening in a statement claiming that he had no recollection of the dinner conversation at Madeleine Albright's.

Then, on Saturday, Powell himself spoke out to set the record straight.

"The truth is she was using [her personal email] for a year before I sent her a memo telling her what I did [during my term as secretary of state]," Powell stated at an "Apollo in the Hamptons" event, according to a Page Six report released Sunday. "Her people have been trying to pin it on me."

When asked why Clinton's team was attempting to blame him, he responded, "Why do you think?" before adding, "It doesn't bother me. It's okay, I'm free."

Up Next: Deaths associated with the Clintons keep rising... On Aug. 1, Victor Thorn, a prolific writer and Clinton researcher, died at his home from an apparent suicide. Thorn's death is added to a list of over 40 other people who knew the Clintons intimately...

I knew that this American election would be unusually loud and different, because NEWS is what seems to operate the United States, or so the American information MEDIA seem to suggest. However, I am close to seeing it as a tragedy for the lives of many people innocent of anything deliberately criminal or of evil intent. Impugning General Powell is close to destruction of his credibly recognized Service to The USA, his country that he served in so many instances gallantly and with unquestionable distinction, including the Secretary-of State role of the former Clinton tenure and e-mail debacle. This one almost brought me to tears. The DNC corruption is tragic to put it mildly, as they try to plug the leaks in their foundering shipwreck of a government. I am sorry for the USA.

There's more to it regarding Powell and use of private email. For one, he used AOL, and his account was hacked, and emails released. By contrast, though the State Dept. servers were hacked, Clinton's was not.

The same was done among the top-most officials in the G. W. Bush administration.

But it's only ever a problem– a "scandal" — when the person does less than they is named "Clinton".

How about going after Trump for his promise to violate US an international law by engaging in torture — torture is the tool of tyrants — thus making the US as degenerate as the other dictators who engage in torture.

Or ask him if Russia has investments in him — and watch him squirm.