I hear frequently from folks who tell me they don't have the "time" to invest, which is why they're instinctively dismissive of anything that implies a longer-term perspective.

Look, I get the fact that many people may not have a long time to invest, and believe me when I tell you that I understand that you may not see the world the same way you did decades ago if you're soon to retire or already retired. I don't either.

I can help make you a millionaire if you understand the secret to the secret (of big profits).

Even if you have as little as 10 years.

Here's what most investors will never understand.

Can you predict the markets?

And that means they'd better be "in" if they want to bank the big bucks instead of standing on the sidelines deluding themselves into thinking they're better off. That way they'll catch the profits even if they don't see 'em coming.

Take the last century, for example.

The Dow Jones Industrial Average returned a staggering 17,202.56% from January 1900 to January 2000, and produced an annualized average return of 5.289% based on price appreciation alone. Throw in reinvested dividends and the numbers jump so high I'm almost hesitant to tell you that they're 1,903,871.13% and 103.56%, respectively, for the total DJIA return and annualized average return, according to the DQYDJ Dow Jones Industrial Average Return Calculator. That's enough to turn every $1 invested on Jan. 1, 1900, into $19,039 by Dec. 31, 1999.

Here's the thing, though.

Don't have a century?

That doesn't change the argument one iota.

Long term or short term, it makes no difference.

If you miss the best days consistently, you will never have the kind of wealth you want, let alone deserve. 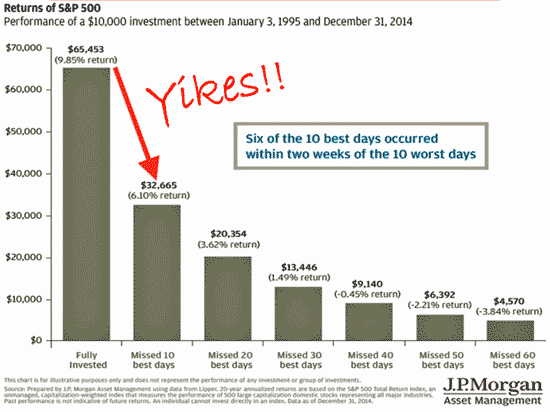 The other thing to bear in mind here is that you can't divorce the best days from the worst.

This is so important and so counter-intuitive that I want to say it one more time...

...the only way you can be certain to capture the huge short-term profits you crave is to be invested for the long term.

By doing the things we talk about all the time, starting with our Unstoppable Trends, prioritizing "must-have" companies over "nice-to-have" alternatives, and managing risk like a hawk.

And you start by understanding your history, for the simple reason that your history is what will give you the confidence needed to "trust" the numbers - despite the fact that they may instinctively go against every bone in your body.

Trending Now: This penny stock could double its current price - and also save a dying industry. Click here to learn more...

What I want you to come to terms with is that every single catastrophic financial event, every earnings contraction, every devastating bear market since the dawn of time has been followed by a raging bull market - most of which incidentally actually begin between three and six months before everybody realizes that they're over.

Ergo... any investor who waits for the "all clear" is almost guaranteed to miss the bulk of the recovery.

Ask anybody who sat out following Black Monday how it felt to watch the S&P 500 go on a 520% run that peaked in January 2000, or an investor who went to the sidelines in October 2002 only to miss the solid 82.3% run higher into 2007. And, not to be a pain in the you-know-what here, but there are plenty of people who ran for the hills again in 2008-2009 during the depths of the Financial Crisis and who have missed out on a generational 145% rally that continues even as I type.

I hope you're beginning to see my point, and the risks associated with doing nothing when history tells you that you should be doing something... like making your money grow.

Just in case, let me break it down...

History Shows the Biggest and Most Expensive Risk Is Sitting Out

1900-1910: The S&P 500 appreciated 113%, more than doubling investors' money, despite the turmoil of a president's assassination (President McKinley in 1901), an earthquake in San Francisco that left an estimated 225,000 to 300,000 people homeless, and the Russo-Japanese War that stunned the world by marking Japan's rise as a world power.

1910-1920: Markets declined 30%. Not quite so good, until you grade on a curve considering WWI and the Spanish flu were taking tens of millions of lives and rattling investors - not to mention testing the very fabric of civilization! Stocks like International Business Machines Corp. (NYSE: IBM) (founded in 1911), and General Motors Co. (NYSE: GM) (founded in 1908) set the stage for some of the biggest returns ever recorded.

1920-1930: Most investors are surprised to learn that this was actually the best decade yet, even with the stock market crash of 1929 that preceded the Great Depression. The S&P 500 more than tripled, returning 282% and transforming every $10,000 into $38,200. Not surprisingly, those very same returns built upon the "roaring 20s" when the S&P 500 surged 29% in 1922, 27% in 1924, 26% in 1925, and a jaw-dropping 48% in 1928. In retrospect, those astronomical gains were symptomatic of a bubble that would unleash historically unprecedented financial pain around the world when it popped, but that doesn't change the fact that investors who tripled their money in that decade would still come out ahead.

1930-1940: The Great Depression clearly weighed down returns leading up to WWII, which is why the markets posted their first negative return spanning a decade. Even so, those two very specific global impacts only managed to bring about a slight negative return: $1 invested in the S&P 500 dropped only to $0.90. And, thanks to the deflationary period that went with it, money was more valuable coming out of this decade than it was coming in.

1940-1950: Despite five and a half years of global war and the newly emergent threat of nuclear war set in 1949 when the Soviet Union tested its own nuclear weapons, the markets lost no time making up ground. In fact, they turned in an average annual gain of 5.43% that amounts to 79% gains over the decade.

1970-1980: The Iranian Revolution, soaring petroleum prices, and rampant inflation in the late 1970s didn't stop the S&P 500 from returning 133%, turning every $1 of investors' money into $2.33. However, the soaring inflation of the Carter years chipped away at these gains considerably, leaving investors up 2% after inflation.

1980-1990: Another amazing decade for markets, second only to 1950-1960. The S&P 500 returned 182%, almost quintupling investors' money. Years later, Soviet archives would show how 1983 was actually our closest brush to nuclear war yet, more serious even than the Cuban Missile Crisis.

1990-2000: Capitalism celebrated the fall of the USSR with a 254% rally in the S&P 500 over this 10-year period. Despite a weak start to the decade as the United States shook off recession, the tech boom in the latter half of the 1990s enabled the markets to multiply investors' money yet again.

Investors tell me all the time that things will be different this time. No, scratch that... they insist - and often vehemently at that, citing everything from monetary policy to the price of a green door in China as support for their thinking. Ultimately, they may be right. 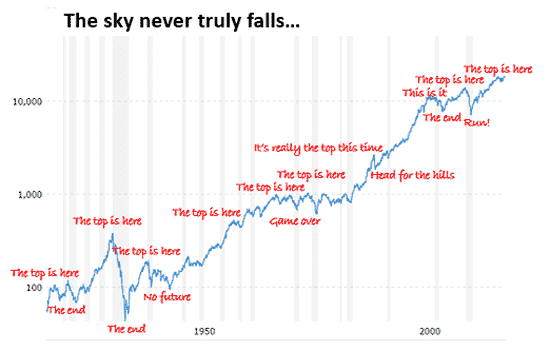 What does happen, though, is that growth continues.

It may slow, but it will never stop, which means that the only way you'll capture that is...

You may have to change up your tactics or adjust your perspective a bit, but that's another discussion for another column.

I'll be with you every step of the way.

Up Next: This Is the Ultimate Must-Have Investment