The markets have once again been flirting with new all-time highs, leading many investors to ask if they should be buying. And, once again, all the usual suspects are trying to convince investors to abandon ship:

...There's a crash around the corner

...Clinton this, Trump that

To paraphrase a famous line from the 1990s smash American NBC sitcom "Seinfeld"...

The markets are always making new highs. Putting more money to work is exactly what you should be doing.

You've just got to pick your bets a bit more carefully.

Many investors think that their luck is about to run out now that the markets have tapped new all-time highs.

First, history shows that the markets are almost always at or near all-time highs.

That's how they work and how you make money. There's a very powerful bias over time that parallels the huge amounts of money that's constantly chasing quality companies.

If that sounds like a loaded statement, you're right - it is. But I'm bringing it to your attention for a very specific reason - even the gut-wrenching lows of 2003 and early 2009 were all-time highs when compared to the very same markets in 1990 or in 1980.

It's your perspective that changes. 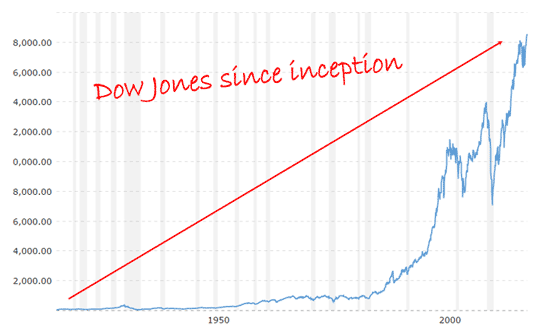 See what I mean?

Second, you don't want to fall behind by trying to time the markets.

Every dollar counts right now that the world's central bankers have embarked on yet another round of monetary madness and every day you're not in the markets is a day you'll have to make up... but somehow never will.

I've talked with tens of thousands of investors over the years and if there's one thing that trips them up, this is it. They fall prey to their emotions and try to time the markets based on whether they think the markets are high or low. 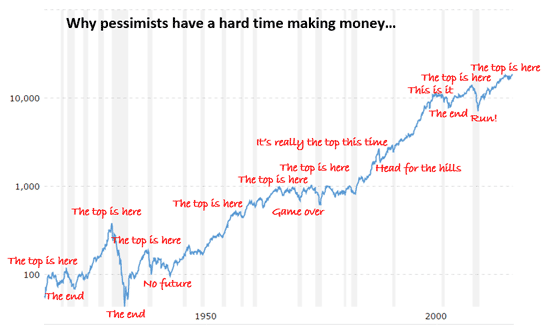 Most get it backwards because their emotions get the better of them and, not surprisingly, doom themselves to terrible returns.

From 1994 to 2014, for example, the average individual investor trying to guess the markets performed so poorly that they lagged every asset class except housing prices, three-month Treasuries, and commodities. 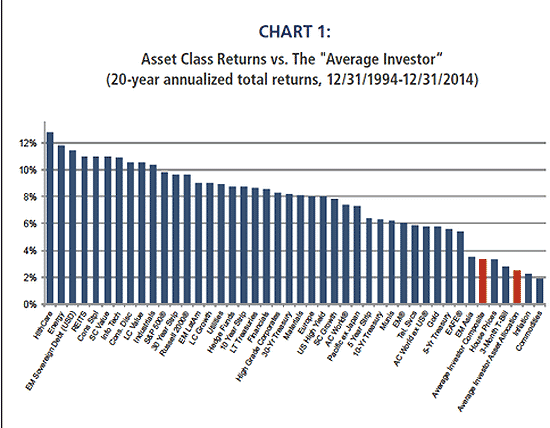 According to the latest DALBAR research, the average investor who tried to time the markets achieved annual returns of just 5.19% over the 20 years ending in 2015, while the S&P 500 tacked on an average 9.85% a year over the same time period.

And, third, capital is a growth engine, and what I mean by that is very, very specific.

Primary markets and the companies that drive them create value, and value, in turn, creates price. Not the other way around.

You can argue until you're blue in the face (as many do) that stock options, high-frequency traders, the Fed, stock options, derivatives, and more have removed that influence... but you still wouldn't put a dent in the underlying truth.

Prices ultimately reflect growth over time, which is why you want to invest, even at market peaks.

Market peaks typically reflect a narrowing of breadth, trading volume, and volatility. You'll know you're getting near one because price efficiency drops - meaning that it takes more effort to move higher.

Practically speaking, this is like climbing a mountain into thin air, in that it gets harder to breathe the higher you go. So, to avoid altitude sickness, you descend a bit before gathering the strength needed to make another ascent.

Chances are you've heard me allude to this on television in recent weeks in that you have to pick your bets a bit more carefully.

The easy money has been made, so indices are out.

Instead, you want to concentrate on the best companies using the Total Wealth Approach we talk about constantly:

One of my favorite choices at the moment is Huntington Ingalls industries Inc. (NYSE: HII).

I initially recommended it last November to High Velocity Profits members, and so far, it's returned 38.29% versus only 3.59% from the Dow in the same time frame.

That's a more than 10-to-1 "beat," and a cumulative advantage that gives every subscriber following along a huge advantage when it comes to building the kind of wealth most folks only dream about.

If you're not familiar with Huntington Ingalls, the company is a defense contractor best known for its services to the nuclear, oil, and gas markets, as well as for being this country's largest military shipbuilder.

The company has a $7.72 billion market cap and is trading at a very affordable 18 times earnings and a low beta of only 1.08, which means it's very stable under a wide variety of market conditions that scare the you-know-what out of most investors.

Huntington Ingalls also pays a 1.18% yield, which isn't the fattest yield you'll find right now. But HII has grown its payouts by 25% over the last year, and currently pays just 19% of profits back to shareholders, according to Dividend.com. That means this could be a very lucrative income play for patient investors as the company continues its dividend-growing hot streak.

Now, I could go on, but we've covered a lot of ground today.

So take a minute to digest the data I've shown you. You may have to come back to it two or three times to really internalize my message - that it's okay to invest at market peaks.

The best companies never go out of style and neither will the profits they put in your bank account over time. Toppish markets and all.

Despite pessimistic headlines and perpetual bears, there's always a profit opportunity if you know where to look... and have the right mindset to see it when it appears. It's actually quite simple to get started. In fact, Keith is offering his full report explaining the Five Principles he uses every day to uncover lucrative prospects. To receive the report, and more of Keith's insights in the future, sign up for Total Wealth here. It's completely free!

MEANINGLESS… unless you adjust your growth charts for inflation. Do you have any idea what a $1 would buy in 1950! Time is very valuable to most of us, so please write articles that are factual. Thanks!

Unfortunately, in your haste to chastise me you demonstrate your own lack of familiarity with the subject matter. Here's the inflation-adjusted chart you asked for and, as you can plainly see, there's still an upward bias. Further, the fact that $1 would buy a lot more in 1950 is precisely the point – short term swings do not obviate the upward pressure from constant amounts of capital chasing fewer quality stocks over time. 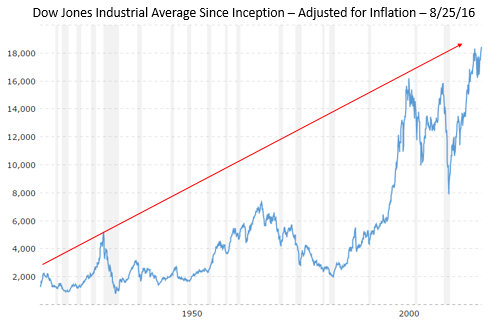 And, respectfully, just in case you don't want to take my word for it, here's a link to a chart you can create yourself based on "factual" data as you put it. – http://www.macrotrends.net/1319/dow-jones-100-year-historical-chart

Your charts are too small to read.