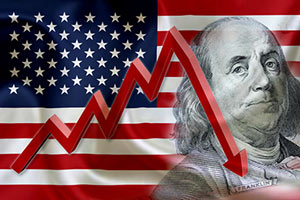 A U.S. stock market crash is imminent, despite the Fed's best attempts to convince you otherwise.

U.S. markets are at all-time highs, but they won't be able to sustain them much longer. The Fed keeps teasing another interest rate hike before the end of 2016, even though the economy is not healthy enough to raise rates.

And when things get ugly, many investors will be left unprepared.

That's why we're providing Money Morning readers with the best investment today that not only protects portfolios, but also profits during a U.S. stock market crash.

Before we get to the pick, here's a breakdown of what's really going on with the economy compared to what the Fed is trying to sell...

That's 41% higher than what was expected.

That sounds great, but here's the truth: The Bureau of Labor Statistics (BLS) has a crafty way of making job growth look better than it actually is.

Before 1959, the BLS included just raw job additions to its monthly reports.

Trending: This U.S. Bank Is About to Relive the 2008 Derivatives Nightmare

Because those numbers didn't always look great, the BLS created something called "seasonal adjustments." Seasonal adjustments include jobs that are lost due to students going back to school, people being laid off after holiday shopping seasons, and weather issues preventing people from working in industries like construction.

So when you look at the raw data, it's shocking to see what's really going on.

In June, the BSL reported non-seasonal adjusted jobs of 145 million. In July, it was just 144 million.

That means American workers lost over 1 million jobs from June to July.

So how was there job growth when over 1 million jobs were lost? The BLS conveniently used seasonal adjustments to make job growth look better than it was. So instead of a loss of 1 million jobs, crafty math makes it seem like 255,000 jobs were created.

These misleading numbers make retail investors think everything is fine, when the markets are actually in trouble. And that's how we get blindsided by a U.S. stock market crash.

Poor job growth isn't the only issue the U.S. economy is facing right now. Here are two other reasons a U.S. stock market crash is imminent...

Two Major Reasons a U.S. Stock Market Crash Is Near

"The hard truth is millions of American families are living paycheck to paycheck," Money Morning Chief Investment Strategist Keith Fitz-Gerald said on Aug. 19. "The economic 'recovery' that the Fed and legions of economists are so proud of having engineered doesn't exist - and hasn't for a very long time."

Fitz-Gerald also said that median household income is lower than it was in 2000, and incomes have grown by less than inflation in 28 states since 2007.

"Long story short: Many families are earning less than they did 16 years ago," Fitz-Gerald said. 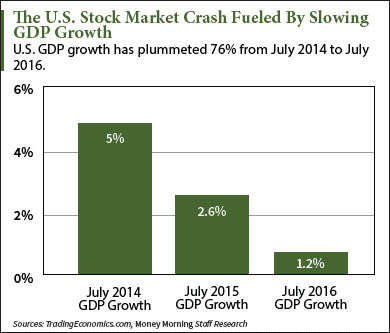 Finally, the Fed is also ignoring the fact that GDP growth has plummeted over the past three years.

GDP growth is important because it measures the health of an economy by either how much employees and businesses make (known as GDP (I)), or by total consumption, government spending, investments, and net exports.

The question isn't if the U.S. stock market will crash. It's when.

But you don't need to panic. By adding this one investment to your portfolio, you can still protect your portfolio and even profit during a U.S. stock market crash...

Before the U.S. Stock Market Crash, Buy This One Investment

But unlike complicated options trading, you can purchase SH just like a regular stock.

It's true that shares of SH are down 9% so far in 2016, compared to the S&P 500 climbing 7.3%. That's due to global indices trading at all-time highs over the last several weeks.

Warning: This looks like the setup for a bond bloodbath...

And during a U.S. stock market crash, you can expect even bigger gains...

To hedge their portfolios against losses and still make profits, some of the biggest wealth advisory groups and advisory firms for banks own SH. And as you can see below, 14 out of the top 15 institutional holders have all increased their positions in SH over the last six months. 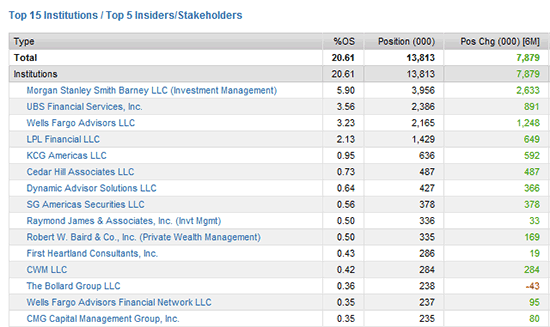 But because SH only goes up when the S&P 500 goes down, you only want to allocate a small portion of SH shares to your overall portfolio. SH does not offer a dividend, and it only climbs when the markets are volatile.

The Bottom Line: A U.S. stock market crash is imminent, despite the Fed's best efforts to make retail investors believe otherwise. Lost jobs, average weekly earnings for workers barely climbing, and GDP growth plummeting over the past three years show the true health of the economy. By purchasing shares of SH, you will profit every time the S&P 500 falls. If SH trades at its peak during the 2008 financial crash, you could profit by as much as 156%.

Up Next: A Default Spree Is Coming... and It's Going to Be Ugly