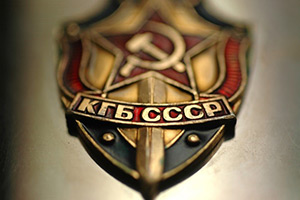 Americans have been obsessed with the idea of Russian espionage for decades -- arguably since the arrest of infamous husband and wife duo Julius and Ethel Rosenberg.

The pair were accused of passing nuclear secrets to the Soviet Union in 1950 and were ultimately convicted and executed at Sing Sing prison in New York on June 19, 1953.

Their trial and subsequent death sentences fueled the second "red scare" -- widespread American suspicion that Russian spies were ever-lurking. (Thanks, in large part, to Sen. John McCarthy, who'd convinced the public as much.)

It wasn't until the mid-90s, after the dissolution of the Soviet Union and the end of the Cold War, that "McCarthyism" died down.

But two decades later, U.S. government officials issued threats about Russia that could have fit right into Cold War times. And Uncle Sam's warnings snuck below the mainstream media's radar...

In 2007, U.S. counterintelligence agencies said Russian espionage was just as much a threat in the millennium as it ever was during the Cold War. That's because American society has become more and more "open" in the decades since - the government is more responsive, tolerant, and transparent towards its citizens today than ever before. We may think of Big Brother that way, but compared to Russia's opaque governmental standards, the United States is very open.

Thus making American citizens and institutions easier to spy on.

And in 2015, amid the hustle and bustle of one such unsuspecting institution -- Wall Street -- the U.S. Department of Justice (DOJ) would prove that warning true...

The feds nabbed three Russian "bankers" and charged them each with "conspiracy to act and acting as an unregistered agent of a foreign government."

In short, they were Russian spies.

And these particular spies had one ultimate goal in mind: to completely upend the U.S. stock market.

Evgeny Buryakov was a Russian native who came to America in 2009. Along with him came Igor Sporyshev, a Russian trade representative, and Victor Podobnyy, an attaché at the Russian mission to the United Nations. The latter two men were diplomats; Buryakov was not.

The trio secured jobs at various firms on Wall Street while working as undercover agents for the SVR - Russia's secret intelligence agency borne of the infamous KGB.

Around the time of their arrivals, U.S. counterintelligence agencies arrested 10 Russian "sleeper" agents on charges that they'd spent years spying on the United States for Russia. Each one had assumed false identities they used to connect with U.S. government officials and major think tanks. And each was caught actively trying to sneak intelligence briefs about U.S. policy back to Russia.

It was through this mass arrest that the FBI and the DOJ first learned of Buryakov & Co.'s plan to upend U.S. financial markets...

Naturally, the feds set about tapping and bugging the three men to decipher their plot.

It took three long years to piece together the entirety of the Russian spies' sinister scheme -- had they been successful, the U.S. as we know it wouldn't be what it is today...

In 2013, the feds listened in on a call between Buryakov and one of his diplomatic cohorts (the FBI never revealed which one) as they discussed what an unnamed Russian news organization should ask New York Stock Exchange employees "for intelligence gathering purpose."

ETFs in the United States were worth about $1.47 trillion in assets at the time (now they're worth $5 trillion, which goes to show that the spies were aware of their potential for growth... and their potential for market destabilization should asset values plummet).

Then Buryakov's line of inquiry took a suspicious turn. He allegedly wanted to know about "the mechanisms of use for destabilization of the markets," reported The Washington Post on Jan. 27, 2015.

"Mechanism... of... use... for... market... stabilization in modern conditions," his conversation partner repeated back to him on the line, presumably taking notes.

Buryakov corrected him. "For destabilization. Then you can ask them what they think about limiting the use of trading robots."

The mention of "trading robots" to destabilize the markets piqued the agents' interests...

You see, the United States had only recently become aware of how much damage such technological inventions could cause.

How Russia Could Induce a Stock Market Crash with Robots

Automated trading systems - or trading robots - are all over the market. Their specific duty, through the use of complex algorithms, is to buy and sell investments with lightning speed. These transactions are known as high-frequency trades (HFTs). They are completed not just in a matter of seconds -- but in a matter of milliseconds.

And when one of these trading robots malfunctions, it can be devastating... 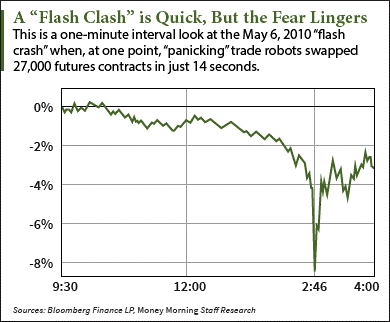 For example, on Aug. 1, 2013, a mid-sized corporation, Knight Capital Group (EPA: KCG), lost nearly $10 million per minute over the course of 45 minutes because of a robot malfunction. Total losses came to roughly $440 million in under an hour - all because one algorithm misfired.

But in the hands of Buryakov & Co., misfiring trading robots aren't just about monetary loss -- they become an issue of national security.

How One Man Took Down Wall Street with Robots

At 2:32 p.m. on May 6, 2010, an unnamed individual thought to be operating at the Chicago Mercantile Exchange (CME) executed a series of rapid heavy, bearish trades. Over the span of 19 minutes, the anonymous broker's trades amounted to 9% of the volume on the Standard & Poor's e-mini futures account -- the largest futures account tracking U.S. stock prices.

Board members from the CME would later testify to Congress in 2011 that, according to their own internal investigation, the trades had been part of a bona fide hedging strategy.

Boy, were they wrong.

You see, the faceless broker's actions caused prices to plummet in a cascade across the market that day.

And those falling prices prompted the trade robots to panic and start spitting out sell orders by the thousands... per second. At one point, HFTs traded more than 27,000 contracts in just 14 seconds.

The activity -- on top of the anonymous broker's massive trades -- completely overwhelmed the markets.

The Dow Jones Industrial Average suffered its biggest intraday point drop (from the opening) up to that point, plunging 998.5 points (about 9%) that day. The stocks of eight major companies in the S&P 500 fell to one cent per share for a short time, while individuals stocks, including Sotheby's (NYSE: BID) and Apple Inc. (Nasdaq: AAPL), soared briefly to over $100,000 per share.

A sum total of $1 trillion in market value disappeared that afternoon.

And while the markets recovered moments later, they still closed largely lower than where they had opened.

The panic had a lasting effect on investors, who took loads of money out of the U.S. stock market funds in the 17 months that followed -- to the tune of $137 billion, reported The Wall Street Journal on June 10, 2012.

It wasn't until five years after the flash crash, on April 22, 2015, that the world learned the anonymous broker responsible for the market mayhem was not a trader at the CME, but a British man named Navinder Singh Sarao.

Sarao was a simple day trader who used off-market computer software that he manipulated to make those heavy, bearish trades. And he did it all from the comfort of his own home.

All the Russian spies had to do was take a page from Sarao's playbook...

FBI Director: Russia and China Are the Biggest Threats to the U.S.

When Buryakov and his co-conspirators were arrested on Jan. 26, 2015, they were not considered by the DOJ and FBI to be "sleepers." In other words, they were evidence of a larger, comprehensive Russian espionage program at work on various levels. 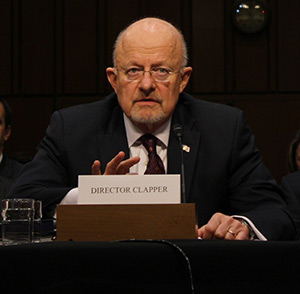 On Feb. 6 of this year, FBI Director James Clapper warned that Russia and China remain the greatest threats to America in seeking data on advanced weapons systems and information on U.S. firms and research institutions that deal with finance.

However, his cohorts in crime, Igor Sporyshev and Victor Podobnyy, being diplomats, were granted immunity and sent home.

No doubt they took a lot of useful information with them.

Next Up: Everyone's heard of the infamous Russian gulags responsible for keeping its inmates in a constant state of starvation and squalor. But they exist in America, too. And they're run by Uncle Sam...