With just months until the nation votes for a new president, let's look at the details in the Trump and Clinton economic policies.

There's no doubt that both of their plans would look quite different once put through Congress. But taken at face value, we can get an idea of the effects both Trump and Clinton's economic policies could have on your money.

How Trump's Economic Policies Will Affect Your Money

Donald Trump heavily sides with the long-time Republican position of lower taxes. The thinking is, the lower taxes are, the more money people will have to spend to spur economic growth.

And who doesn't love paying less money to the government, anyways? Lower taxes have always been a big selling point for Republicans, but that's always been tied with less government spending on social programs. That's not something everyone likes.

Trump's plan features lower taxes for everyone across the board, as he plans to reduce the income tax "dramatically." That entails simplifying the existing seven income brackets (ranging from 10% to 39.6%) into three brackets at 10%, 20%, and 25%. 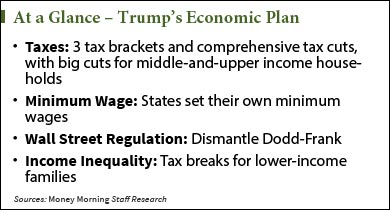 Trump's plan, as he correctly puts it, would be the biggest tax reform since Reagan's Tax Reform Act of 1986.

It's important to note that Trump's economic plan has undergone extensive revisions since he announced it back in December. That's why it may seem like it's lacking in specifics. According to his website, he's still hammering out some of its finer points and will release more specific details "soon."

How Clinton's Economic Policies Will Affect Your Money

Clinton's tax plan is standard fare for a Democratic candidate. She supports increased taxes – especially on the wealthy – to help pay for more social programs, like Medicare, Medicaid, and Social Security.

Clinton would largely maintain the current tax code. But her reforms would increase taxes marginally on the wealthy.

She would impose a 4% extra tax on incomes over $5 million and enforce a 30% minimum tax rate on incomes above $1 million. Conversely, Trump's plan calls for a 5% lower tax rate on the wealthy compared to Clinton's.

Clinton would also reduce itemized deduction benefits to 28% and increase the top estate tax by 45%. She would also cap the value of retirement accounts that are tax-deferred, like 401(k)s or IRAs.

Trump differs strongly with Clinton here. Remember, he wants to get rid of the estate tax altogether, and wants to leave retirement accounts alone. 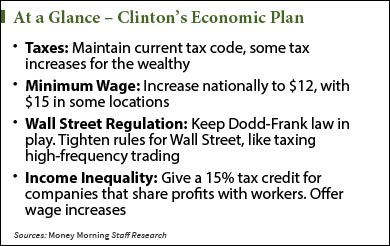 Under Clinton's plan, most Americans won't be affected by tax hikes, which target high-income individuals and families, according to the nonpartisan Tax Policy Center. Middle-income households (those that make between $30,000/year and $55,000/year) will pay about $44 more on average in taxes per year, while high earners (those that make $350,000 and up) will pay about $78,000 more on average.

Clinton's tax policy mostly favors middle-class and poor Americans, whereas Trump's favors all income brackets. But economists say Trump's plan would reduce federal revenue by at least $9.5 trillion over a decade, according to the Tax Policy Center. Clinton's, however, would increase federal revenue by up to $1.1 trillion within the first decade.

It's up to you to decide which candidate supports your personal income goals. In terms of investing, each candidate offers different ways to play the market.

And depending on your investment goals, one is better than the other…

He believes that a Trump or Clinton presidency each offer different opportunities for investors. And he knows how to profit from both.

Fitz-Gerald says that Trump can bring a refreshing end to establishment politics. Many Americans, especially populists, are sick of the status quo, according to Fitz-Gerald.

So they're going with the old adage, "the devil you don't know is better than the devil you do," Fitz-Gerald said on the FOX Business Network in May.

A shakeup in Washington could very well lead to a healthy boost in the markets.

"Anything can be better than the mess we're in now," Fitz-Gerald said. "I know a lot of business leaders that are excited about the possibility of a Trump (presidency)."

Trump would provide some new outlets for economic growth…

Trump wants to collapse the current eight corporate tax brackets (ranging from 15% to 35%) into a flat tax of 15%. The current U.S. tax rate is the third highest in the world. Reducing it would encourage new company startups and help grow corporate profits and investments. However, Trump also wants to tax the foreign income of U.S. companies abroad.

In the short term that would hurt multinational companies. But it would also provide an incentive for them to repatriate their offshore earnings onto U.S. soil. That's good for the U.S. economy. And anything good for the economy is good for investors.

"Longer term a Trump presidency will excite the markets," Fitz-Gerald said on the FOX Business Network in March. "He's a businessman and understands the art of the deal. Short term I think traders are going to have to decide how to hedge and unload their leverage."

In other words, Clinton is the "devil you do know." Investors will "know what they're getting," Fitz-Gerald says.

On the campaign trail, Clinton has been tough on Wall Street. But many have cited her close ties to Wall Street as proof she won't back up her hard statements with action.

Similar to Trump, Clinton wants to clamp down on foreign income of U.S. companies. Her economic plan calls for closed tax loopholes like inversions. Clinton also wants to charge an "exit tax" for companies leaving the United States. In theory, this would discourage companies from resettling abroad and work to create economic growth at home. While this could hurt corporate profits initially, a boost in GDP would help push the markets forward.

Another thing to note – Clinton is a staunch believer in climate change. She wants to reduce American oil consumption by a third through cleaner fuels and more energy-efficient vehicles. As president, she would cut billions of dollars in tax subsidies to oil and gas companies.

That would hurt big energy stocks like Exxon Mobil Corp. (NYSE: XOM) and Chevron Corp. (NYSE: CVX), at least in the short term.

On the flip side, Clinton wants to invest billions in new "clean energy," which would provide investors a whole new slew of investment opportunities, especially with future clean energy startups.

So regardless of who is elected, there will be plenty of opportunities for investors to make money.

The last time a politician targeted this industry, it doubled during the 2008 Financial Crisis.

A President Hillary Clinton would be this industry's next enemy. And that could mean windfall profit for investors that snag these investments early.