Those invested in equities in the 1980s and 1990s fondly remember U.S. stocks soaring year after year.

In the 15-and-a-half years since then, the S&P 500 is up just 50% – not bad, but nowhere near the blockbuster gains of the previous two decades. 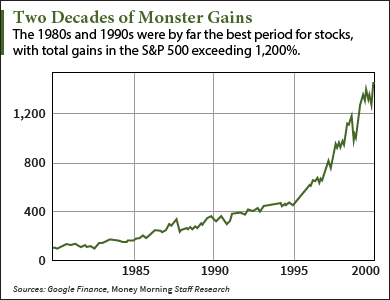 The main reason U.S. stocks soared to such heights then is due to a trend not often associated with investing.

Yet this trend is such a fundamental market force it also explains Japan's 20 years of economic stagnation.

And it's been the driving force behind China's explosive growth since the 1990s.

The Most Powerful Force Behind the 1980s Stock Market Surge

The trend I'm talking about is demographics.

This is exactly what we saw reflected in U.S. stocks through the 80s and 90s…

The window of opportunity for the United States opened in 1970 and closed in 2015, thanks to a demographic bump known as the baby boom.

Don't Miss: One Billion Reasons Why This Company Is Good for Another 100% Profit

From 1946 through 1964, the United States experienced a prolonged period of elevated birth rates. The result was a cohort of 77.3 million Americans. 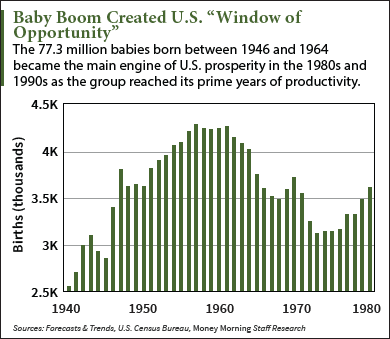 The size of the baby-boom generation gave it the power to open the U.S. window of opportunity. As the baby boomers matured and entered the workforce, their sheer numbers boosted U.S. productivity while their spending pumped up the economy.

By the 1980s, all the boomers were of working age. By the 1990s, most had entered their peak years of productivity and earnings. It's no wonder the stock markets soared.

One of the reasons the U.S. economic recovery of the past several years has been so weak is that the baby-boom turbocharger is sputtering to a stop.

In 2011, the leading edge of the baby-boom generation reached retirement age. Boomers will continue to retire at the rate of about 10,000 per day through 2031.

But while the U.S. window of opportunity has closed, others are opening.

Fitz-Gerald notes that because this phenomenon is based on known birth statistics, it's not only cyclical but completely predictable – a rare occurrence in the investing world.

"If you understand the science, you can accurately predict everything from economic conditions to market direction years – even decades – in advance," Fitz-Gerald said. "Most importantly, though, demographics are an investing 'edge' that can give you a way to interpret data that others simply don't see or understand."

With this edge, it's clear to see how massive amounts of capital will be flowing to these places in the coming years…

Where Windows of Opportunity Are Opening Now 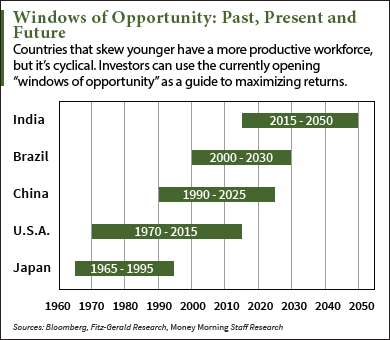 However, this doesn't mean U.S. investors need to buy foreign-based stocks they may not trust.

"Places like China, India, and Brazil face their own challenges," Fitz-Gerald said. "But I'm not saying you have to invest in them directly – I'm saying invest because of them."

Plenty of big U.S. multinational stocks will be tapping into these opening windows of opportunity, Fitz-Gerald said, as well as exploiting demographic changes here at home.

How to Profit from This Unstoppable Trend

In the medical field, Fitz-Gerald sees opportunity in the aging of the baby-boom generation. In particular, he likes device maker Becton, Dickinson & Co. (NYSE: BDX). For example, BDX makes more than 29 billion syringes each year, and each can be used just once.

"That's important from an investing standpoint because it means the company has built-in demand for its products," Fitz-Gerald said. "People have to have syringes to deliver the medicines they need… or they'll die."

He recommends investors place a lowball order at $150 to catch the stock on its next dip (BDX trades at about $174 now).

As the countries enjoying a window of opportunity grow and prosper, they invest more in defense, Fitz-Gerald said. They become very concerned about protecting their new status. Case in point: China's aggressive moves in the South China Sea.

"This major demographic shift needs major companies with the wherewithal to exploit it," Fitz-Gerald said. "Apple, Alphabet, and Facebook all have a billion users or more. They have the scope and scale to make use of this shift and profit from it."

Of course, armed with this knowledge, investors can also seek out other stocks likely to gain from these windows of opportunities.

"This is explosive growth in the truest sense of the word, and there will be king-sized opportunities along the way," Fitz-Gerald said.

Next Up: With the stock markets hovering around all-time highs, investors might be tempted to stay away for fear of "buying at the top." But even in a market making new highs, it's possible to harvest gains. You just need to pick your bets more carefully…