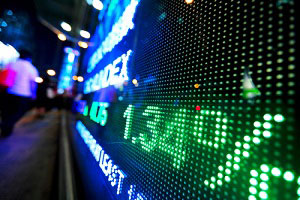 The Dow Jones Industrial Average slipped on Wednesday after a decline in materials stocks, crude oil prices, and healthcare stocks.

With earnings season coming to a close, investors continue to speculate on the timing of the next interest rate hike as Fed Chair Janet Yellen prepares to give a speech on monetary policy in Jackson Hole, Wyoming, on Friday.

While everyone is speculating on Yellen's comments, the real story is about a looming market crash. A U.S. stock market crash is imminent, despite the Fed's best attempts to convince you otherwise.

Oil prices have been falling on rising supply concerns and waning expectations about the size of any production freeze by OPEC. The global oil cartel is set to meet in September to discuss a possible cut to global output. However, Money Morning Global Energy Strategist Dr. Kent Moors has warned investors that it is unlikely that OPEC will reach a deal during a meeting in September.

In fact, Moors explains that the problems in the global oil market are only getting started for OPEC, just as the Second Arab Spring is underway.

But the big story today was the share drop in healthcare stocks. The 1% slump in the sector was fueled by a 5.6% decline in Mylan NV (Nasdaq: MYL). The company is facing political opposition to its recent price increase for the EpiPen allergy treatment.

Up Next: Today was the one-year anniversary of a Flash Crash. Last year, on this day, the Dow plunged more than 1,000 points. It was another reminder of how vulnerable the markets are at any time to a sharp downturn. Investors need to prepare themselves for anything, including a warning recently issued here at Money Morning. As we explained, a recent report from the Congressional Budget Office (CBO) indicates that a financial crisis is looming in the United States. Here's what you need to know.