In a Washington Post interview earlier this month presidential candidate Donald Trump said, "If the election is rigged, I would not be surprised, the voter ID situation has turned out to be a very unfair development. We may have people vote 10 times."

Whether or not you like The Donald, as New Yorkers call him, you can't fault him for saying the election could be rigged - because he's right.

In fact, it's even worse than he thinks.

Don't Miss: How to Thrive into Retirement... Despite the Fed

But there's a fix on the way - and it's one of the hugely disruptive technologies we've been following over the last few months.

Here's how easy it is to rig an election, how to fix voting to eliminate fraud, and how you can make money getting in on the fix... 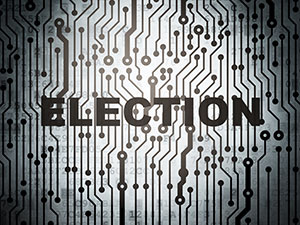 Donald Trump's contention that the 2016 election could be rigged on account of lax voter identification laws that allow voters into polling places without any identification - which means they theoretically could vote repeatedly in different locations - is actually small potatoes compared to systemic rigging that could happen on an unprecedented scale.

While most states replaced ancient punch card and lever machines with electronic touch-screens and fancy optical-scan voting machines by the end of 2006, those newly installed machines weren't properly vetted and ultimately created new and even more complex problems, including insecure software code and design flaws.

It's now 2016, so those initially problematic electronic touchscreen and optical-scan voting systems are over 10 years old, making them, technologically speaking, antiques.

Some states, like Massachusetts, Texas, Virginia, and Florida, are using machines that are at least 15 years old. There aren't even parts to fix their voting machines.

Larry Norden and Christopher Famighetti, authors of a Brennan Center for Justice report titled "America's Voting Machines at Risk," point out that "the majority of systems in use today are either perilously close to or past their expected lifespans."

The Brennan Center report puts it simply, saying, "No one expects a laptop to last for 10 years. How can we expect these machines, many of which were designed and engineered in the 1990s, to keep running?"

In fact, an unknown number of machines are running an embedded version of Windows XP, an operating system Microsoft stopped supporting on April 8, 2014. That means Microsoft won't produce patches for any new security holes found in the software. Almost all of the machines in California run on XP, and some even run on Windows 2000, according to the Brennan Center.

Not only that, but 43 states use systems that are no longer manufactured because the vendors went out of business.

Voting precincts around the country have reported calibration problems with electronic touchscreen voting machines that actually end up "flipping" votes - meaning, recording a vote for a different candidate than the one the voter selected onscreen.

Of course state auditors were brought in to investigate flipping incidents. Frighteningly, what they found was much worse. According to an investigative piece by NPR, "While using their smartphones, they were able to connect to the voting machines' wireless network, which is used to tally votes."

And, "Other state investigators easily guessed the system's passwords - in one case, it was 'abcde' - and were then able to change the vote counts remotely without detection."

So, it is entirely possible elections could, in fact, easily be rigged.

Thank goodness help is on the way...

Blockchain to the Rescue

Blockchain, the same technology that gave us Bitcoin and decentralized autonomous organizations, could be used to securely and transparently register everyone's vote.

Must See: How to Buy Bitcoins - The Money Morning Guide

A blockchain is a "distributed ledger." It "lives" on an open network that anyone running the software can join. Each and every member of the network is required to have an exact copy of every record on the blockchain, effectively replicating data over tens, hundreds of thousands, or millions of computers, eliminating the possibility of a single point of failure.

Instead of one person, one company, one party, even one government being in charge of a monolithic central database, everyone who sets up a "node" on an open blockchain network has a copy of the ledger being created. That means all voters, anyone looking at the blockchain ledger of votes, could verify each other's records in order to maintain the integrity of the ledger.

Once data is posted on the blockchain, it is there forever. It can't be deleted or changed by anyone.

Blockchain records are also timestamped and signed, so it is possible to prove the source of data as well as the date and time when the data was uploaded. Just like the data itself can't be deleted or changed, the timestamp cannot be spoofed either. And due to the decentralized nature of blockchains, everything is replicated tens of thousands of times over, distributed on computers all over the world, virtually guaranteeing against data loss.

Now that's how voting should be conducted, and it eventually will be.

They won't be in use for this upcoming presidential election, but there's a good chance blockchain voting will be how we vote in the not-too-distant future.

While there's no blockchain voting machine front-runner just yet, rest assured I'll be keeping a close eye on who's going to get government contracts when the technology's been fully vetted. So stay tuned.