Today, I'm going to tell you what she says before she says it. If you're reading this after the speech, you can gauge whether or not I was right.

This exercise, "guessing" what Yellen is going to say, before she speaks, is important.

Trending: How to Thrive into Retirement... Despite the Fed

It's important because if I'm right, you'll know I wasn't guessing, and you'll know exactly how the actors in Jackson Hole are burying us alive.

And you'll know what's going to happen with financial markets.

You Can't Fight the Fed's Future 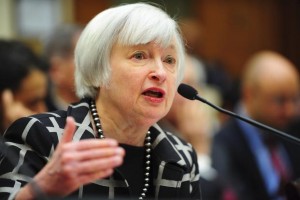 The title of the meeting this year in Jackson Hole, which is usually attended by the Federal Reserve chair, the world's central bankers, and economists, is "Designing Resilient Monetary Policy Frameworks for the Future."

The title of Janet Yellen's speech, according to the symposium's agenda, is "The Federal Reserve's Monetary Policy Toolkit."

So, first of all, I'll tell you the symposium is about covering central bankers' failed tracks and offering up a witch's brew of monetary concoctions that, if necessary, will be implemented in the future, just so the world knows these gods of monetary manipulation have our backs and will make everything alright, no matter what fears we have.

Excuse me while I laugh my head off.

Yellen's speech, and she's wearing the tallest, most pointed black hat at the barn-raising event, will be about how the Fed hasn't failed, how unemployment is better because of the Fed's policies, how the United States is leading the world out of global recession, and how, no matter how it looks, there are other tools the Fed can drill and thrill us with, just in case we're worried that what's not really been working stops working or implodes us.

All this is necessary because the Fed's credibility is in a ditch somewhere in Detroit.

On Aug. 25, The Wall Street Journal's Jon Hilsenrath penned a fantastic piece titled "The Great Unraveling: Years of Fed Missteps Fueled Disillusion with Economy and Washington." The subtitle was: "Once-revered central bank failed to foresee the crisis and has struggled in its aftermath, fostering the rise of populism and distrust of institutions."

Hilsenrath cites how steeply confidence in the Fed has fallen, saying,

An April Gallup poll found 38% of Americans had a great deal or fair amount of confidence in Ms. Yellen, while 35% had little or none. In the early 2000s, confidence in Chairman Alan Greenspan often exceeded 70%.

Back when the cryptic Alan Greenspan spoke in tongues when he spoke at all, most Americans, and a good part of the world, thought he was some kind of monetary god. The economy was humming along and his mostly low-interest-rate policies seemed to be doing the trick. Of course, in hindsight, we know the original modern central bank cranks set us up for the financial crisis and Great Recession.

So much for black magic.

Don't Miss: How Near-Zero Interest Rates Are Killing the Economy

One reason the Fed gets it so wrong, so often, is their economic "models" are like trash trucks - garbage in, garbage out. They're consistently wrong in their predictions and prognostications. Still, people believe they have some black box that predicts economic futures. They don't, and they've proved that for decades.

According to Hilsenrath's article (which is impossible to argue with), the Fed:

...missed signs that a more complex financial system had become vulnerable to financial bubbles, and bubbles had become a growing threat in a low-interest-rate world; were blinded to a long-running slowdown in the growth of worker productivity, or output per hour of labor, which has limited how fast the economy could grow since 2004; and had no idea inflation wouldn't respond "to the ups and downs of the job market in the way the Fed expected.

So with all that in mind, and knowing the symposium is about "Monetary Policy Frameworks for the Future," and that Chair Yellen is going to talk up her toolkit, here's what she's going to say:

Here's what she really means, and what she's not saying:

Sure, the markets are flat, waiting with baited breath to whatever the witchy woman says.

There'll be some reaction.

If Yellen is perceived to be dovish, meaning she's leaning towards more easing, more stimulus, if necessary, markets will rally for a while. Maybe a few hours, days, or weeks.

If Yellen is hawkish, meaning she indicates things are so rosy a rate hike isn't off the table (she won't give a timeframe), markets will drop. Maybe a lot.

In the end, Janet Yellen's job now is to not spook markets. It's not about the economy, stupid. It's about the markets holding up long enough for the economy to prove they're not in bubble territory and that their lofty levels are justified.

Folks, there isn't enough time on any economic clock for that to happen.

Janet Yellen and the Fed, like all the world's central banks, believe they're gods and can corral the free market and manipulate the world spinning on its axis to their beat.

Words will never be enough to control markets when they decide they've heard enough.

That's what we have to look forward to, no matter what Janet Yellen says today.

Up Next: This Tech Could Save U.S. Elections from Voter Fraud

"Baited breath", oh please, do get it right. It's 'bated breath, from abate or to hold one's breath. Baited makes no sense.