With some central banks loading up on gold and others dumping it, it's fair to ask, "What country has the most gold reserves now?"

Some countries have been adding to their gold reserves at spectacular rates – as much as doubling or even tripling their holdings in recent years.

But for all that gold-buying, the United States remains the king of the hill by far.

Related: Why the Fort Knox Gold Might Not Be There Anymore

The United States dominates an elite group of 15 central banks (technically the U.S. Federal Reserve holds the nation's gold) that hold nearly all — 83.2% — of the world's 32,803.5 tonnes of gold reserves. 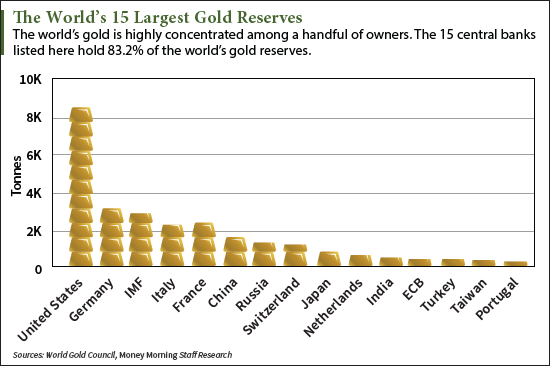 What's interesting about this list of countries with the most gold reserves is not necessarily who's on it, but who's been buying, who's been selling, and who's been standing pat.

Back then, foreign countries could exchange their dollars for gold. And as the U.S. government and U.S. corporations ramped up spending in those years, foreign central banks accumulated a lot of dollars. And they eagerly redeemed those dollars for U.S. gold.

As a result, U.S. gold reserves dropped roughly 50% between 1948 and 1968. In desperation, President Richard Nixon suddenly closed the gold window in August 1971 (the so-called "Nixon Shock"), ending the ability of foreign central banks to swap dollars for gold.

Today, most countries use gold as a component of the foreign reserves they hold. But not all countries consider holding gold a priority.

Canada, for example, sold off the last of its gold reserves earlier this year, concluding a gold divestment policy begun in the 1980s. The Bank of Canada said it dumped its gold so it could better diversify into "assets that are easily tradable" and because it considers the yellow metal too volatile.

The four countries that have added the most to their gold reserves over the past 10 years are China, Russia, India, and Turkey. Here's why these nations are so keen on gold…

Going by World Gold Council numbers, China has increased its gold reserves by 205.55% since 2006. But China might have much more gold than the official number it reports.

China mines more than 400 tonnes of gold a year, but exports none of it. Some analysts suspect the People's Bank of China has obtained most of that freshly mined gold. That would put China's real gold reserves somewhere north of 3,000 tonnes.

One key motive for China to grow its gold reserves has been its quest to make the yuan a reserve currency. After years of trying, China convinced the International Monetary Fund (IMF) last year to add the yuan to the basket of global currencies known as Special Drawing Rights.

Another reason might be concern about the stability of the U.S. dollar, undermined by years of Federal Reserve money printing.

Russia is increasing its gold reserves partly as a hedge against trouble with the United States. The U.S.-led economic sanctions that followed the Russian annexation of Crimea raised concerns in Russia about overdependence on the U.S. dollar, which dominates international trade. Russia has funded its gold-buying by selling off U.S. Treasuries.

Last year the head of the Russian central bank, Elvira Nabiullina, said she intended to double the nation's gold reserves "to be able to cover negative capital outflow for the next two to three years."

Like China, Russia is adding a lot of gold by purchasing the output of its domestic mines. Russia mined 291 tonnes of gold last year. 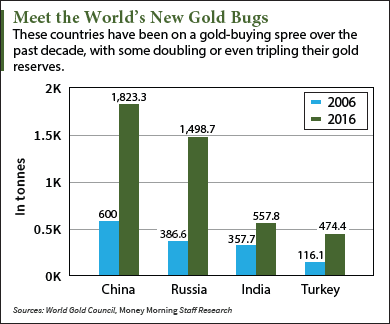 The culture of India prizes gold, but that's not why the Reserve Bank of India (RBI) has been stockpiling the yellow metal.

The primary motive appears to be an attempt to diversify India's foreign reserves, particularly in the wake of the 2008 financial crisis. Like other nations, India's goal is to reduce its reliance on U.S. dollars.

In addition to diversifying its foreign reserves away from the U.S. dollar, Turkey has some unique reasons for boosting its gold reserves.

The wounds from a liquidity crisis in 1999-2000 remain fresh in the minds of Turkish central bankers. More gold helps protect the Turkish currency, the lira, while helping ensure Turkish banks have sufficient reserves to meet foreign currency liabilities.

Turkey has additional incentive given its position on the doorstep of Middle Eastern turmoil. The country's gold reserves also serve as an insurance policy against future crises.

In addition to these four, dozens of smaller countries also have been increasing their gold reserves in recent years.

"Gold has become increasingly attractive as an alternative to reserve currencies, with the euro, yen, and Swiss franc all weakening against the dollar in 2015, while emerging-market economies have also been keen to diversify away from U.S. assets," noted an Official Monetary and Financial Institutions Forum report published this summer. "Deflationary pressures across many advanced and developing economies raise the importance of gold as a store of value and a hedge against financial market instability."

Next Up: When central banks are snapping up gold, that's one more catalyst for gold prices. And it's one reason why these gold companies are insanely attractive right now…

It is my understanding is that the Federal Reserve has refused the Congress request for an audit of its inventory .Is this true ,and if so ,why

What a steaming pile of … nonsense. Anybody that still believes the US still has over 8,000 tons of gold is naive. That gold was used to pervert true price discovery the the ludicrously low levels we see today, and is essentially long gone.

Quickest way to refute the obvious is agree to an audit. Don't hold your breath LOL!

Do we take our cash out of the banks? Do we invest in gold and silver?