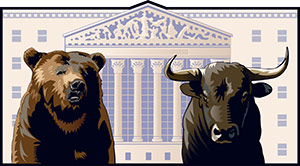 This morning (Monday), the Dow Jones Industrial Average is flat as investors attempted to make sense of the U.S. Federal Reserve's statements on its next interest rate hike.

On Saturday, the U.S. Federal Reserve meeting concluded at Jackson Hole, Wyoming. Federal Reserve Chair Janet Yellen and Vice Chair Stanley Fischer both made the case that improving economic data could push the central bank to raise interest rates in the coming months.

Of course, one has to remember that this meeting consists of central bankers who have engaged in reckless policy experimentation for decades.

If the United States wants to restore sanity to its economy, here's how the nation can end the Federal Reserve and replace the scheming central bank.

On Friday, the Dow slipped 53 points after Fed Vice Chair Stanley Fischer argued the case for a rate hike. Meanwhile, Yellen said the "U.S. economy is close to the Fed's goals for employment and price stability."

Now, here's a look at today's most important market events and stocks, plus today's economic calendar.

Trending Now: How This Disruptive Technology Could Save U.S. Elections

Oil prices slid this morning thanks to a stronger dollar. This morning, the WTI crude price was off 1.3%, while Brent crude slid 1.4%. Meanwhile, OPEC is under the microscope as the global oil cartel prepares to meet next month to discuss a possible production freeze to support crude prices. Iran announced over the weekend that it plans to ramp up production after Saudi Arabia produced record crude output last month. Money Morning Global Energy Strategist Dr. Kent Moors says that investors should anticipate an OPEC deal, but not the one that pundits are debating right now.