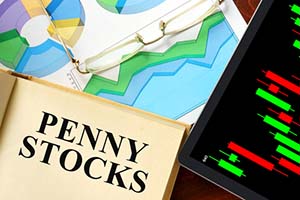 We don't have any recommendations on the penny stocks on our weekly list – that's for you to decide. But we are bringing readers one of our favorite penny stocks to buy now, after we list the top five performers this week.

We're bullish about this penny stock because its company has a disruptive technology that could revitalize a dying U.S. industry. This company also operates in an $18 billion market and has several projects coming up that could send its stock soaring.

Before we get to our pick, here are the five top penny stocks this week – including one that's up more than 700% this year…

Adamis Pharmaceuticals develops various pharmaceutical products for allergy and respiratory ailments. One of its leading products is a dry powder inhaler that it bought from 3M Co. (NYSE: MMM). ADMP rose 30% last week, but there's no apparent catalyst for its rise. An inexplicable rise in a penny stock is usually a sign of general investor speculation. ADMP is trading at $3.06 per share as of Monday intraday and is down 45% year to date.

Amedica is a biomaterial company that develops various medical devices, ranging from spinal infusion pieces to hip and knee components. The company uses a special silicon nitride ceramic technology in most of its products. AMDA was up 57% last week, but there's no apparent catalyst behind its rise. AMDA stock is trading at just $0.980 per share as of Monday intraday and is down 44% YTD.

Nymox is a biopharmaceutical company that develops products for older populations. The company is currently undergoing clinical trials for drugs that treat BPH and Alzheimer's disease. Nymox was up 51% last week, but there was no apparent catalyst behind its rise. NYMX stock is trading at $4.16 per share as of Monday intraday and is up 26% YTD.

China Commercial offers direct loans, loan guarantees, and financial leasing services to small- and medium-sized businesses in China. CCCR stock rose 74% last week, but there was no apparent catalyst behind its rise. The company announced its quarterly earnings report on Aug. 22, reporting lower net income and lower interest income. CCCR stock is trading at $2.71 per share as of Monday intraday and is up 720% YTD. CCCR has been trending upward ever since the company appointed a new president and chief executive officer in July. The new leadership brought the company experience in microcredit lending and corporate governance, according to a press release.

SunLink Health owns several healthcare businesses in the United States, including three community hospitals and two nursing homes. The company operates under two segments: Healthcare Facilities and Specialty Pharmacy. SSY stock rose almost 100% last week after it announced on Aug. 19 that one of its subsidiaries is selling its regional hospital for $15 million. SSY is trading at $1.33 per share as of Monday intraday and is up 44% YTD.

While those stocks have already seen impressive gains, we've recently found one of the most promising penny stocks on the market. This stock could double your money… and even save a dying U.S. industry at the same time…

Finding a surefire penny stock winner isn't easy. But this company is the most promising penny stock we've seen in a while. The hydrogen fuel cell company is a leading creator of "green energy." And it doesn't just provide energy, it makes energy more efficient… and cleaner. In fact, its fuel cells could save the entire struggling coal industry from its burdensome environmental regulations. What's more, the company estimates it operates in an $18 billion market. And this year, it's taking its first chunk out of that market with an ambitious $500 million project. Many analysts say the company's stock will double its current price in one year, which means investors that buy it now could potentially double their money. Check out more on this promising stock, right here…