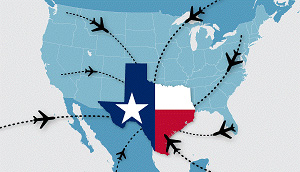 As many of you know, I was born in Canada but moved to the great State of Texas 26 years ago when I bought a controlling stake in U.S. Global Investors. As a "Tex-Can," I'm so proud of my adoptive state and grateful for all that it's done to help our company flourish.

But you don't have to be a business owner to love and appreciate Texas. As you'll see, many people are moving to the Lone Star State to take advantage of its many employment opportunities, tax advantages, and all-around greatness. Below are just 11 reasons why more and more people want to move to Texas!

No. 1. Check Out Our Mettle

The 2016 Olympic Games in Rio de Janeiro now belong to history, and by a very wide margin, American competitors walked away with the most medals: 121 altogether. Looking at gold medals, the United States still ranked first, with 46 won. But if we took away what Texas collected, the Land of the Free would have fallen to third place, behind the UK and China. 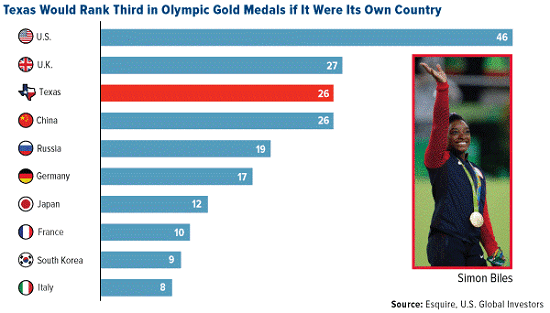 Texas is competitive in more than just Olympic events, of course. The state has the second-largest gross domestic product (GDP) in the Union, following California. If it were its own country, Texas would clock in at number 12 in the world, between Canada and Australia. 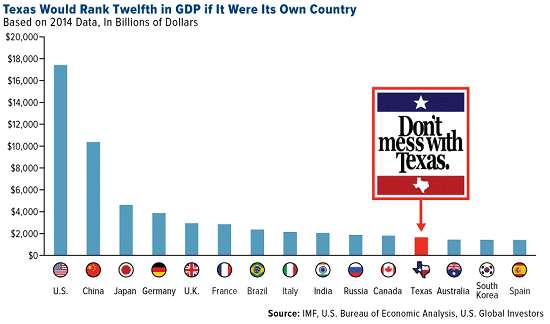 If Texas were its own nation, in fact, its economy would be about the same size as Canada's. 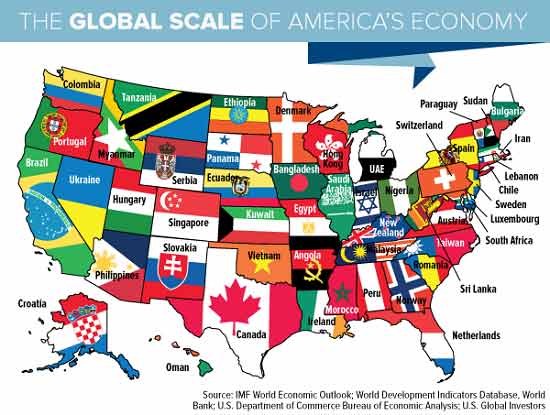 Another thing Texas has in common with Canada? Black gold. Barrelsful of it.

Last month, Oslo-based Rystad Energy shared a report that shows the United States as now having the world's largest reserve of recoverable oil, with 264 billion barrels in existing fields, unconventional shale, and as-yet undiscovered areas. This is the first time such a report has moved the country ahead of both Saudi Arabia and Russia.

Were it not for the contributions of oil-rich Texas, however, this might not be the case. Thanks in large part to fracking in prolific fields such as the Eagle Ford Formation and Sprayberry Trend, the state leads all others in crude production, annually gushing out more than a third of total U.S. output.

You can see how the fracking boom helped propel the state into the same league as major OPEC nations Iraq, Iran, United Arab Emirates, and Kuwait. 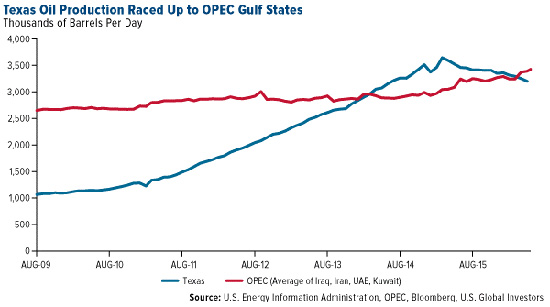 Texas is more than oil, of course. The natural-resource-rich state is also known for its natural gas production (it leads the nation), coal, electricity (again, number one in the States), and renewable energy – specifically, wind energy. 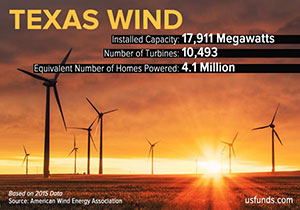 Thanks to Competitive Renewable Energy Zones (CREZ) and $33 billion in invested capital, Texas ranks first in the nation for installed wind capacity and the number of megawatts generated by wind. In 2015, close to 10% of the state's electricity production came from wind, according to the American Wind Energy Association.

With an estimated 17,000 Texans already employed in the state's wind energy industry, Texas is in the process of installing an additional 5,200 megawatts.

Speaking of employment, that's something else you can find a lot of in the Lone Star State. The oil industry might have taken a hit from falling crude prices, but the Texas economy has proven resilient. As you can see, the 2007-2008 global financial crisis had much less of an impact on state unemployment rates compared to other major countries and regions such as Canada, Australia, the European Union, and the United States. 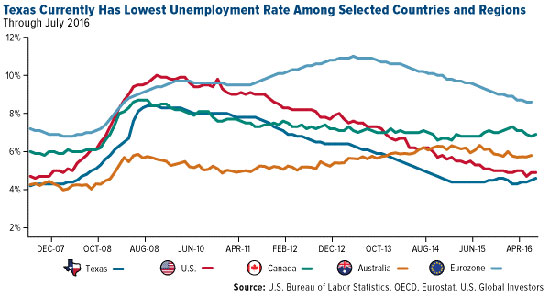 No. 7. All Roads Lead to Texas

Important to keeping business and commerce flowing, as well as helping commuters travel to and from their work, are roads. Texas has them in spades. According to the U.S. Department of Transportation, the state is connected by 313,596 miles of public road, the most of any state. With 18 numbered interstate highways, it also has more interstate miles than any other does.

If it were its own country, Texas would rank 13th by road network size, somewhere between Germany and Sweden.

At only $0.20 per gallon, the Texas gas tax is among the most reasonable in the nation. And because almost that entire amount goes to public transportation – $0.05 is devoted to public education – Texas has some of the best roads in the United States.

While we're on the topic of transportation, Texas also boasts the most airports of any state – 1,415, according to StateMaster. Two of the four major U.S. carriers, American Airlines and Southwest Airlines, are headquartered in the Lone Star State.

There are only seven states without an income tax, Texas among them. (Alaska, Florida, Nevada, South Dakota, Washington, and Wyoming round out the list.) 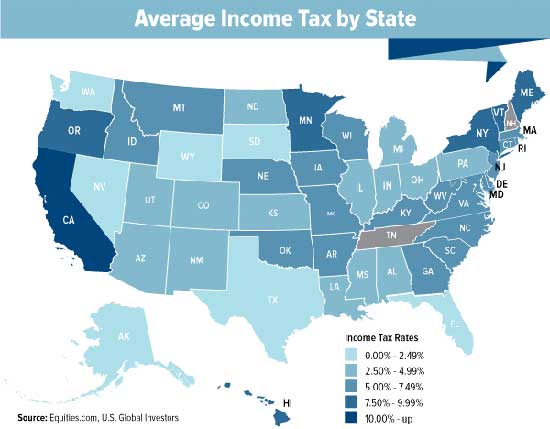 Neither does the state impose a corporate income tax, and last summer, Governor Gregg Abbott approved $4 billion in tax cuts for businesses and homeowners. 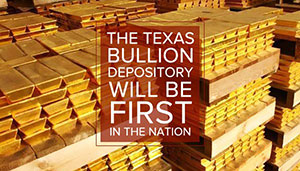 Governor Abbott is also responsible for what will be a first in the United States. More than a year after he signed a law to repatriate $1 billion in Texas gold bullion from a private HSBC vault in New York, construction will soon begin on the Texas Bullion Depository. Such a state-run gold depository doesn't currently exist anywhere else in the United States. It's hoped that it will help turn Texas into a "financial Mecca," in the words of one state senator.

Low taxes are one of the main appeals driving Texas' rapid population growth. According to the Census Bureau, five of the 11 fastest-growing U.S. cities by population can be found in Texas. Ranking number two in the nation is New Braunfels, a lovely town originally settled by Germans that lies midway between San Antonio and Austin. 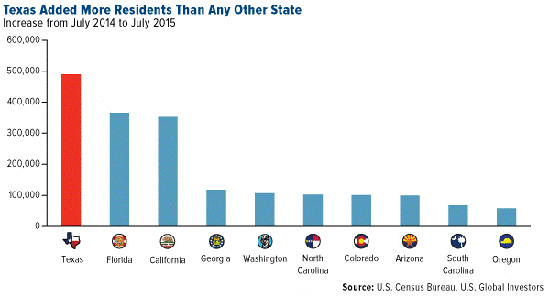 It's not just people moving to Texas, though. Companies are as well – specifically tech companies, and, to get even more granular, Silicon Valley tech companies. The San Francisco Chronicle reports that, in recent years, more than $1 billion in taxable income has flowed from the Bay Area to Texas, as tech firms have sought not just lower taxes, but also simpler regulation.

For the last three years, Texas has led the nation in high-tech exports, supplying the world with everything from semiconductors to communications equipment. Last year, in fact, the state's total sales amount exceeded California's by a whopping $6.3 billion.

No wonder so many people are choosing Texas as the place to hang their hat!

All opinions expressed and data provided are subject to change without notice. Some of these opinions may not be appropriate to every investor. By clicking the link(s) above, you will be directed to a third-party website(s). U.S. Global Investors does not endorse all information supplied by this/these website(s) and is not responsible for its/their content.

U.S. Global Investors, Inc. is an investment adviser registered with the Securities and Exchange Commission ("SEC"). This does not mean that we are sponsored, recommended, or approved by the SEC, or that our abilities or qualifications in any respect have been passed upon by the SEC or any officer of the SEC.

Certain materials in this commentary may contain dated information. The information provided was current at the time of publication.]