Investors and traders could be forgiven for calling this market downright boring, but the truth is, for technical guys like me, we're living through an unprecedented, historic moment.

You see, I looked all the way back to the Camelot days of John F. Kennedy nearly 55 years ago and failed to find another instance of range-bound, "tight" markets enduring for so long.

There are some serious implications in this record low volatility, but before I jump into what this means for investors, let me show you just how strange these persistent doldrums look on my charts…

There's No Historical Precedent for "the Box"

Let's take a look at a chart of the S&P 500 showing the tight-range box that has plagued us for weeks: 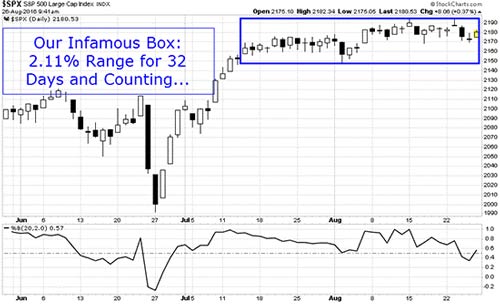 Now, there are many indexes, exchange-traded funds (ETFs), mutual funds, and so on, that track the S&P 500.

But the S&P 500 Cash Index is the only one that is not directly tradeable, yet still a simple mathematical representation of the average price of each of the 500 stocks.

They are just weighted by their individual market capitalizations.

What this means is big stocks count for more in the price of the index.

Those are visually represented on bar charts like the one I just shared with you.

They're also stored by data services. Data back to Jan. 2, 1962, is readily available. Before that, most data services only have closing prices.

So that means we can crunch the numbers going back nearly 54 years and eight months, give or take a few days.

Armed with these numbers, I wanted to see when the last time we had 30 trading days as tight as our current range was.

The answer is… never.

Let that sink in a bit…

I even had a colleague of mine check my math; I checked every rolling 30-day period since January 1962. The methodology was pretty straightforward:

And now we're back to my big proclamation I made at the beginning: In terms of price range, we are currently experiencing the tightest volatility contraction since JFK was president.

It follows that there have been multiple generations of traders who have never seen volatility this tight. So in some ways, we're plowing new ground here.

We certainly can't count on Janet Yellen's Federal Reserve to shake markets out of their summer snooze, even if only to fall out of bed.

Jackson Hole Failed to Impress, Even to the Downside

But after digging into the meat of her speech, it seems that traders feel Yellen has continued to be a one-trick pony.

So Yellen's "biggest speech of the year" has come and gone and reaction was decidedly muted, with the Dow moving toward a net loss of barely 69 points on Friday.

With markets this tight, even a tailspin, some kind of movement with accompanying conviction, would have been preferable, but that 69-point knee-jerk reaction quickly reversed course.

But the fact remains that Yellen opened the door to a September interest rate hike using the same hedges she's used in the past.

In other words, after looking at the numbers released by the Commerce Department last week, it looks like the U.S. economy's trusty "bright spot" is here to stay.

On Friday, the Commerce Department released its second estimate of gross domestic product, and it's clear that consumers are still the biggest drivers of the U.S. economy.

According to the data, the economy grew 1.1% while personal consumption, which surged in the second quarter, was revised even higher to a 4.4% rate from 4.2%.

That's the fastest pace we've seen since the end of 2014.

The important takeaway here is that strong consumer spending, which has been encouraged by a steady supply of jobs, should continue to hold off recession concerns, even if it doesn't herald robust economic growth.

That no-news scenario is hardly likely to get traders' blood flowing again.

But there are a few forces that could knock some life back into the markets and break us out of this tight, tight trading range.

The monthly employment numbers are set to come out Friday.

With the U.S. elections moving ever closer, this number will be widely watched and could have market-moving potential.

In addition, the start of September will see trading desks repopulated as the "troops" return from August vacations. As odd as it sounds, this "return to work" usually prompts additional trading activity.

But until that happens, the markets remain in the deepest doldrums in which anyone in living memory has ever traded.

So I wouldn't recommend stepping out in front of any strong push up until we have a high probability setup for the move down.

But rest assured, we'll be jumping in when the reward-to-risk profile is right.

Until then, I recommend trading selectively with tightly guarded capital.

In my Stealth Profits Trader service, for instance, I've programmed the Stealth Stock Trading Indicator's strategies to be extremely picky – outright cautious, even – when we're in sideways markets combined with ultra-low volatility. There's just not enough movement to warrant exposing a large portion of our capital right now. It's worth waiting to move into big trades until more favorable conditions, up or down, present themselves.

In the meantime, it's worthwhile to prune your speculative holdings and stick to quality stocks like Facebook Inc. (Nasdaq: FB) and Lockheed Martin Corp. (NYSE: LMT), for instance. And what's more, look for modest profit opportunities outside of stocks. In my Stealth Profits Trader service, for instance, we're playing coffee, bonds, and oil, and most of our positions are firmly in the green.

In any case, this is certainly going to be an interesting week to watch.

D.R. Is Working on a Massive Opportunity

If you missed our original story of D.R.'s groundbreaking market discovery – a new pattern that can pinpoint triple-digit winners like clockwork – don't worry. He's on to even more incredible things now – and your timing is perfect. See his new big announcement here. It could change your life.