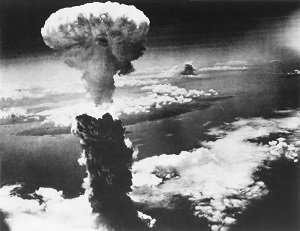 Since the first nuclear bombs were dropped on Japan on Aug. 6 and Aug. 9, 1945, it's hard not to contemplate what might spark the next world war -- and how it might end.

But while we have successfully avoided blowing ourselves into oblivion so far, there have been moments over the past 60 years when the start of World War 3 was a matter of a phone call away.

And the American public has largely been none the wiser.

Here's a look at 10 alarming occasions when miscommunications and other gaffes nearly led to global disaster...

On the morning of Nov. 9, 1979, technicians at Colorado's North American Aerospace Defense (NORAD) command center were shocked to see their displays light up with the ultimate horror: a full-scale Soviet nuclear attack bearing down on the United States.

NORAD was to launch 10 interceptor fighter jets, get the president on an escape plane, and prepare to launch a retaliatory strike in its initial response. But before the command center made any moves, one technician realized he'd accidentally activated a training program to simulate a Soviet attack.

It was a human error that almost lead to war.

World War 3 Close Call No. 9: The Attack on Yeonpyeong

The United States and other countries around the world plead for restraint. Thankfully, South Korea heeded their calls. Speculation behind North Korea's motives mostly focused on South Korea's recent upgrade in global status that year, as the small island nation hosted the G20 Summit and gained international prestige for focusing its future agenda on global economics.

In October 1962, a guard at a Duluth, Minnesota, air base saw a figure climbing the security fence. The guard shot at the intruder and set off the sabotage alarm, which automatically set off alarms at nearby bases.

But the wrong alarm went off at nearby Volk Field Air National Guard Base in Wisconsin. Instead of the sabotage alarm, the Klaxon sounded, signaling a nuclear war and ordering nuclear-armed F-106A interceptors to take off.

By the time communication with Duluth highlighted the error, aircraft were starting down the runway at Volk. A car racing from the command center successfully signaled the aircraft to stop.

And it turned out the intruder in Minnesota had been a wandering bear.

At dawn on the morning of Jan. 25, 1995, a Norwegian-U.S. joint research rocket, Black Brant XII, lifted off from an island off Norway's northwest coast. Ninety-three seconds after launch, the rocket exploded upwards, hurling itself and its payload even higher into the air.

The rocket, designed to study the aurora borealis, wound up as a wholly different kind of experiment instead: a test of U.S.-Russian relations, with the Cold War barely in the rearview mirror...

Yeltsin conferred with defense ministers by telephone for several tense moments until he learned the rocket's actual intent.

On the evening of Sept. 26, 1983, in a secret bunker operated by the Soviets, Commander Stanislav Petrov had just sat down when a loud siren went off, warning him that the United States had just fired missiles toward the USSR, according to a 2013 report from the BBC.

Check Out: How Russian spies nearly managed to cause a U.S. stock market crash...

Petrov knew he only had a few minutes to respond and that the decision to fire back was left solely to his discretion.

The commander ultimately decided against. It occurred to him the computer system that had issued the warning was new and could be experiencing a glitch, the BBC report claimed. He chose to err on the side of caution -- a decision that likely saved many lives.

On Oct. 24, 1973, the United States sponsored a cease-fire to end the Arab-Israeli War. Still, further fighting between Egyptian and Israeli troops in Egypt's Sinai Desert continued.

Several U.S. officials, including then Secretary of State Henry Kissinger, entered "DEFCON Three" to warn the USSR not to intervene with the events in Sinai. A DEFCON Three warning requires troops to immediately prepare for war. Kissinger felt that Russia could not counter this tactic, reported The Christian Science Monitor in 1993.

The DEFCON alert system is used by the U.S. Armed Forces to assign levels of military readiness for possible attacks. There are five qualifying levels - with DEFCON Five being the least severe and DEFCON One the most.

Typically, only the U.S. president can declare a DEFCON status, but then President Richard Nixon was asleep when Kissinger learned that the Soviet Union was considering interfering in Sinai. The president purportedly could not be bothered to wake up.

As a result of Kissinger's decision, Russia's Minister of Defense Andrei Grechko, and the head of the KGB, Yuri Andropov, claimed Russia felt threatened by the U.S.' DEFCON status...

Ultimately, the Soviet Union decided not to retaliate because it was not prepared to engage in large-scale war.

Though that's an insanely large amount of missiles, defense technicians at the Strategic Air Command (SAC) in Omaha, Nebraska, weren't going to take any chances. SAC personnel called NORAD, which said it had no indication of an attack.

After a few minutes, SAC screens cleared. Another few moments and SAC screens reported that Soviet ICBMs (intercontinental ballistic missiles) had been launched toward the United States. The National Military Command Center in the Pentagon received a similar reading.

That's when the SAC duty controller directed all alert crews at its post to move to their B-52 bombers and to start their engines, so that the planes could take off quickly and not be destroyed on the ground by a nuclear attack. Land-based missile crews were put on a high state of alert and battle-control aircraft prepared for flight. In Hawaii, the airborne post of the Pacific Command took off, ready to pass messages to U.S. warships if necessary.

Then the SAC screens cleared again -- as did the Pentagon's.

It was later discovered that a single integrated circuit chip in the defense system's computer network malfunctioned, causing various command posts across the nation to receive readings that the United States was under attack.

In 1971, the Vietnam War was still in full swing, lending to mass confusion when America's Emergency Broadcast System went off at 9:33 a.m on Feb. 20.

Turns out a teletype operator at the commencement of a regularly scheduled test inadvertently fed the incorrect punched tape into the transmitter. This sent out an emergency message to 5,000 radio stations and 800 television stations across the United States.

For the next 40 minutes, regular programming was put on hold as listeners and broadcasters anxiously waited to hear an announcement from the White House.

While the false alarm revealed the massive impact a simple human error can have, it also exposed just how unprepared the media truly was. You see, radio and TV stations did not know the correct procedures to follow after the broadcast. Some stations couldn't find their verification codes that an emergency was actually in effect on their daily code word lists, while others simply couldn't even find their lists. And some stations failed even to receive the alert at all.

World War 3 Close Call No. 2: The U2 Jet Flies into Soviet Airspace

On the night of Oct. 26, 1982, a U2 high altitude reconnaissance jet pilot was ordered to fly a new route over the North Pole.

That night the aurora borealis prevented the pilot from getting clear navigational readings and the plane strayed over the Chukotski Peninsula. Soviet MIG interceptors took off with orders to shoot down the U2. Meanwhile, the U.S. pilot contacted his command post and was ordered to fly due east towards Alaska. Unfortunately, he ran out of fuel while still over Siberia.

In response to his SOS, U.S. F102-A fighters were launched to escort him on his glide back to Alaska, with orders to prevent the MIGs from entering U.S. airspace. The U.S. interceptor aircraft were armed with nuclear missiles, and the pilots could have used any one of them at their own discretion.

Just before 9 a.m. on Oct. 28, 1962, radar operators in Moorestown, New Jersey, informed NORAD that a nuclear attack was under way. A test tape simulating a missile launch from Cuba was being run while, at the same time, a satellite just happened to be passing over the horizon.

Operators reported to NORAD that impact was expected 18 miles west of Tampa at 9:02 a.m.

Under such circumstances, NORAD does not take action until impact has been made.

Since the area nearby Tampa didn't explode that morning, NORAD deemed Moorestown's warning a false alarm.

In the four years he's been following the South China Sea conflict, Money Morning Executive Editor William Patalon, III, has offered a single warning: Any time there's a dispute like this, it only takes one miscommunication, one mistake, one overtly aggressive act... to ignite real shooting.

"As cliché as it sounds," Patalon writes, "emotions are running high in that part of the world."

You see, besides China, Japan, Taiwan, Vietnam, Brunei, Malaysia, and the Philippines all claim one section or another of the various regions in the South China Sea. And on top of that, the United States is hanging around trying to keep the peace.

With so many countries at loggerheads, including two global powerhouses, it's no wonder the words "World War Three" surface when the South China Sea is discussed...

If ever WWIII erupts, there won't be any speculations to be made, and the world as we know it now won't exist anymore. Money markets will be a thing of the past, and commerce as we know it now will be gone. Let's hope that really get the picture clear : This war will not be redeemable. It will only sign bankrupty for every stockmarkets around the world. So bring Jin-Peng to his senses over the south sea dispute. You don't want to be there to live the mess.

You forgot the time when, unbeknownst to Reagan, the mic was still on and the audience heard his joke about commence launching missiles on the Soviet Union. That was August, 1983. The KGB heard that, but didn't take it as a light joke, particularly because Reagan was already amassing military equipment all over the USA.

It wasn't until after the Soviet Union was gone and the KGB files were released that it was revealed how we came to war. A journalist going through the files found that the KGB was totally convinced the USA was really planning an attack, and around December the Soviets had decided on a first strike.

I know why they changed their minds, a powerful force of nature was deliberately stimulated in Iowa, of all places, to directly counteract the tensions building in the world, but skeptical minds all too often see things only when they believe it so no use telling, they will say it was too far fetched even in the face of strong evidence. But it's been proven effective as a technology for creating an influence of peace, even rigorously peer-reviewed and published in conflict resolution journals. But governments are still afraid to employ it because they just don't understand it and probably think they would take flak if they tried it, despite over 50 research studies that show it's effective. It's a technology ahead of it's time—except when it is desperately needed it will be too late.

There is a way to make money from this technology, but it's an investment that everyone needs to be convinced worth signing on at once, nobody wants to step up for everyone else. In this case, individual greed holds us all back from peace and accelerated prosperity overall.

There is a lot too loss in a world war 3 and also there are no winner in the end
I hope people understand this be for they act.???