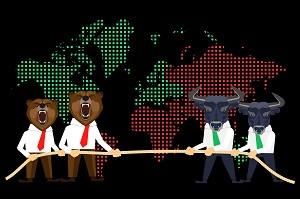 This morning, the Dow Jones Industrial Average was sliding on Wednesday as investors weighed the latest jobs data for the month of August. According to a report by ADP, the U.S. private sector added 177,000 jobs this month, slightly higher than economist expectations of 175,000.

The Conference Board announced that U.S. consumer confidence hit an 11-month high, while the Case-Shiller Index indicated another bump in home prices in the month of June.

In rate hike news, Federal Reserve Bank of Chicago President Charles Evans poured some cold water on raising rates. During a conference in Beijing this morning, Evans announced that because investors expect low interest rates in the future, the Federal Reserve can take its time before taking action on monetary policy.

Meanwhile, Boston Fed President Eric Rosengren said that the last eight years of low rates has fueled a dramatic rise in commercial real estate prices. He predicted that any reversal in U.S. economic performance could drive down prices rapidly.

Rosengren worries that rate normalization could make things much worse if the U.S. faces a recession.

Trending News: A Backdoor Way to Profit Now on a New $240 Billion Market

On Tuesday, the Dow slumped 48 points despite strong monthly data on the U.S. economy.

It is going to be a busy day of economic activity, so let's get right to the most important market events and stocks to watch for August 31, 2016.

The Dow Jones Industrial Average projected a 16-point decline as traders weigh a report on job growth for the month of August. Markets are awaiting Friday's report from the U.S. Labor Department on the official August unemployment rate. Investors have been speculating on the timing of the next interest rate hike and the strength of the U.S. labor markets.

Oil prices were sliding again as the dollar continues to show gains. With the markets anticipating a rate hike by the Federal Reserve in the months ahead, oil traders are also speculating on whether global oil cartel OPEC may freeze production in order to support prices. This morning, the WTI crude price was off 1.1%, while Brent crude slid 1.4%.

In deal news, shares of Commerzbank AG (ADR) (OTCMKTS: CRZBY) and Deutsche Bank AG (USA) (NYSE: DB) pushed up more than 1.2% and 3.2%, respectively, this morning. Shares of Germany's two largest financial lenders were pushing higher on speculation that the two companies could merge in the coming months. The CEO of Deutsche Bank is pushing for the merger as concerns continue to rise about European banking profits and the sector's long-term sustainability.

But the big news this morning centers on Democratic presidential candidate Hillary Clinton. The U.S. State Department announced that it has discovered another 30 emails related to Benghazi. Meanwhile, everyone is asking: When will the FBI release the Hillary Clinton interview notes?

The answer to that question is coming very soon. In fact, it could be as soon as today.