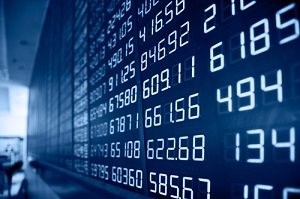 The Federal Reserve was back in focus as traders eyed a fresh round of private-sector employment data. This morning, ADP reported the U.S. private sector added 177,000 jobs this month, slightly higher than economist expectations of 175,000. Of course, all eyes are fixed on Friday's report on unemployment in July. Friday's report could provide additional fuel for the Fed to take action on interest rates in 2016.

The sharp decline in oil prices battered large-cap energy stocks. Oil prices dipped as the dollar continues to show gains and markets anticipate a rate hike by the Fed. Oil traders are also speculating on whether global oil cartel OPEC may freeze production in order to support prices. This afternoon, the WTI crude price was off 3.5%, while Brent crude slid 2.7%.

Federal Reserve Bank of Chicago President Charles Evans poured some cold water on raising rates. During a conference in Beijing this morning, Evans announced that because investors expect low interest rates in the future, the Federal Reserve can take its time before taking action on monetary policy.

On the earnings front, shares of H&R Block Inc. (NYSE: HRB) were the largest weight on the S&P 500 today after the company reported a huge miss in quarterly revenue. After the bell, look for earnings reports from Salesforce.com Inc. (NYSE: CRM), Box Inc. (NYSE: BOX), Infoblox Inc. (Nasdaq: BLOX), and Five Below Inc. (Nasdaq: FIVE).

But the big story today was in Germany. Shares of Commerzbank AG (OTCMKTS ADR: CRZBY) and Deutsche Bank AG (USA) (NYSE: DB) pushed up more than 2.8% and 2.6%, respectively, this morning. Shares of Germany's two largest financial lenders were pushing higher on speculation that the two companies could merge in the coming months. The CEO of Deutsche Bank is pushing for the merger as concerns continue to rise about European banking profits and the sector's long-term sustainability.

Up Next: Legendary investor Jim Rogers has added an unlikely investing target to his standbys of gold, farmland, and China. But you won't believe where he sees so much investment potential. Check out Rogers' latest insight, right here.