Alternative and renewable energy sources have been making some impressive gains over the past few years in both reducing the cost of generation and improving efficiency. The price of U.S. solar power, for example, has dropped more than 70% since 2009 alone.

But the "holy grail" remains something called "grid parity" – providing power at a cost equal to or less than the price of power obtained from the grid (read: from coal or natural gas).

The solution may be to use renewable energy sources that don't have the down time of solar or wind. Biofuels (from algae, waste, wood shavings, etc.) is one possibility we have discussed recently.

But another very promising "hybrid" approach has recently been proposed.

If it succeeds, it could revolutionize the entire U.S. energy sector…

Wave Power Has No Downtime 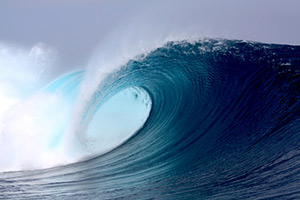 I'm talking about a new form of wave power.

Ocean and tidal waves are predictable and don't suffer from interruptions, nor does using them for power have any adverse environmental impacts. But the cost has usually limited the application of wave power to cases where there's some other compelling reason to opt for this technology.

For example, the U.S. Navy introduced wave power at its Hawaiian installations for national security purposes – by severing the connection to the state's energy grid, the Navy's bases are no longer vulnerable to power loss in case of an attack.

Of course, that case doesn't address whether wave power could become a larger component in providing power to the grid itself…

This Is a New Kind of Energy "Hybrid"

All studies agree that electricity demand will be accelerating over the next two decades. That makes it essential to have reliable power generation from a number of sources.

Recently in Altenergymag, James Sack of private company Kinetic Wave Power LLC discussed a development pioneered by the company that may hold some promise.

The approach is called the PowerGin and is designed to increase power conversion rates – which translates into how much useful energy is ultimately provided from an energy source's potential total.

As Jim notes in his article, photovoltaic power (that is, solar) has an estimated maximum conversion rate of 24% at mid-day, while wind is at 45% maximum. Meanwhile, conventional ocean power provides 8% to 18%.

And then there is the matter of affordability…

The PowerGin Is at Grid Parity

And that's where Jim's company comes in. It claims to have developed a breakthrough hybrid system that uses the motion of coastal waves to generate power without any social impact or use of water.

The cost, Jim claims, is at grid parity with coal.

Trending Now: This tiny stock could double your money – and also revolutionize a dying industry. Click here to learn more…

Now, the motion of the oceans has long looked promising. One study out of Oregon State University calculated that just 0.2% of the unused energy contained in the world's oceans would be enough to meet the power needs of the entire globe… five times.

But wave power technology, as the cost comparison above shows, has never been cheap enough for full-scale deployment.

Kinetic Wave Power claims to have changed that with their "breakthrough" hybrid approach. Here's how…

Cutting Costs by Using All Parts of a Wave

In essence, waves move in two ways: vertically (the rise and fall of a wave) and horizontally (the push and pull forwards and backwards, as well as the swirling, of a wave).

Existing wave power systems tap only one of these sources of energy (typically the vertical one). But Kinetic Wave Power's PowerGin uses both, as well as being able to generate power from the smaller, less consistent waves common along the U.S. coast.

The system uses two 80-foot-long rotors with "buckets" attached to them. These buckets, as you can see in the image below, capture waves and are pushed down by them, causing the whole rotor to spin.

Meanwhile, a ramp extended between the two rotors pushes water up, turning the horizontal movement of water into a vertical wave that then pushes down on the rotor "buckets," generating even more power. 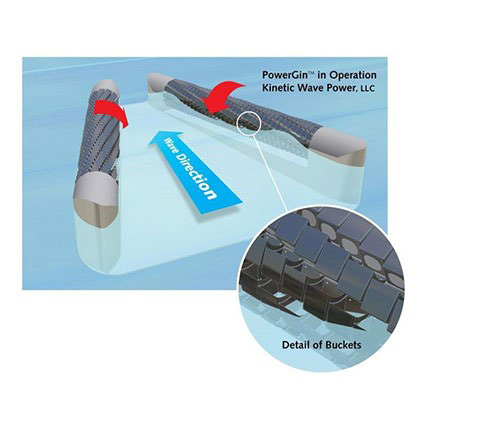 The claims for the new system are resulting in active market interest. For example, the company claims its system can achieve a conversion rate of 20% to 30% in weak and inconsistent U.S. coastal waves, as opposed to the 12% to 18% achieved by existing wave power.

And for any fans of solar power out there, Jim points out that waves are really a concentrated form of solar and wind power (as well as tidal effects, of course), with an energy density eight to 10 times that of wind power.

A "park" of these generators could potentially power an industrial site or a large city, all out of sight out in the ocean.

Limited field studies of the PowerGin system have been encouraging, but there is still need for more detailed testing. However, if the hybrid system proves commercially viable, this may be a true game-changer for renewables, and for the energy industry as a whole.

I'll be keeping a close eye on this one…

Up Next: An OPEC deal is coming – but not September, and not the kind of deal pundits expect…