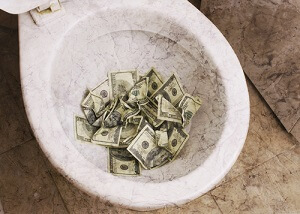 Fischer didn't elaborate, but he said the central banks in other countries "basically think they're quite successful."

This is the typical vagueness offered by the Fed regarding almost any policy. However, Fischer has been a professor at the MIT Department of Economics, the governor of the Bank of Israel, and a chief economist at the World Bank. So when he weighs in on the economy, it's worth hearing what he has to say.

The problem, though, is negative interest rates are just a theory without a proven track record. Theories are nice in the classroom, but you can't bet the future of an entire economy on one.

Unlike Fischer, our gurus at Money Morning have been quite clear about why negative-interest-rate policies (NIRP) are a disaster…

"Negative-interest-rate policy (NIRP) is not merely some technical monetary policy tool; it is a tactic with profound political and moral consequences that must be exposed as a betrayal of the social compact between governments and citizens," Money Morning Global Credit Strategist Michael Lewitt said on Feb. 18.

There are two major reasons why negative interest rates are not only not working, but also leading us to an economic meltdown.

First, NIRP will destroy the profitability of banks. That's important because the financial sector accounted for nearly 17% of the total global wealth in 2014, according to Investopedia.com projections.

Editor's Note: You could become a Goldman Sachs partner for just one dollar. But you shouldn't…

"Loan demand isn't growing so banks can't raise rates," Money Morning Capital Wave Strategist Shah Gilani said on Feb. 24. "And worse, if depositors are going to be charged to park their money in banks, or fear they'd be denied access to their cash residing in banks, they'll pull their deposits and create all kinds of havoc for banks."

There's already a case where a small German bank (Raiffeisenbank Gmund am Tegernsee) is charging its customers 0.4%, as of Sept. 1, to keep money at the bank.

And because bank customers are getting charged, people are keeping their money at home and providing the banks with less money to lend.

And Achleitner is exactly right. Because European banks are starting to pass on the cost of negative interest rates to consumers and overall economic fear, German safe makers are experiencing a boom in sales.

According to The Wall Street Journal, Burg-Waechter KG (Germany's biggest safe manufacturer) has seen sales jump 25% in the first half of 2016 from the same time a year ago.

Achleitner also said that Europe's banks don't have enough cash to protect themselves in a financial crisis and meet the requirements from the European Central Bank.

The second major reason Fischer is wrong – negative interest rates are not only not working, but also leading us to an economic meltdown – is obvious when you think about it…

Lewitt calls negative interest rates "desperate" and a "last ditch-measure." Central banks should have slowly increased rates, rather than slashing them to nothing. Now, the economy isn't strong enough to handle it.

According to recent data, GDP growth is almost nonexistent in one of the biggest countries in the world using NIRP: Japan.

The nation's GDP growth from January to March was a paltry 0.2%. It's not promising to see such stagnant results from the world's third-largest economy.

Gilani said that the Federal Reserve making interest rates nothing and quantitative easing experiments forced other central banks to follow its insane policies.

Without anyone to keep the Fed in check, things are too out of control to stop now. "But this president, too many past presidents, and the spineless money-grabbers in Congress long ago punted all fiscal responsibility and all economic policy responsibility to the big-bank owned and operated Federal Reserve System," Gilani stated.

Gilani pointed out that this disastrous financial experiment has:

Of course, if Fischer would like to elaborate exactly how negative interest rates "appear to be working," we are all ears.