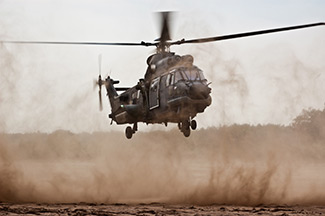 No matter who wins election 2016 – Hillary Clinton or Donald Trump – the best defense stocks will be positioned for strong growth. That's because both the nominees offer huge catalysts for the defense sector…

That's why today (Wednesday) we're bringing you the three best defense stocks to buy before the election 2016 vote in November.

We'll talk about the catalysts these stocks will see after the 2016 election in just a moment. But first, let's quickly look at how these three defense stocks fared under President Obama – someone who's actually dovish compared to our two nominees…

Under President Obama, U.S. defense spending has remained almost the same throughout his tenure. The latest figures from March 2015 show a value of $1.62 trillion, according to CBS. That's only $2 billion less than it was in November 2008.

According to the Defense Department's budget, the U.S. military is no longer specialized for prolonged operations, like Operation Iraqi Freedom under former President George W. Bush. Instead, the government's assets have shifted toward mobilizing a high-tech force, agile enough to defeat stealthy enemies like the Islamic State.

RTN, NOC, and LMT are some of the best defense companies taking advantage of this strategic military shift. All three produce some of the latest and most advanced military technologies in the world. That's why for the past eight years, the Defense Department has handed out contracts to them like candy.

"Congress has routinely ratified national defense budgets north of $550 billion in recent years," said Money Morning Chief Investment Strategist Keith Fitz-Gerald in February. "So it's no wonder that companies like Lockheed, Northrop, and Raytheon have seen their stocks more than double in the last few years." 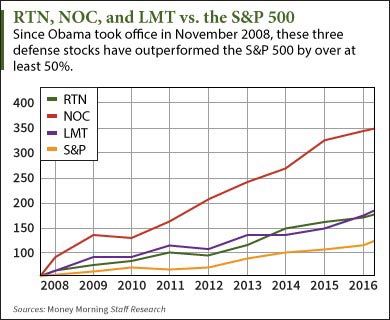 One example of the Defense Department's push for new military technology is Lockheed's new F-35 lightning program. The Air Force, looking to replace its aging B-1 and B-52 bombers, was intrigued by the advanced F-35's long-range strike ability. So in March it offered Lockheed a whopping $400 billion contract. The company is set to build more than 2,400 F-35 fight jets.

Now, President Obama wasn't a war hawk when he came into office. In fact, many would say he was quite the opposite. On the campaign trail in 2008, Obama often called for decreasing "wasteful military spending," according to CNN. But with all the perceived global threats facing the United States, he wasn't able to reduce defense spending as much as he liked.

He's escalated a war in Afghanistan, adding tens of thousands of troops, which cost billions of dollars. He's also ordered over 200 drone strikes in the Middle East.

Defense stock investors did incredibly well under President Obama, especially those that invested in our "big three" defense stocks.

But RTN, NOC, and LMT have just as much upward potential under a president Trump or Clinton – if not more.

Trump isn't necessarily a war hawk, but he does support heavily defending the United States' foreign interests. And while he hasn't offered hard numbers, Trump has given strong hints that he wants to increase U.S. military spending.

"I'm going to make our military so big, so powerful, so strong, that nobody is going to mess with us," Trump said in a short video on his website. Trump often says this at his rallies, too.

And at a rally on Aug. 8 in defense-industry-rich Northern Virginia, Trump agreed with a supporter that congressionally mandated budget cuts are "killing us," according to Politico.

On the campaign trail, Trump has also called the military a "disaster" under President Obama's policies, saying that he wants to rebuild it.

Another clue about Trump's strong position on the defense sector: He wants to update the military's equipment.

At that same rally, Trump suggested that he would seek to get the best and most-updated equipment for the U.S. military. This could mean more and longer contracts for our big three defense companies.

As election 2016 rolls on, we'll see how Trump's defense strategy evolves. If Trump maintains his current trajectory, defense stock investors have a lot to gain from him taking the Oval Office.

Now let's look at what a President Clinton would do for our defense stocks.

Her policies are a little easier to follow than Trump's, since she's had such a long political career…

Unlike Trump, Clinton is an easily defined war hawk. Her policies and statements don't just suggest she wants to increase military spending, they also show that she's not afraid to use military force.

During her time as a senator, Clinton voted in favor of the 2003 War in Iraq. And during her tenure as secretary of state, she also supported numerous troop surges.

Although many see her current policies as an extension of President Obama's, Clinton has often signaled a tougher foreign policy than the Obama administration. In Libya and Syria, she was more willing to use force than Obama, according to Breaking Defense.

She has said on the campaign trail that she wants to "sustain a robust military presence in the Middle East." That suggests she wants to maintain the current troop surge in Afghanistan.

Clinton's tough rhetoric on defense has stopped short of putting a size on the future defense budget. But on her website, she says "we need a smart and sustainable defense budget driven by strategy."

What's most telling of Clinton's willingness to boost defense spending is her stance on the Budget Control Act. This bipartisan act limits the amount of money the government can spend on the military. Clinton wants to end the act's so-called "sequester" for defense spending "in a balanced way."

Taking all of Clinton's statements and hawkish policy positions together, we believe she'll create a favorable growth environment for NOC, LMT, and RTN. She wants the U.S. military to be the "best-equipped and strongest military the world has ever known," according to her website.

That could mean big bucks for our three defense companies. In fact, Fitz-Gerald says that one of these defense stocks, RTN, could rise another 100% from its current price near $140 per share.

"Raytheon has invested a jaw-dropping $3.5 billion in its cybersecurity business over the past 11 years that has, as of yet, gone almost totally unrecognized by the markets," Fitz-Gerald said.

"I don't think that will be the case for long as investors recognize the potential this brings to the table on top of its other defense contracting offerings at a time when America's enemies are growing more sophisticated by the day."

The Bottom Line: No matter who wins election 2016, LMT, NOC, and RTN will be in a favorable growth environment. Both Trump and Clinton will likely increase U.S. military spending and equip the military with the latest technologies. As the biggest defense companies in the United States, our three best defense stock picks have the most to gain from either nominee taking the Oval Office.

Up Next: Both Trump and Clinton have vastly different economic plans for the United States. Here's how each would affect your money…