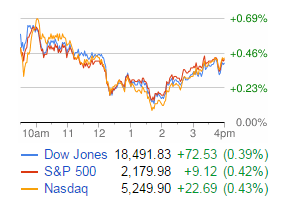 The Dow Jones Industrial Average gained 72 points on Friday after the August jobs report came in much weaker than economists had anticipated. The weak report zapped remaining hopes for an interest rate hike in September.

The odds of a September rate hike fell from 27% to as low as 12% on Friday, according to CME FedWatch.

Last month, the U.S. economy added 151,000 new jobs. That's well short of the 180,000 expected by Wall Street. While the unemployment rate remained at 4.9%, the strongest areas of job growth were found in bars and restaurants – not the most high-paying positions.

That doesn't inspire too much confidence in the U.S. economy.

The Federal Open Market Committee will kick off its next meeting on September 20. Both Fed Chairwoman Janet Yellen and Vice Chair Stanley Fischer have suggested that the central bank could hike rates by the end of the year. However, Chicago Fed President Charles Evans said last week that conditions do not suggest the Fed should rush the normalization of interest rates.

Now here's a look at today's most important market events and stocks, plus a preview of Tuesday's economic calendar. On Monday, the U.S. markets will be closed in observance of Labor Day.

The Dow Jones rallied after the odds of a September rate hike plunged after a weak August jobs report. Meanwhile, oil prices pushed higher as optimism grows about a production freeze. Crude had been falling in recent days over a rising supply glut in the continental United States.

Oil prices were on the rise after Russian President Vladimir Putin called on global oil producers to cap production levels. The statement comes just weeks before OPEC plans to meet in Algeria http://moneymorning.com/wp-admin/options-general.phpto discuss oil prices. Despite today's gains, oil prices had their worst weekly decline in eight months. The WTI crude oil price was up 2.5%, while Brent crude was up 2.7%.

But the big story that slipped under the radar was a warning from Jack Ma, the CEO of Alibaba Group Holding Ltd (NYSE: BABA)…

The Chinese billionaire said that globalization has a challenge. In the event that trade flows shut down, Ma projects that global war will break out. The statement appears to be a shot directly at Republican Presidential nominee Donald Trump, who has taken direct shots at China over trade deals and currency manipulation. Ma is also in the process of pushing a new electronic trade platform to help companies expand their global customer base.

Don't Miss: Here's why we are ranking AAPL stock a "Buy."